All foods lose quality and shelf life during distribution by virtue of microbiological growth, enzymatic activity, physical damage, and biochemical reactions, most of which are product interaction with the oxygen in the air and dissolved and entrained in the product. The kinetics of oxidation suggest that reduction of oxygen to near zero levels would exert profound effects on the biochemical quality, which is the major effect after biological stability has been achieved.

Action of Oxygen
Oxygen allows growth of aerobic microorganisms, and it is responsible for oxidation of lipids, color, and flavors, and loss of nutritional value (ascorbic acid degradation, vitamin E losses, and oxidation of polyunsaturated fats such as omega-3 and omega-6)—hence the importance of reducing oxygen in and around foods in order to prolong safe shelf life. Oxygen in the package headspace, oxygen entrained or dissolved in the food, and that which migrates from package exterior to the inside through the package structure are the principal sources of oxygen availability in the food product. Some food products that are especially sensitive to oxidative reactions are bakery goods, oils, dry milk, meats, beer, juices, coffee, nuts, cereals, and many fruits and vegetables.

Several methods to reduce oxygen in foods have been developed, including the use of oxygen scavengers, vacuum, oxygen-barrier packaging, and flushing with inert gases, among others. Current processing and packaging technologies are capable of decreasing oxygen concentration to up to 0.01%.

Micro-Oxygen: Definitions and Parameters
A new processing and packaging method is being proposed in this column: the use of micro-oxygen processing to extend shelf life of foods. Micro-oxygen processing is defined as the use of oxygen levels in both the product and the processing environment that would reduce biochemical reactions to levels that are too low to be measured by conventional methods as in beer or juice beverage preservation. University of Georgia Dept. of Food Science and Technology faculty and graduate students have hypothesized the existence of bound oxygen (as it has been demonstrated for water) that cannot be removed and that therefore may be available for food biochemical reactions. Since there is equilibrium between the oxygen present in the headspace and the oxygen dissolved or occluded in the food, if micro-oxygen levels are achieved in the processing environment, therefore the same levels of oxygen would be present in the food. The oxygen concentration necessary to be achieved for micro-oxygen processing has been targeted as 30 ppm, with lower levels hypothesized in future research.

Rationale for Micro-Oxygen Processing
Several factors, such as microbial growth, enzymatic activity, moisture, and oxidative and non-oxidative reactions, affect the quality of food. Even though foods such as canned goods may be microbiologically sterile due to heat treatment, for example, they still undergo biochemical deteriorative reactions in which oxygen generally acts as a co-substrate. Therefore, reducing oxygen would retard those reactions and would help extend quality and shelf life.

The objective is to produce foods that are shelf stable for a significantly longer time than is necessary to go through regular distribution channels or even for prolonged voyages to space. Previous information indicates that if shelf life is extended far beyond conventional commercial practice, the quality at any shorter time frame will be significantly better.

Oxygen reduction may retard the auto-oxidation reaction by reducing peroxyl free radical formation. The fried potato chip industry uses nitrogen flushing in the packaging process to displace most of the environmental oxygen and retard deteriorative reactions that lead to off-flavors. Argon also has been used to extend shelf life and improve product acceptability.

• Nutrient loss. As a result of oxidative reactions, some nutrients are lost. For instance, ascorbic acid can be oxidized, decreasing the nutritional value of citrus products. Vitamin E also oxidizes, donating hydrogen atoms in the presence of oxygen. Also, as mentioned above, polyunsaturated fatty acids such as omega-3 and omega-6 can be degraded.

• Color oxidation. Browning reactions in foods may be either non-enzymatic or enzymatic. Enzymatic browning requires oxygen. This kind of oxidation is seen in fruits such as bananas, apple slices exposed to air, apricots, and strawberries; in vegetables such as potatoes and lettuce; and in seafood. The reaction involves aphenolic substrate and oxygen along with polyphenol oxidase that catalyzes the reaction.

Polyphenol Oxidase and Oxidative Reactions
The fruit and vegetable industries suffer economic losses every year due to browning. Polyphenol oxidase (PPO) is a copper-containing enzyme that catalyzes the browning reaction, and, therefore, is important in determining quality of the food. PPO may be specific toward monophenolic and diphenolic substrates. The reaction consists of the hydroxylation of monophenols to o-diphenols by monophenolase or the hydroxylation of o-diphenols to produce o-quinones that are rapidly, non-enzymatically polymerized to brown pigments.

Several methods have been implemented to reduce PPO. Among them are inactivation by heating to destroy oxidative enzymes, application of ascorbic acid as an oxygen interceptor, reduction of oxygen, for instance, by vacuum or by inert gas flushing in the juice and wine industries, and use of cyclodextrin or polyvinylpyrrolidone for polyphenol (base color component) removal.

The two substrates of the reaction are phenolic compounds and oxygen. It has been proposed that oxygen is the first substrate that binds to PPO. If foods are processed and packaged under very low oxygen levels, one of the substrates is limiting. Therefore, it may be considered as a first order reaction. However, the order of the reaction is not fully understood, since PPO can still be active at low oxygen concentrations.

Low-Oxygen Processing of Beer and Citrus Products
Oxygen is necessary in some steps of the brewing process, but when the beer is finished and distributed, oxygen becomes a problem. As indicated previously in this column, based on 2005 research by University of Georgia graduate student Lynn Kuchel, oxidation reactions affect flavor, aroma, and color, decreasing the shelf life of the product by oxidation of fatty acids, alcohols, and iso-alpha acids. In the presence of oxygen, carbonyl compounds are formed, developing stale characteristics in beer.

Numerous efforts have been made to keep the total package oxygen as low as possible. For example, there is a BP Corporation patent for a plastic bottle that allows just 1 ppm of oxygen to ingress the package through the use of an oxygen scavenger, extending the beer’s shelf life for up to 6 months. Improvements in packaging have brought the total package oxygen to less than 50 ppb, but it is thought than even levels of 0.1 ppb are enough to cause oxidative damage.

Micro-Oxygen Processing of Bananas and Orange Juice
A team at the University of Georgia has conducted research to measure the effects of micro-oxygen on two products, bananas and orange juice. 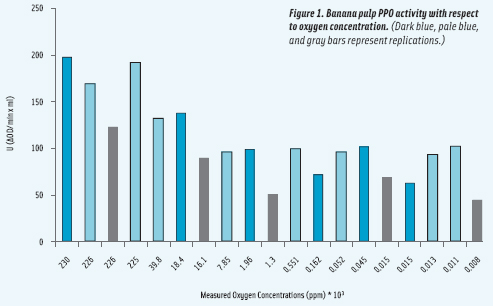 • Bananas. The effect of micro-oxygen on PPO activity was evaluated at atmospheric and ppm oxygen concentrations. PPO activity decreased nonlinearly with decreasing oxygen concentration from 198 units/mL to about 45 units/mL at atmospheric and micro-oxygen (8 ppm), respectively. The decrease in PPO with oxygen followed a second order polynomial regression (R2 > 0.9). This study shows that micro-oxygen levels as low as 8 ppm decrease PPO activity but do not eliminate it. It has been suggested that dissolved oxygen on the banana tissue as well as mechanisms of reaction of the enzyme may play a role in PPO activity, with 8 ppm oxygen enough to initiate the oxidation reaction. (See Figure 1.) 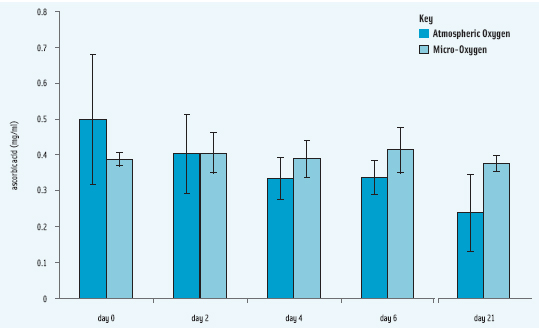 • Orange juice. In orange juice processing, the cells of fruit break, allowing air to come into the mix, along with the release of substrates and enzymes that were previously in compartment within the cells. Micro-oxygen processing decreases dissolved oxygen to 48 ppb at the moment of processing compared to 660 ppb of dissolved oxygen in orange juice processed at atmospheric conditions, which may result in extension of shelf life in addition to better retention of ascorbic acid content. (See Figure 2.)

Results from the University of Georgia research are clearly in the direction of demonstrating the positive quality retention benefits of reducing oxygen to micro levels for orange juice and suggest that more fresh-like orange juice and analogs are commercially feasible.