Welcome to the next generation of the American family—more ethnically diverse, cash-strapped, cuisine-savvy, and health-concerned than ever before. With new attitudes, lifestyle priorities, and product demands, today’s families offer a plethora of lucrative market opportunities for those food manufacturers who truly understand their fast-emerging needs. 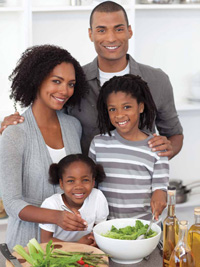 The more children there are in a household, the more likely its members are to cook at home, use pre-packaged convenience foods, and cut back on restaurant visits. Households with kids are among the most likely to entertain at home, to cook as a hobby, and to brown bag meals/drinks.

With Gen X (ages 35–44) and Gen Y (ages 18–34) parents being integral players in today’s foodie movement, expect all flavor and food forms to be kicked up a notch. Their penchant for freshness and cleaner labels will put more pressure on food marketers to reduce the use of additives/ preservatives and to lower sugar/sodium levels and will drive a strong demand for more minimally processed foods.

Moreover, they’ll force food marketers to enter the digital age. Moms in households with kids are among the heaviest bloggers/social networkers and the most likely to go online for recipes/cooking tips as well as key users of e-coupon websites.

It’s going to be a different food world out there, and this article is designed to be a guide to the new culinary, health, and restaurant behaviors shaping the food choices of tomorrow’s family.

Exploring Family Ties
The 35.7 million U.S. households with children under age 18 rank third behind empty nesters and singles as America’s largest household units. Married couples head 25.1 million households with kids, single moms head 8.3 million, and single dads 2.1 million. Among households with kids younger than 18, 79% have one or two children, and 21% have three or more (U.S. Census, 2010).

While 25 million households with children are headed by married couples, the rise in the number of single parents contributes to the fact that a growing number of families are strapped for both time and cash. A third of all families with children (13.4 million families) have income less than twice the federal poverty line, meaning that affordable family meals are in great demand (Urban Institute, 2010). In 2010, 23% of married couples with kids have a stay-at-home mom, up from 21% in 2000 (U.S. Census, 2010).

When it comes to targeting new moms, keep in mind that they’re likely to be older, more educated, unmarried, and nonwhite. Consider the following statistics about new moms: 14% are age 35+; 47% are nonwhite; 41% are unmarried; and 54% are likely to have some college education. Married women ages 25–34 have the highest birth rates; the average age at the birth of a first child is now 26 (Pew Research, 2010).

Home Time
For the majority of American families, the evening meal is now prepared at home an average of five times per week; the other two nights are equally divided between eating out and ordering in/picking up take-out (FMI, 2010a). Two-thirds (65%) of households with children are preparing more dinners at home now than they did last year; 90% of consumers think eating at home is healthier (FMI, 2010a).

Although, in a recent survey, half (49%) of meal preparers in family households reported making last night’s meal from scratch (i.e., primarily with fresh ingredients and no mixes), those in households without kids were more likely to do so and to use frozen or heat-and-serve foods (MSI, 2009).

But with today’s Gen Y and Gen X parents most likely to be classified as foodies and having the highest interest in ethnic, spicy, and gourmet foods, they’ll be looking for products that more directly deliver restaurant-style foods and flavors (Packaged Facts, 2009). For example, while Gen Yers are much more likely to buy very convenient meal kits, they are quickly gravitating to ethnic and upscale kits, e.g., Simply Asia or Wanchai Ferry.

Moreover, these parents have created the first generation of “foodie children,” and children’s food products need to be upgraded accordingly. More than half (52%) of kids ages 6–17 sometimes get to try new foods; that is always the case for 45% (Mintel, 2008). More than nine in 10 parents serve ethnic foods at home (Gallup, 2009).

The most popular ethnic or regional cuisines eaten by all kids are Chinese (57%), Mexican (55%), Italian (41%), and barbecue (37%) (Technomic, 2009). There are notable differences by ethnicity. Consumption of sushi is much higher among Asian and Hispanic kids, for example. Not surprisingly, Asian kids are much more frequent eaters of Japanese food (33%), noodles (37%), and Thai foods (19%).

But while two-thirds of moms plan to make easy-to-prepare meals at home more often this year, one-third (34%) also plan to cook more elaborate meals (WMR, 2010). With the penchant among Gen X and Gen Y consumers for fresh, globally flavored, restaurant-quality meals, products that assist with the preparation of more gourmet meals (spice rubs/blends, ethnic sauces, marinades, seasoned rice mixtures, etc.) rather than replace a specific menu item will be in high demand. You might say that brands that can act as sous chefs (vs acting as full-service chefs) will be able to capitalize on this new market opportunity.

Moms are more likely than other demographic segments to cook for fun; thus, products that facilitate greater interaction with their kids will find a welcome market. Moreover, mothers are among the most likely to embrace occasion-based cooking and to use gourmet foods for at home celebrations, e.g., birthdays and holidays (Mintel, 2008a).

Retailers can play an essential role in helping today’s home cooks: 49% of family shoppers want to receive easy-to-make recipes; 43% are looking for recipes for cooking a family dinner for $10 or less; and 23% want convenient placement in the store for the components of an entire dinner (FMI, 2010a).

Lastly, with two-thirds (65%) of families sitting down together for dinner and 50% gathering for breakfast five days a week, family-sized products targeted to households greater than four persons would help to fill a major market void (MSL, 2010).

Kids’ Picks
About half of meal preparers in households with kids served a meat, poultry, or fish/seafood entrée for a typical week’s dinner last year, slightly less frequently than households without children (Gallup, 2009). Chicken/turkey, followed by burgers, steak/beef roast, pork, hot dogs, and meatloaf were served by at least one in five family households.

Households with three or more children are significantly more likely than either one-to-two-child families or no-child households to serve a side salad; a rice, potato, stuffing, or pasta side dish; bread, biscuits, or rolls; and dessert, perhaps reflecting the tendency toward more scratch cooking, the need to “fill up” in larger families, and more importantly, the limitations of packaged dinners/kits that serve only 4 family member (Gallup, 2009).

The vast majority of kids (84%) consume pizza at least once a month. More than three-quarters of kids also eat French fries, cheese, and sandwiches one or more times a month; just over half have a taco (55%) or a salad (53%) in that timeframe (Technomic, 2009).

When children between the ages of 6 and 12 were asked to pick their own meal with an entrée, side dish, dessert, and drink, chicken fingers/nuggets was kids’ most popular entrée choice, followed by pizza, and then burgers. Steak, spaghetti, pasta, and shrimp were among the contenders in the 10-to-12-year-old group (Technomic, 2009). French fries and macaroni and cheese were the most popular sides. Those older than age 9 were more likely to choose a fresh fruit side; kids ages 10–12 were more likely to choose a side salad. Corn on the cob is another universal kids’ favorite.

Daily Dining Dynamics
Eight out of 10 moms report that their preteen child typically eats weekday breakfasts at home; 15% do so at school/day care (Gallup, 2008). Half (50%) of households with children eat breakfast together five days a week (MSL, 2010). Four in 10 Caucasian and Hispanic kids under age 17 (42%) don’t eat breakfast all the time; for blacks, the percentage is 59% (ADA, 2010).

Only one-quarter of kids ages 10–12 say they have access to a vending machine at school; vending machines are accessible at school to 10% of kids ages 8–9 and 8% of those ages 6–7. Fruit juices are the most purchased vended drink, cited by 38% of kids polled, followed by bottled water (37%), regular soda (34%), and sports drinks (29%). Candy bars, cookies, gum, fruit snacks, pretzels, popcorn, and trail mix are the most popular vended snacks (Technomic, 2009).

Although four out of 10 moms report their family is visiting restaurants less often than a year ago, most kid-dining occasions take place at quick-service restaurants (QSRs). Moms are about five to six times more likely to order from a fast-food restaurant once a week or more (45%) than fast casual (9%), casual dining (8%), or family-style (6%) eateries. African-American and single moms are the heaviest QSR users (Technomic, 2009).

The most popular types of lunch and dinner entrées on kids’ menus are pasta, sandwiches, and chicken. The most notable entrée trend is the growth of pasta and noodle items for kids; this entrée group pushed past chicken entrées and sandwiches to become the most frequently menued entrée for kids at full-service chains (Technomic, 2009).

Marketers should keep in mind that families with children like to socialize; more than half (56%) of parents with kids under age 18 entertain at least once a month; 21% of parents entertained more at home last year than in 2008 (GfK Roper, 2009). Households with kids are more likely to have a potluck meal, use convenient devices (e.g., slow cooker), or serve takeout or easily prepared microwaveable food to their guests (GfK Roper, 2009). Party-sized fare beyond lasagna and deli/appetizer platters—especially items with kid appeal—represent a big unmet need in the marketplace.

Happy About Healthy
More than one-third (37%) of mothers report that they are very satisfied with the healthfulness of their child’s diet (Gallup, 2010). Although half (49%) of shoppers with children think the foods they eat at home could be somewhat healthier, 29% think they’re healthy enough (FMI, 2010a).

Four in 10 shoppers with children (38%) are very/extremely concerned about the nutrient content of the foods they eat (FMI, 2010a). Four in ten parents with kids ages 6–18 (41%) admit that ensuring their children eat a nutritious diet is either a big problem (11%) or somewhat of a problem (30%) (FMI, 2010a). Six out of 10 families are practicing some form of healthy eating strategy. Their approaches include trying to eat more fruits/vegetables, whole grains, and low-fat dairy; limiting trans fats and sugar; reducing portion sizes and limiting second helpings; eating more seafood; and ordering healthier options when eating out (FMI, 2008).

Parents are slightly less likely to say they are extremely satisfied with the healthfulness of their children’s meals vs last year, especially when it comes to breakfast and dinner, thus increasing the majority who are only somewhat or not satisfied (FMI, 2010b). 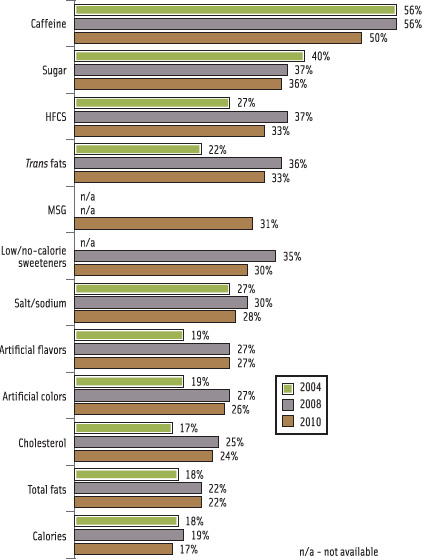 About one-third of mothers report strong efforts to increase their child’s consumption of calcium, vitamins/minerals, whole grains, and protein. Compared to 2008, there has also been a significant increase in efforts to get more probiotics/prebiotics into the diet (Gallup, 2010). The attributes moms most look for in foods for kids under age 3 include low/no sugar (68%), all natural (55%), fortification with DHA, iron, etc. (42%), and organic (21%) (Angrisani, 2010).

With the incidence of high blood pressure tripling in children, one in eight children already afflicted with two or more risk factors for heart disease, and pediatricians now measuring blood pressure in children at age 3, sodium levels in children’s foods will clearly come under greater scrutiny (AHA, 2010). Two-thirds (68%) of North American moms say they are very concerned about protecting their children from diseases later in life (HealthFocus, 2009).

In addition, with 38% of Gen Yers and one-quarter of Gen Xers citing protein as the most important component of healthy eating—right behind eating more vegetables/fruits and less processed foods—expect young parents to further embrace protein as a vital part of their healthy eating plans (Mintel, 2009c).

Lastly, 45% of parents with kids ages 12 and under agree there should be stricter guidelines regarding the nutritional content of kids’ menu options at restaurants; 42% of those with kids ages 13–18 feel that way (Technomic, 2009). So clearly it is important for product developers to factor health into the product development equation for both packaged foods and food-service fare.

IRI. 2010b. State of the snack food industry. Presented at Snaxpo, Fort Worth, Texas, March.

Mintel. 2009c. Attitudes towards food: Weight and diet—U.S. May.

U.S. Census. 2009. Households, by type, age of members, region of residence, and age of householder.