Nutritional oils reportedly benefit a range of health conditions, including heart health, weight management, and skin health. Cardiovascular health, in fact, is one of the factors driving increased liquid oil consumption, according to Gary R. List, a retired consultant for the U.S. Dept. of Agriculture, who spoke at the 2011 IFT Chicago Section Fred W. Tanner Lecture. Other health-related drivers include the new dietary guidelines for increased omega-3 and omega-6 consumption and trans fat nutrition labeling. While consumers recognize soybean, flax, and fish oil as healthy oils, others, such as canola, hemp, and marine-based oils, are also gaining in popularity. 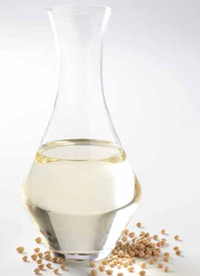 At the Tanner Lecture, List also described the new era of oils, which originated around 2006. This current phase in the oil industry is defined by the following factors:
• Impact of health and nutrition on the industry.

• Trait-modified oils as an important player in the food industry.

• Processor innovation to bring healthy oils and products to their customers by using new technologies (enzymatic treatment, fractionation, modified hydrogenation, and blending of hard/soft oils). Here is a look at some of this innovation and nutritional research changing the face of oils.

Soybean Oil
Soybean oil, which is low in saturated fat and high in polyunsaturated and monounsaturated fats, accounts for 65% of all vegetable oil used for human consumption in the United States, according to the United Soybean Board. Trait-enhanced soy oils offer improved functionality, little to no trans fat, and increased omega-3 fatty acid content. Low-linolenic soy oil was the first trait innovation to become commercially available. It delivers the benefits of lower trans fat levels in the direct replacement of lightly hydrogenated oil in a variety of applications.

Another trait enhancement, high-oleic soybean oil, will soon be commercialized. A trans fat solution, high-oleic soybean oil offers the benefits of less saturated fat and increased monounsaturated fat content, similar to olive oil (75% oleic acid). The oil will be applicable for a variety of heavy-duty frying and baking applications and as a spray oil and blending component.

Targeting a 2012 commercialization date, Plenish High Oleic (www.plenish.com) will offer an oleic content of more than 75% and less than 3% linolenic acid content. Last year, the USDA approved the Plenish high oleic soybean trait for cultivation in the United States.

Krill is a marine crustacean rich in EPA and DHA. Maki et al. (2009) concluded that supplementing the diet with krill oil for four weeks increased the plasma EPA and DHA in 76 overweight and obese men and women. They received 2 g/day of krill oil, menhaden oil, or control (olive oil) for four weeks. The results showed that plasma EPA and DHA concentrations increased significantly more in the subjects who took the krill oil and menhaden oil than in those who took the control.

Ferramosca et al. (2011) showed the benefits of krill oil on lipid metabolism in rats. The animals were treated for six weeks with diets containing 2.5% of krill oil or 2.5% of fish oil, or a control diet without supplementation of omega-3 fatty acids. The researchers monitored the activity of three key enzymes in the liver involved in the metabolism of fat. The study revealed beneficial effects of both the krill oil and fish oil supplements. The inhibition of the three enzymes was significant with krill oil and fish oil, but the response to krill oil treatment was more pronounced. The results also showed the fat-lowering effects from the oil supplements and confirmed previous findings that krill oil is effective in reducing liver triglyceride and cholesterol levels.

Aker BioMarine, Oslo, Norway (phone +47-24-13-0000, www.akerbiomarine.com), offers Superba™ krill oil, a pure, natural source of EPA and DHA and the naturally occurring antioxidant astaxanthin. The uniqueness of this ingredient is that the omega-3 fatty acids are provided in phospholipid form. The company announced in May 2011 that the U.S. Food and Drug Administration had evaluated via the New Dietary Ingredient Notification process the toxicology and clinical research data demonstrating the safety of Superba and had no objections.

Canola Oil
Derived from pressed canola seed, canola oil contains approximately 61% monounsaturated fat, 32% polyunsaturated fat (11% ALA, 21% LA), and 7% saturated fat, according to the Canola Council of Canada (www.canolainfo.org). It is also a source of omega-6 fatty acids. The FDA in 2006 authorized a Qualified Health Claim for canola oil based on its high percentage of unsaturated fats. The claim states “Limited and not conclusive scientific evidence suggests that eating about 1 and 1/2 tablespoons (19 g) of canola oil daily may reduce the risk of coronary heart disease due to the unsaturated fat content in canola oil. To achieve this possible benefit, canola oil is to replace a similar amount of saturated fat and not increase the total number of calories you eat in a day.”

Several companies offer higholeic canola oil, which contains more oleic acid and less polyunsaturated fatty acids, making it more stable with greater heat tolerance and longer shelf life. This year, Cargill Inc., Minneapolis, Minn. (phone 800-227-4455, www.cargill.com), introduced Clear Valley® 80 High Oleic Soy Oil, which offers the benefits of 0 g of trans fat/serving, low levels of saturated fat, and increased shelf life and stability. Cargill in 2010 introduced Clear Valley Omega-3 Oil. Made from canola and flaxseed, the oil contains up to 30% of ALA and provides a minimum of 160 mg of ALA in most applications.

Flaxseed Oil
Flaxseed oil is recognized for being a rich source of ALA. In a balanced diet, eating 5 g (1 teaspoon) of flax oil or 8 g (1 tablespoon) of milled flax daily provides enough ALA to meet dietary needs, according to the Flax Council of Canada. DeSpirt et al. (2009) demonstrated that supplements containing flaxseed or borage oil (2.2 g of total fatty acid) could benefit skin properties. Two groups of female subjects consumed flaxseed or borage oil for 12 weeks. The subjects in the control group received a placebo containing medium-chain fatty acids. The dose was 2.2 g of total fatty acids/day with ALA and linoleic acid as major constituents in the flaxseed oil and linoleic acid and gammalinolenic acid as the major constituents in the borage oil group.

Olive Oil
Olive oil is believed to be healthy thanks to its high monounsaturated fat content. Castañer et al. (2011) showed that olive oil polyphenols promote oxidized LDL autoantibody (OLAB) generation. Some data suggest a protective role of OLAB in atherosclerosis. Nakbi et al. (2010) concluded that the protective effect of olive oil against oxidative damage is mainly related to the antioxidant potential of its hydrophilic fraction. Samieri et al. (2011) suggested that there is a protective role for high olive oil consumption on the risk of stroke in older adults.

Other Oils
Growing from niche ingredients to more mainstream ingredients, other oils are gaining notice and appearing in more retail products. Chia seed oil is a rich source of ALA. Hemp oil is a source of omega-6 gamma linolenic acid (GLA), which is thought to have anti-inflammatory properties. Evening primrose oil is a source of linoleic acid and GLA. Black currant oil is used as a source of GLA. Rice bran oil provides a source of tocotrienols.