About one-third of the food produced globally for human consumption is lost or wasted, representing about 1.3 billion tons annually, according to studies presented at the recent Save Food International Congress co-sponsored by the Food and Agriculture Organization (FAO) of the United Nations and interpak 2011 trade fair. It is not sufficient to produce enough food to feed 6 billion people (world production can do that); that food must be available to those who need it.

The Save Food International Congress indicates a growing awareness of what happens to food after its harvested, and that food and packaging technologies can help reduce those losses. interpack is the largest packaging show in the world and includes an exhibition of processing and packaging equipment and materials. The 2011 show attracted 166,000 visitors from over 100 countries. Organizing the Save Food International Congress at interpack, therefore, represents a significant effort to build awareness of post-harvest efforts to reduce food losses.

Developed versus Developing Nations
A perhaps surprising finding is that “on a per-capita basis, much more food is wasted in the industrialized world than in developing countries,” reports the Global Food Losses and Food Waste study. “We estimate that the per capita food waste by consumers in Europe and North America is 95–115 kg/year, while this figure in Sub-Saharan Africa and South/Southeast Asia is only 6–11 kg/year.”

Food losses in the developing world tend to be related to financial, managerial, and technical limitations of food distribution between the farmer and the consumer. In contrast, food losses and waste in the developed world mainly relate to consumer behavior and “lack of coordination between different actors in the supply chain.” An example of the latter is much food is wasted because of quality standards that reject produce on the basis of size, shape, or color—factors that have nothing to do with safety.

Endorsed by IFT, the Global Harmonization Initiative (http://www.globalharmonization.net) was formed to promote food regulations based on food safety and to eliminate regulations that lead to destruction of tons of food for non-safety issues. This paper addresses post-consumer food waste. 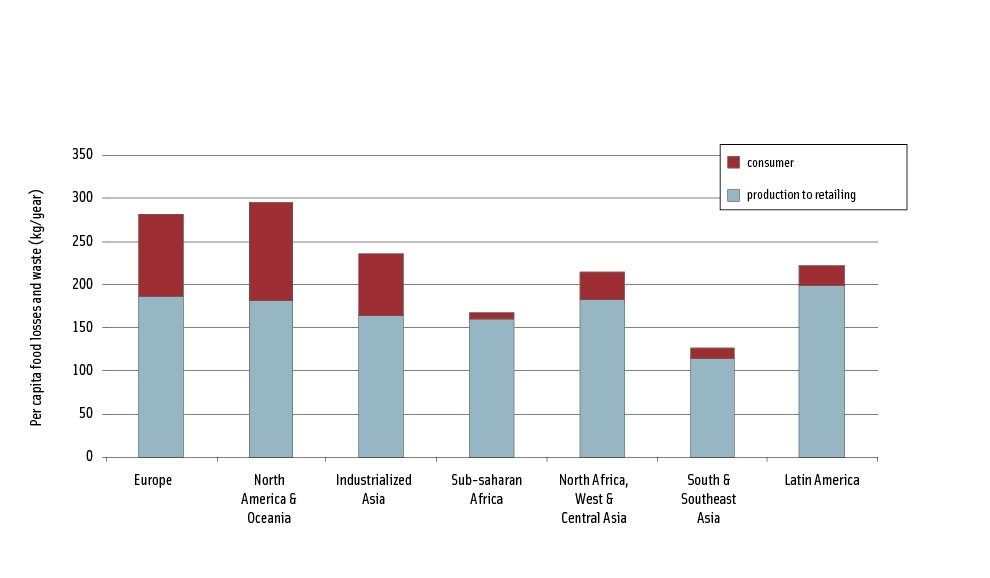 Consumers in the developed world waste vast quantities of food (Figure 1). Much food is discarded because it has reached its “best if used by” date (or variant). One speaker at the Congress asked if people throw out a TV set after its warrantee expires. No one wants to eat unsafe food, but most of the food discarded or not purchased and discarded is not based on safety. In fact, most foodborne illness reported in the media reflects food that was contaminated before packaging.

Consumers also often underestimate how much food they throw out. The German Federal Minister of Agriculture and Consumer Protection, Ilse Aigner, presented a challenge to the audience at the Congress to find a way to increase consumer awareness of food waste and work towards reducing food discards. I wish to offer a response to that challenge based on two existing programs that encourage awareness and recycling of resources.

Finding Solutions to Wastage
The 20-year-old German “Green Dot” (Der Grüne Punkt) program and its founder, Professor Klaus Töpfer, presented how an initially expensive and criticized program spawned a recycling industry that has saved resources, money, and energy. Packaging materials were collected, and the private sector developed uses for those materials. Perhaps a similar program can be engineered to build awareness and reduce food waste.

Food is a valuable resource and it makes sense to utilize food that is still good for human consumption.  Discarded food contains nutrients that could be returned to the soil instead of being buried in a landfill.  It also adds odor and sanitation risks to the waste stream. For all of these reasons, it is prudent to increase awareness of food waste entering municipal solid waste and work to reduce that waste.

Food waste reduction should take two forms: 1) waste less food and 2) find better uses for the discarded food. As an example of the latter, the municipality of Arles, France has installed recycling bins for food waste that is collected for commercial composting. Commercial composting creates temperatures that render the resulting compost free of food pathogens that might be present in the original food. Nutrients are returned to the soil instead of being buried.

A program that has been successful in building awareness and promoting recycling is Pay As You Throw (PAYT). Through PAYT, municipalities charge users for waste pick-up based on how much waste they present for collection as compared with a flat rate collected in municipal taxes. With a flat-rate system, users do not have to consider how much they discard. On the other hand, PAYT has numerous advantages for municipalities, consumers, and the environment. Recyclables are often picked up for free, so recycling is encouraged. A steady supply of recyclables allows businesses to depend on the supply and develop uses for these relatively inexpensive materials. Municipalities benefit from revenues from sale of recyclables. Shifting costs from property tax to PAYT offers more independence in management and finance of residential waste systems, and with awareness of discards, total quantities of waste decline. Consumers have the choice to reduce their disposal costs. The only downside is that PAYT costs are visible while flat-fee costs are not.

Can such systems work for food scraps? I propose a PAYT program for food in which food waste is deflected from the normal waste stream and put into special bags designed to contain the food and then degrade in commercial composting facilities. Revenues from the initial sale of the food bags added to municipal waste pick-up budgets will be required for construction of the commercial composting facility. But significant benefits will accrue with the system in place. These benefits include:

Food loss and waste are a huge global problem that will only accelerate as the population increases and food costs rise. The Save Food International Congress presented a challenge that must be addressed. Doing so now is in everyone’s interest.