Materials at the nanoscale level have different properties from those at the micro and macro levels, including chemical, biological, or magnetic properties; altered electrical or optical activity; increased structural integrity; or other unique characteristics. Two research approaches take advantage of these properties in the development of biosensors for detection of foodborne pathogens. 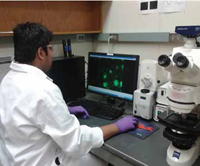 Electrophoretic Approach
Jun Li, Associate Professor of Chemistry at Kansas State University, is developing a pathogen-detection system that contains a biosensor based on dielectrophoresis. He and a graduate student, Lateef Syed, are using carbon nanofibers to form an array of tiny nanoelectrodes smaller than bacteria and viruses. When these microbial particles are captured at the electrode surface, an electrical signal can be detected. The goal of his research is to integrate this technology into a handheld electronic device for pathogen detection.

In standard electrophoresis, a high direct current (DC) voltage is applied between a pair of electrodes across a channel filled with buffer to generate an electrical field. Any charged particle within this field migrates through the channel at a rate dependent on the charge-tosize ratio. In dielectrophoresis, a polarizable particle, which may not carry net charges, is subjected to an electrical force under an asymmetric electrical field. The dielectrophoretic (DEP) force may pull the particle toward positions with higher electrical field strength (positive DEP) or push the particle to positions with lower electrical field strength (negative DEP), depending on the differences in conductivity and permittivity between the particle and suspending media. Li said that this technology has been known for more than a half century and has been used with microfluidics for concentration and sorting of cells. Most applications have dealt with large mammalian cells 10–20 microns (10,000–20,000 nm) in size and a few smaller cells. Detecting smaller particles such as bacteria and viruses is more challenging, he said. 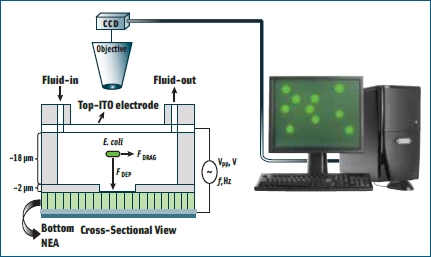 Li has a unique way to grow carbon nanofibers (CNFs) of approximately 100 nm in diameter vertically from a pre-patterned chromium and nickel electrical circuit. These CNFs as well as the circuits underneath it are then encapsulated with SiO2 to provide electrical insulation and mechanical strength. The excess SiO2 on the top is then removed by mechanical polishing and reactive-ion etching so that only the very end of the CNF tip is exposed. This embedded CNF nanoelectrode array chip is then packaged with a macro transparent conductive counter electrode to obtain a microfluidic device through which the sample solution containing pathogens can be passed. When a dilute solution of bacteria is passed through the microfluidic system, the electrical field is enough to capture them on the electrode surface, Li said, providing a quick way for concentrating the sample for further molecular analysis.

For example, if a mixture of bacteria and latex particles is passed through the device, the conductivity of the bacteria is much greater than that of the latex particle, so the bacteria will be pulled to the high field (i.e., toward the nanoelectrodes), and the latex particles will be pushed away. As a result, the system can pick out bacteria from other interfering particles, Li said, and under normal conditions can differentiate viruses from bacteria. The research so far has focused on Escherichia coli, but the same technology could also detect other pathogens, such as Salmonella and viruses. 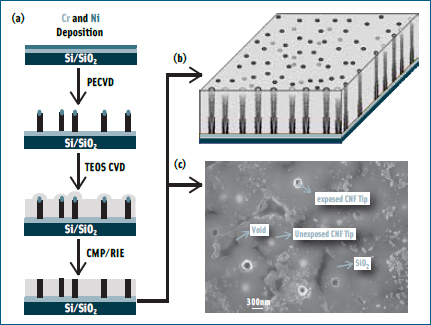 Li is working with Early Warning Inc. (www.earlywarninginc.com) to commercialize the system. The goal is to develop an integrated microfluidic device, including sample preparation and a detection module. Li is working on the sample preparation component, and Early Warning is developing the detection part based on a patent licensed from NASA, for which Li was a co-inventor. The integrated device would concentrate and capture the bacteria, lyse them to release their nucleic acid content, then hybridize the bacteria with a specific nucleic acid probe that generates an electrical signal that tells whether they are E. coli or other bacteria.

Li estimates that a commercial system will be available in 2 to 3 years. Early Warning already has a larger, inline system commercially available for an initial concentration of approximately 10 L of water sample into a 0.5 mL sample that can be input into the microfluidic chip. This combination, Li said, can provide continuous monitoring of very-low-level bacterial contamination in drinking water sources.

Spectroscopic Approach
Joseph Irudayaraj, Professor of Biological Engineering at Purdue University, is working to develop a biosensor for separation and detection of pathogens, using a combination of the unique optical properties of gold nanoparticles and the highly sensitive signals from surfaceenhanced Raman spectroscopy (SERS). The resulting system, he said, can provide a very sensitive sensor that might detect 10 cells/mL or even 1 cell/mL. The key benefit of nanotechnology in developing pathogen sensors, he said, is the increased limit of detection it offers.

Raman spectroscopy gives signals from molecules that vibrate at different frequencies because of specific chemical bonds. These signals can be related to polysaccharides, lipids, proteins, nucleic acids, and other compounds that are present in cells. In this technique, the target pathogen is exposed to spectroscopic light, and it is possible to get information from these molecules that constitute different chemical groups, Irudayaraj said. With normal spectroscopy, a high concentration is needed, but with Raman spectroscopy the fingerprints are enhanced as much as tenfold, giving rise to a highly sensitive, highly resolved fingerprint.

Different pathogens give different fingerprints, Irudayaraj said. On the macroscopic level, the bacteria are very similar, but because of the technique’s sensitivity, the pathogens exhibit very slight differences in scattering pattern, or fingerprint, enabling them to be identified. In addition, specific bacteria can be captured and detected by antibodies attached to magnetic and/or gold nanoparticles, providing an additional layer of specificity. This two-tier approach makes it a very reliable sensing device, he said.

Irudayaraj envisions the final product to be a laptop-type of box with gadgets, lasers, and other optics in it and a kit to treat the sample, requiring 1 hr or so. The system would produce an image or spectrum, which would tell whether pathogens are present. It would also tell whether the bacteria are dead or alive since they basically have different morphology and other fingerprints that might be different.

It’s a new concept to develop this device to provide very rapid and sensitive signals, Irudayaraj said. To commercialize it, technologies will have to be standardized, and a good commercial prototype Raman system needs to be tailored to specific bacteria. He and his colleagues have developed components of the device at Purdue’s Center for Food Safety & Engineering and are working with several companies to build the Raman spectrometer to the researchers’ specifications. He estimates that they are 1 to 2 years away from having a commercial device. He and his colleagues are also developing other complementary technologies for single-cell bacteria detection.

Some Commercial Applications
Among the commercial pathogentesting systems developed through nanotechnology are the following:

Nano Science Diagnostics Inc. (www.nanosciencediagnostics.com) offers a non-invasive, sensitive testing technology to detect within 15 min a wide range of bacteria and viruses. First developed for the U.S. Army to detect anthrax, the technology has been modified to develop test kits for food pathogens such as E. coli, Salmonella, and Listeria.

NanoLogix (www.nanologix.com) has developed a series of test kits to detect specific target bacteria 4 times faster than traditional Petri tests, detecting and identifying living microorganisms in as little as 4 hr, instead of up to 5 days.

These results are accomplished by use of a membrane with nano-sized pores that is sandwiched between two layers of growth agar in a Petri plate. Nutrients pass through the pores, and bacteria grow on the membrane. After a few hours, when the microorganisms are still invisible to the naked eye or even a microscope, the membrane is lifted off and transferred to a staining plate. After up to 15 min on the staining plate, live-cell micro-colonies can be viewed and counted. Because these micro-colonies are not allowed the time to grow larger and overlap, the method makes it easier to count the colonies and determine the density of the sample. A few additional filtration and washing steps allow for the identification of microorganisms being targeted in the sample.

The new technology is said to have advantages over other methods such as flow cytometry and polymerase chain reaction in both speed and ability to detect live cells.

FDA Issues Nanotechnology Draft Guidance
The U.S. Food and Drug Administration (FDA) announced on June 9, 2011, and published in the Federal Register on June 14, a draft guidance for industry regarding the agency’s thinking about whether FDA-regulated products contain nanomaterials or utilize nanotechnology. The draft guidance, “Considering Whether an FDA-Regulated Product Involves the Application of Nanotechnology,” is intended to help food industry professionals and others identify when they should consider potential implications for regulatory status, safety, effectiveness, or public health impact arising with the application of nanotechnology in FDA-regulated products.

It represents the first step toward providing regulatory clarity on the FDA’s approach to nanotechnology. The agency named certain characteristics—such as the size of nanomaterials used and their properties—that may be considered. The agency did not establish any nanotechnology-related definitions.

For products subject to premarket review, the FDA said it intends to apply the points contained in the draft guidance, when finalized, to better understand the properties and behavior of engineered nanomaterials. For products not subject to premarket review, the FDA will urge manufacturers to consult with the agency early in the product development process.

Comments were due August 15.

Nanotechnology Review Published
A literature review on food-related nanomaterials was published in the August 2011 issue of the Journal of Food Science. The article “A Brief Review of the Occurrence, Use, and Safety of Food-Related Nanomaterials” by Bernadene A. Magnuson, Tomas S. Jonaitis, and Jeffrey W. Card addresses the natural occurrence of nanomaterials in foods and the development of nanomaterials for specific applications, including ingredient development, product formulation, processing, packaging, and storage. It also addresses detection and characterization of nanomaterials, their safety with regard to oral exposure, and the potential for contamination of food.

Market Increases for Food Pathogen Testing
Testing for microbial contamination by the food industry in the United States is increasing, according to a market research report issued by Strategic Consulting, Inc. (www.strategic-consult.com) in July 2011. The report “Food Micro, Fifth Edition: Microbiology Testing in the U.S. Food Industry” says that the pathogen testing market increased by 18% from 2008 to 2010. Routine testing for indicators of microorganisms in food or processing plants increased by just over 10% during the 3-year period, the report says, but the volume of tests for specific pathogens increased by more than 30%.