Food safety is a major concern of the food industry, and instrumentation companies are continuously working on providing new and improved rapid methods for testing foods for pathogens. The Food Safety & Quality columns in April 2011 and November 2011 described various approaches and products for pathogen testing, and this month’s column discusses two additional products. 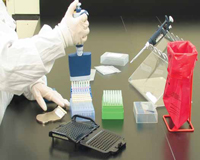 According to Niki Montgomery, Global Marketing Manager at 3M Food Safety, the system works as follows: Multiple primers recognize distinct regions of the genome, and a DNA polymerase with strand displacement activity continuously and rapidly amplifies the target DNA. This results in exponential generation of pyrophosphate as a byproduct of the DNA amplification. The pyrophosphate is enzymatically converted into adenosine triphosphate (ATP) by ATP-sulfurylase, and a thermo-stable luciferase reacts with ATP to generate light, which is detected in real time. Positive assay results indicating the presence of the target microorganism DNA are reported as early as 15 min into a 75-min run while negative results are reported at the end of the run. Results are displayed using easy-to-read color-coded icons and also reported in a graphical view.

Test kits are available for the detection of Salmonella, Escherichia coli O157, and Listeria. Because the DNA amplification is detected via bioluminescence, the system offers the unique use of color-coded assay tubes to differentiate pathogen assays, making it easier for technicians to work with the system. Each kit uses the same software interface and the same DNA extraction protocol for testing up to 96 samples per run. Amplification and detection conditions are the same for pathogen assays, which allows for assay setup and testing of all three assays in one run. The system also needs a laptop computer and an enriched sample. The method requires a single enrichment with incubation times varying from 8 hr to 24 hr, depending on the target microorganism and matrices, and only two sample transfers after enrichment.

The steps in the method are enrich, lyse, and amplify and detect. The user first sets up the run via the software, selects the location of a well or group of wells, clicks a color-coded assay icon to match the reagent tubes, enters the assay kit lot number, and assigns a sample ID. A barcode reader can also be used for data entry. The user then transfers the enriched sample to lysis tubes, heats the lysis tubes at 100° C for 15 min, chills them for 10 min, transfers the lysate to the reagent tubes, and places the reagent tubes into the instrument via a 3M Molecular Detection Speed Loader Tray.

Montgomery said that the system offers numerous benefits. Continuous amplification of DNA at constant temperature limits the possible interference of the template or DNA polymerase by inhibitors found in food samples, and detection during the exponential phase of amplification enhances specificity. In addition, detection by bioluminescence has a better signal-to-noise ratio than fluorescence; is not affected by interference from fluorophores that may be present in some samples, such as food dyes or acriflavin in enrichment media; and eliminates the need for high-cost excitation sources, fluorophores, fluorescent filters, and detectors. In addition, color-coded tubes to differentiate pathogen assays and pre-dispensed, ready-to-use lysis solution make the system easy to use.

She added that the system has been put through rigorous internal and external performance validation tests using many different food and environmental matrices. The validation included testing for matrices interference, inclusivity, exclusivity, accuracy, specificity, and sensitivity. External studies are also in progress with government, university, and independent laboratories and food processors around the world. The testing includes dairy, meat, poultry, processed/ready-to-eat foods, produce, seafood, spices, cocoa, nutraceuticals, and environmental samples. In addition, the company is pursuing global and local method validations, including submission to AOAC International for approval as a Performance Tested Method and an Official Method of Analysis.

Biosensor Being Developed
A handheld biosensor that can detect pathogens in about an hour without culturing is being developed by nanoRETE Inc. (www.nanorete.com). The nanoparticle-based biosensor, X-MarkTM, is said to provide high sensitivity and specificity but take less time for results. The company was launched in late 2011 to commercialize nanosensor technologies developed by Evangelyn Alocilja, Program Director of Michigan State University’s nano-biosensors laboratory and Chief Scientific Advisor to nanoRETE. The biosensor is based on nanoparticles with magnetic, polymeric, and electrical properties that have been conjugated with a monoclonal antibody for specific pathogens. The nanoparticles are coated with an electrically active film, polyaniline, and exhibit a specific resistivity or impedance. When the monoclonal antibody captures the pathogen of interest, the resistivity of the nanoparticle changes very quickly, and the change in resistivity graphically indicates the presence of the pathogen.

Using detection of E. coli O157:H7 as an example, Alocilja said that the nanoparticle (i.e., bead) is coated with a monoclonal antibody specific to that microorganism and is added to the sample to be tested. If E. coli is in the sample, it will attach to the antibody. Beads are then separated magnetically and placed on a screen-printed carbon electrode chip. A very small voltage is passed through the electrode, and a curve of voltage vs. current (or resistivity) is generated. If there is no change in the curve, then E. coli is not present. If a peak occurs, E. coli is present.

Sample preparation is minimal. Samples such as milk can be tested without preparation while samples with more complicated matrices, such as green leafy vegetables, must be mixed with an appropriate medium and homogenized. The sample in either case is then mixed with antibody-coated beads, which are then magnetically separated and placed onto the chip. Results are generated in about an hour from receipt of sample to final readout, quickly identifying contaminants so that action can be taken promptly. The system can test for multiple pathogens in the same sample by adding beads that have the antibody for the additional pathogen of interest.

Fred Beyerlein, Chief Executive Officer at nanoRETE, said that the system has been used to detect more than 35 pathogens with hundreds of confirmatory studies on E. coli O157:H7 and that the company is validating the assay against the gold standard, polymerase chain reaction (PCR). Results to date indicate more than 95% confidence that the assay provides the same results as PCR, he said. The benchtop prototype unit is being used for validation studies. The company expects to submit the system to AOAC International for approval as a Performance Tested Method within the next few months and to have a compact handheld unit available for beta testing by collaborating laboratories by the end of 2012.

Ranking the Health Impact of Food and Pathogen Combinations
A 2011 report from the University of Florida’s Emerging Pathogens Institute ranked the pathogen-food combinations that pose the greatest health risk to consumers. To prepare the report, researchers Michael B. Batz, Sandra Hoffmann, and J. Glenn Morris Jr. developed estimates of disease burden for 14 leading pathogens across 12 food categories (168 pathogen-food combinations). The 14 pathogens represented more than 95% of the annual illnesses and hospitalizations and almost 98% of the deaths in the United States over an 11-yr period, as estimated by the Centers for Disease Control and Prevention. For each pathogen, the researchers estimated health impacts in monetary cost of illness and loss of quality adjusted life years (QALYs), a measure of health-related quality of life.

They reported that the pathogen-food combination with the greatest impact was Campylobacter in poultry, followed by Toxoplasma in pork, Listeria in deli meats, Salmonella in poultry, Listeria in dairy products, Salmonella in complex foods, norovirus in complex foods, Salmonella in produce, Toxoplasma in beef, and Salmonella in eggs. The researchers cautioned that since there were significant uncertainties in the data sources and model assumptions used to obtain their estimates, their estimates should be regarded as an important starting point in an ongoing process to improve the understanding of the very complex interactions between pathogens and foods in the U.S. food system. The report, “Ranking the Risks: The 10 Pathogen-Food Combinations with the Greatest Burden on Public Health,” is available at www.rwjf.org/files/research/72267report.pdf.