Cheese has been a part of the human diet for thousands of years (Fox and McSweeney, 2004). Over the centuries, cheesemakers have relied on the indigenous microflora and enzymes naturally found in raw milk from domesticated animals to help develop the very specific signature quality traits of the hundreds of different types, styles, and varieties of cheese found around the world (Figure 1). Quality traits such as appearance, aroma, flavor, and texture are critical to the value that consumers place on the raw milk cheeses.

With the transition to pasteurized milk by most of the cheese industry, raw milk cheeses manufactured in the United States have survived as a niche market with very loyal customers. Today, the growing numbers of artisan and farmstead raw milk cheese operations are in response to consumer interest in locally produced and sustainable agricultural products (Figure 2), although the bulk of the raw milk cheeses continue to be manufactured by a few large-scale cheese companies. Of the 10.61 billion lb of cheese manufactured in the U.S. in 2011 (NASS, 2012), it is estimated that less than 1% was made from raw milk (Goddik, 2012). This article focuses on the quality traits of raw milk cheese and how and why they differ from pasteurized versions. 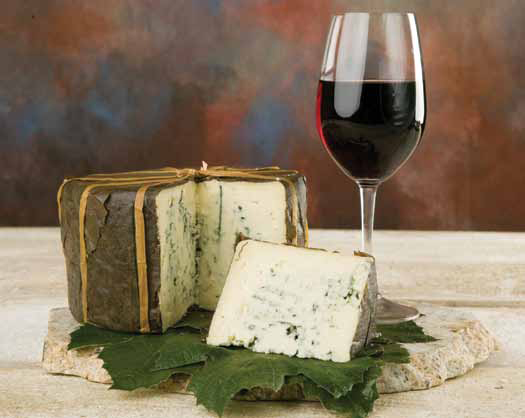 Milk Pasteurization
Throughout the centuries, the sanitation protocols for milk collection, processing, and cheesemaking were minimal or nonexistent by current standards. Cheesemakers occasionally had to contend with cheese of inconsistent or poor quality or short shelf life. The start of the industrial age led to larger pooled milk sources, larger scale cheese plants, and wider distribution of the product. Subsequently, food safety became a major concern as bovine tuberculosis, brucellosis, and typhoid fever were linked to consumption of raw milk (Holsinger et al., 1997). After the introduction of Louis Pasteur’s germ theory in the 1860s, milk producers began to heat treat their milk and, by the 1940s, most cheesemakers in the U.S. were using pasteurized milk to make their cheese.

Government regulations (FDA, 2012a, b) are now in place concerning heat processing of milk intended for human consumption and the mandatory sanitation protocols required for on the farm and in the cheese plant. Today’s dairy industry is focused on keeping Campylobacter jejuni, Escherichia coli O157:H7, Listeria monocytogenes, Salmonella, and enteroxin producing Bacillus cereus and Staphylococcus aureus from contaminating dairy products (Holsinger et al., 1997).

The current legal definition of milk pasteurization in the U.S. requires that every particle of milk is heated to a specific temperature and held continuously at or above that temperature for the specified time; i.e., 63°C for 30 min, 72°C for 15 sec, or 89°C for 1 sec (FDA 2012b). This heat treatment destroys all nonspore forming organisms in the milk, including pathogenic bacteria and most of the indigenous bacteria, yeasts, and molds.

In the 1950s, standard of identity for many cheeses was modified to include the statement that any cheese made from milk that was not pasteurized must be held at temperatures above 1.6°C for a minimum of 60 days before it could be sold in the U.S. (FDA 2012b). Therefore, fresh and young raw milk cheeses cannot be sold in the U.S.

About 30 of the 72 cheeses defined by the Food and Drug Administration (FDA) can be made legally from raw milk and sold throughout the U.S. (see Table 1; ACS, 2012b). The Centers for Disease Control (CDC, 2012) and FDA (FDA, 2012c) currently recommend that persons at risk, such as children under 5-years old, pregnant women, and persons with chronic diseases or suppressed immune systems, should not consume raw milk products.

Raw Milk Cheeses
To prevent pathogenic contamination, raw milk cheesemakers ensure that high quality milk from healthy animals is collected and processed under hygienic conditions. The main argument against pasteurization, as it relates to quality traits, is that the prolonged heating of milk destroys the advantageous enzymes and bacteria (and their associated enzymes) that impart the essential nuances to the texture, aroma, and flavor of cheese. Manufacturers of raw milk cheeses may heat shock their raw milk (60–65°C for 15 sec) to ensure that pathogens are destroyed but not long enough to kill all of the beneficial bacteria or inactivate the enzymes. However, this milk does not meet the legal requirements for pasteurization.

Reactions in Cheese
There are numerous components found in milk that are critical to the final quality of the cheese. The proteins, lipids, and carbohydrates are substrates for the biochemical and chemical reactions and microbiological activity that occur to produce the final cheese. These processes are driven by the enzymes in the milk, originating from either the mammary gland or the indigenous microflora, or are added during cheesemaking as coagulant or inoculated cultures.

Only one-third of the 60 estimated indigenous enzymes present in milk have been characterized, and only plasmin, cathepsin D, and lipoprotein lipase have been studied in cheese (Fox, 2003). Limited information on the other enzymes and whether they are inactivated during pasteurization makes it difficult to estimate their influence in cheese. Pasteurization is known to completely inactivate alkaline phosphatase, partially inactivate cathepsin D (Hayes et al., 2001) and lipoprotein lipase (Hickey et al., 2007), and disrupts the complex system of inhibitors and activators for plasmin, essentially increasing its activity in pasteurized milk (Prado et al., 2006).

The indigenous microflora found in raw milk brings an abundance of enzymes into cheesemilk that can be used by the bacterial metabolic pathways, secreted into the cheese, or released upon cell lysis. The enzymes include proteases, peptidases, lipases, esterases, lactases, decarboxylases, dehydrogenases, and synthases among others (Beuvier and Buchin, 2004; McSweeney and Fox, 2004; Upadhyay et al., 2004).

A recent study of Vermont farmstead raw milk cheese operations found that 86% of the milk samples had <10,000 SPC with 42% <1,000 SPC (D’Amico and Donnelly, 2010). The American Cheese Society (ACS, 2012a) reports that about two-thirds of their members exceed federal regulatory standards, follow a Hazard Analysis & Critical Control Points (HACCP) plan, and adhere to ACS-recommended best practices.

Microflora in Cheese
Extensive research has been conducted since the early 1900s to identify the bacteria that are responsible for imparting the quality traits for specific cheeses.Today’s culture supply companies have extensive inventories of lactic acid bacteria (LAB), nonstarter lactic acid bacteria (NSLAB), and adjunct cultures for making many different types, styles, and varieties of cheese. Most commercial products feature only a few cultures that, when added to pasteurized milk, result in a fairly homogenous microflora. 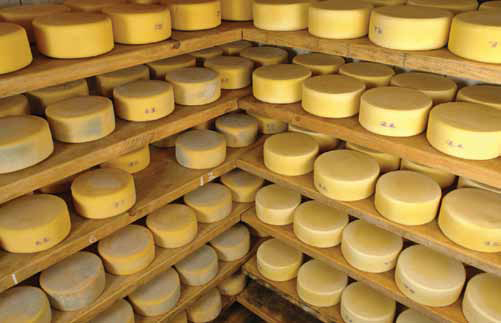 LAB cultures are responsible for the initial conversion of lactose to lactic acid and decrease of pH in cheesemilk. They also contribute peptidases, lipases, and esterases during the aging process. The NSLAB and adjunct cultures have minor roles in the cheese vat and are the major contributors of the proteases, peptidases, lipases, and esterases needed for the long-term development of the cheese characteristics. Manufacturers of both raw and pasteurized milk cheeses utilize commercial dairy cultures to control spoilage bacteria, ensure that the desired conditions for optimal cheesemaking are created in the vat, and, once the cheese is removed from the vat, provide the enzymes needed for the development of desired quality traits during aging (Figure 3). The LAB are found in high numbers, 108–109 colony forming unit (cfu) g-1, in fresh cheese and decrease during aging while NSLAB and adjuncts start off at lower numbers, 103–104 cfu g-1, and increase during aging.

Texture of Raw Milk Cheeses
Cheesemakers carefully select protocols and control vat conditions to form the protein matrix in which the fat, liquid, and bacteria are entrapped. The composition and organization of the matrix is specific for the type of cheese being made and is dynamic during aging, changing over time according to internal (substrates, enzymes, microbiology, and microenvironment within the matrix) and external (temperature, humidity, packaging material) factors. Cheese texture typically reflects the macro changes occurring in the protein matrix as proteolysis and lipolysis lead to matrix degradation.

Flavor & Aroma of Raw Milk Cheeses
Flavor and aroma compounds are generated within the microenvironment of the cheese matrix under a complex secondary phase of hydrolysis and synthesis that includes a wide array of proteins, peptides, amino acids, free and volatile fatty acids, carbonyl compounds, alcohols, esters, sulfur compounds, and hydrocarbons (Beuvier and Buchin, 2004). Although the same compounds may be found in the cheeses, the rate and concentration in which the compounds degrade or appear are different in raw and pasteurized milk cheeses (Beuvier and Buchin, 2004; Burbank and Qian, 2008; Van Leuvan et al., 2008). Although the differences in compounds noted between raw and pasteurized milk cheeses are thought to be associated with the activity of the NSLAB and their enzymes (Albenzio et al., 2001), the species and strains of the bacteria are major factors in addition to bacterial counts (Rehman, 2000; Beuvier and Buchin, 2004).

The resulting flavors and aromas of these compounds are the quality traits that consumers judge. Raw milk cheeses are found to ripen faster and therefore have stronger flavors and aromas than pasteurized milk cheeses of the same age, giving aged raw milk cheeses more complex and richer flavor (Beuvier and Buchin 2004). Profiles for raw milk cheeses tend to use strong descriptors such as animal, spicy, pungent, and intense while milder descriptors such as fruity or sweet are used for both raw and pasteurized cheeses. Some descriptors can be used for a variety of compounds, for example, bitterness is associated with the hydrophobic ß-casein peptides, indole, amines, amides, or long-chain ketones. Flavor profiles also are dependent on the style, type, or variety of cheese with higher moisture cheeses ripening faster than low moisture cheeses. Raw milk Cheddar received higher scores than the pasteurized version up to the age of 6 months, when defects began to appear (Rehman et al., 2000).

Raw milk cheeses are classified as specialty cheeses and sold as value-added products. Consumers who purchase specialty cheeses tend to have a higher education and a willingness to try new flavors and pay higher prices for food (Colonna et al., 2011). Flavor comparison studies show marked differences between many cheese types made from raw or pasteurized milk (Fernandez-Garcia et al., 2002; Van Leuven et al., 2008). In a large West Coast consumer study, participants preferred raw milk Gouda over the pasteurized version 2:1 while raw milk Cheddar was preferred by 48% and the pasteurized version by 36%; 11% could not tell the difference nor had any preference (Colonna et al., 2011).

Research has shown that there are differences between raw and pasteurized milk cheeses and has explored the microbiological, biochemical, chemical, and physical reasons behind the differences. At the end of the discussion, it is the preference and acceptance of raw milk cheese by the informed consumer that matters.

*USDA is an equal opportunity provider and employer.