March 1, 2012
Share +
The first of the Baby Boomer generation turned 65 years old in 2011. The number of people age 65 and older is predicted to rise from 40.2 million in 2010 to 88.5 million in 2050, with the highest rate of increase among those 85 and older (Ewing, 2012). With this shift in the age demographics, the growing number of aging Baby Boomers will continue to look for ways to live their lives as healthfully as possible. 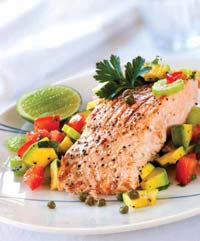 Antioxidants such as vitamin C, vitamin E, and selenium are promoted in multivitamins for overall wellness for Baby Boomers, but as specific health concerns arise, these and other nutrients may add additional benefits. “In my opinion, some of the major health concerns that come to mind as any of us age have to do with our heart health, primarily, as well as bone and joint health, arthritis, cognitive function, and, of course, weight management,” says Jayesh Chaudhari, Senior Formulation Scientist, Fortitech Inc., Schenectady, N.Y. (phone 518-372-5155, www.fortitech.com). “It seems that the current generation of Baby Boomers is taking proactive steps to aid in maintaining the health of our heart, bones and joints, and brain and at least attempting to maintain a healthy weight. In addition to this, people seem to be looking for condition-specific products that can help them address these health conditions.”

Here is a look at some health concerns and the ingredients that may address them and help us age gracefully.

Cognition
Focus, clarity, age-related mental decline, Alzheimer’s disease. These are some of the brain health conditions and diseases that concern the aging population. Omega-3 fatty acids, botanicals, citicoline, and others recently have been shown to help brain health.

Research has shown that citicoline may speed up formation of brain cell membranes and benefit production of neurotransmitters essential to brain function. Kyowa Hakko USA, New York, N.Y. (phone 212-319-5353, www.kyowa-usa.com, www.cognizin.com), offers Cognizin®, a branded form of citicoline. Scientific studies have indicated that the ingredient maintains normal cognitive function with aging by protecting neural tissue from free radical damage. Deborah Yurgelun-Todd, a researcher with the University of Utah’s Brain Institute, discussed in 2011 her research on Cognizin and brain health in an interview with Natural Medicine Journal (Kyowa, 2011). The results found that subjects who received either a low (250 mg) or high (500 mg) dose of the ingredient produced fewer errors during performance testing compared to those who received a placebo. She also highlighted the results of a six-week neuroimaging study where the subjects took a daily oral dose of either 500 mg or 2,000 mg of Cognizin. The subjects showed improved accuracy in generating correct responses, better spatial memory retrieval, and increased brain metabolism after taking the ingredient for the test period. The results were nearly identical for subjects taking either dose, confirming that statistically significant improvements in attention, focus, memory, and recall can be achieved at dosing levels of 500 mg of Cognizin.

A range of vitamins, minerals, omega-3 fatty acids, and carotenoids has been linked to a reduced risk of AMD. Vitamin E, folate, vitamin B-6, and vitamin B-12 have shown benefits. Supplying an adequate amount of vitamin A or beta-carotene, which is converted to vitamin A in the body, is vital for good vision. Vitamin C functions as an antioxidant and has been associated with a reduced risk of developing cataracts. DHA is an important component of retinal pigment cells and is vital to the optimum function of the retina throughout life. A high intake of DHA and EPA has been associated with a reduced risk of AMD.

The two carotenoids lutein and zeaxanthin are located in the macula of the eye and are believed to help maintain sharp and focused vision and are able to absorb harmful blue light, which can damage the retina. DSM offers FloraGLO® lutein (FloraGLO is a registered trademark of Kemin Industries Inc.), Optisharp® zeaxanthin, life’sDHA™, Ropufa® omega-3, vitamins, and minerals.

Bone and Joint Health
Mobility, which is affected by bone and joint health, is important to the aging population. “By far, calcium and vitamin D have been the mainstay ingredients in bone health-promoting products,” says Chaudhari. “However, there is growing consumer interest in other ingredients that could promote optimal bone health, including magnesium, vitamin K-1 and vitamin K-2, vitamin C, and possibly some botanical compounds such as those found in tea or soy.”

AIDP Inc., City of Industry, Calif. (phone 866-292-6699, www.aidp.com, www.koact.net), featured KoAct® calcium collagen chelate in a chocolate raspberry bar at the 2011 SupplySide West Show. The ingredient is a patented chelated compound of calcium and hydrolyzed collagen peptides (collagen I) that increased bone mineral density and bone strength in an animal model of osteoporosis.

Glucosamine and methylsulfonylmethane (MSM) are two popular joint health ingredients. Cargill Corn Milling, Wayzata, Minn. (phone 888- 734-3627, www.cargill.com), showcased a juice drink with glucosamine at the 2011 SupplySide West show. The company’s Regenasure® glucosamine is vegetarian and GRAS and is produced in the United States from a common, naturally occurring source.

Muscle Mass
An estimated 30% of people 60 years and older and 50% of those aged 80 and older may experience a loss of muscle mass, function, and strength. Emerging research suggests that the total protein intake for older persons should actually be 1–1.5 g/kg/day. As 15–38% of older men and 27–41% of older women ingest less than the recommended daily allowance for protein, it is suggested that protein intake be increased.

“Many of dairy’s benefits are of particular interest to seniors looking to maintain a healthy, active lifestyle,” says Mickey Rubin, Vice President, Nutrition Research, Dairy Research Institute®, Rosemont, Ill. (USDairy.com/DairyResearchInstitute). “Nutrition research continues to build support for the valuable role of dairy ingredients in maintaining good health, including strong muscle and bones.” Better understanding of the nutritional value of dairy and dairy ingredients in the aging and other populations is a priority for the Dairy Research Institute, an organization established by America’s dairy farmers and funded through the dairy check-off program.

“The nutritional benefits of dairy products and ingredients dovetail perfectly with aging-related health concerns,” says Vikki Nicholson, Senior Vice President, Global Marketing, U.S. Dairy Export Council (USDEC), Arlington, Va. (phone 703-528-3049, www.usdec.org). “Foods made with dairy are desirable to consumers and are perceived as natural and wholesome.” Food and beverage manufacturers can leverage whey protein in product innovations to reach the mature consumer interested in maintaining muscle strength to support their active lifestyle. Other dairy ingredients and products like milk protein concentrate and yogurt also provide valuable benefits to the aging. The USDEC works in partnership with university-affiliated dairy research centers, part of the National Dairy Foods Research Center program, to help companies innovate and improve food and beverage products using U.S. dairy ingredients. It has developed a number of prototypes utilizing dairy ingredients to target the aging population, including Sweet Potato Bread Pudding for the Ages, which it showcased at the 2011 IFT Food Expo®.