Mixing and dispersion processes can be described according to several different characteristics. First, what is being mixed: solids with solids, solids into liquids, or liquids with other liquids. In the last case, the liquids may be miscible or immiscible, meaning they either are soluble in each other or not. Oils do not want to mix with water, yet many foods require just that. 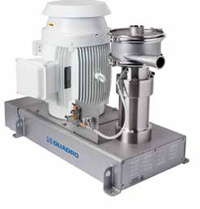 Further, mixing processes can be distinguished by how much energy is provided and how it is delivered. Difficult mixing tasks typically demand more energy, to reduce particle size, to overcome surface tension, and to reduce droplet size. On the other hand, too much energy may destroy fragile particles, generate too much heat, or incorporate too much air—not to mention waste money.

There are many proprietary mixer designs, often developed to address one specific challenge and then applied to other situations. A few representative examples will be discussed here; almost all have comparable competitors.

High Shear
High shear mixers are used to disperse solids in liquids, such as starches and gums in ice cream mix, or fats in liquids, such as butter into sauces. They may be batch or continuous. The Breddo Likwifier, sold by Caravan Ingredients, North Kansas City, Mo. (www.breddo.com, phone 800-669-4092), is a square or cylindrical vessel with a bottom-entering agitator. There is a range of volumes available, and the vessels can be jacketed. Normally, the mechanical seal of a bottom-entering agitator is a maintenance challenge because it is immersed in the mixture, which may contain abrasive particles. Breddo claims that its external seal can be easily accessed for repair.

Typically, an application engineer helps a customer select the specific style and size for a given application. Immersion high shear mixers are available in pilot-scale sizes to allow trial and development. Likewise, the specific design of stators may vary for different applications.

In-line high shear mixers are used in once through or recirculating modes. One way to visualize such mixers is as inefficient centrifugal pumps because they usually consist of a rotor or impeller inside a circular casing. Some may have multiple rotors and stators (stationary plates, with or without pins projecting from the plate). Quadro Engineering Corp., Waterloo, Ontario, Canada (www.quadroytron.com, phone 519-884-9660), offers a range of such machines, including the relatively new Quadro® HV-Emulsifier and Wet Mill, which is described as achieving wet milled particles as small as 10–15 μm. The same machine can be used to make emulsions and suspensions, and to feed high pressure homogenization. In that application, the capacity of homogenization is increased because the work of droplet size reduction is shared.

Low Shear
At the other extreme of mixing intensity are situations in which particles are fragile or differ widely in size, yet must be evenly dispersed. Examples include salads, seasoned meats, and confectionery mixes (think “bridge mix,” containing Brazil nuts, peanuts, and sunflower seeds).

In general, a gentle approach to mixing is tumbling in a vessel or container. Examples include “V” blenders, double cone blenders, and machines that tumble closed containers. One manufacturer of tumbling blenders is Buflovak LLC, Buffalo, N.Y. (www.buflovak.com, phone 716-895-2100). Buflovak bought the assets of Patterson-Kelly, and now offers the P-K line of mixers. Some of the previously mentioned firms, such as Ross, also offer solids blending equipment.

Totes or wheeled buggies are a material handling system that can be integrated with mixing. Typically, totes are moved by fork truck and have a conical or sloped bottom for solids discharge. Buggies usually have a lid and are emptied by dumping.

Competing manufacturers of stainless steel totes include Matcon USA Inc., Sewell, N.J. (www.matconibc.com, phone 856-256-1330), and Tote Systems, Fort Worth, Texas (www.totesystems.com, phone 888-862-6176). Totes are generically a form of intermediate bulk container (IBC); other forms are made of corrugated paper, plastic, or fabric (as big bags). The advantages of IBCs include reduced manual handling, easier automation, and protection from contamination since such containers are usually closed.

One manufacturer of buggies is CM Process Solutions, Corona, Calif. (www.cmpsolutions.net, phone 951-808-4376). With reusable IBCs, there is a need for cleaning after one or more uses. This is usually done in automated equipment that can be compared to a small car wash. CM Process Solutions provides the cleaning systems as well as the buggies.

In addition to the cleaning systems, an IBC system also needs specialized equipment for loading, moving, mixing and unloading the containers. Other types of solids mixers may also need specialized arrangements, such as support frames to take advantage of gravity flow, but otherwise may use conventional material handling methods, such as pneumatic conveyors.

Material Handling
Material handling of solids is a very important consideration for mixtures because almost any source of motion can affect segregation.

Segregation, or unmixing, is unique to solids mixtures and suspensions. In the case of solids mixtures, segregation is caused by size and density differences. Simply pouring a solids mixture into a pile may cause separation of large from small particles. Thus transport and filling can undo the careful mixing performed earlier. One advantage of an IBC system is that the entire vessel can be tumbled just before emptying. But then care must be taken in subsequent operations to prevent segregation.

Another approach, for which I can claim some credit in one application, is to formulate one final container at a time. We called this blend in can (BIC), when it was applied to a liquid mixture case that formerly had been prepared in large batches. The primary advantage was the ability to make exactly to order, reducing inventory that risked becoming outdated.

In another application, independently developed, a mixture contained a wide range of ingredient sizes, from fragile large pieces to fine powders. Any such bulk mix would rapidly segregate. Instead, the individual components were deposited in final containers. The consumer shook the container gently before opening to use.

Master Batch or Pre-blend
In almost any mixture there is a range of components. A typical distribution is as follows: major >10%, minor 1–10%, and micro <1%. Different dividing points may apply in various cases, but the point is that there almost always is a wide difference among the amounts of the various components. Often, the minor and micro components are the functional ingredients, such as the active pharmaceutical ingredient (API) in a medication. Not only must the active ingredient be evenly distributed, it also may be the most expensive, may be hazardous, and may be difficult to handle. In foods, the minors and micros might be flavors, nutrients, and colors.

One approach to mixing micros and minors efficiently is to mix some or all of them with some major ingredient in a pre-mix. It is almost always easier to evenly disperse roughly even amounts of materials in each other. It also reduces time and manual labor to reduce the number of additions to a batch.

In a continuous mixing system, which is a collection of feeders, there may be a limit to the number of nozzles or points of addition. This can be another reason for considering a pre-mix.

Obviously, preparing the pre-mix is another mixing challenge. Typically it is done in smaller, but similar equipment to that the final mixing uses, but it might be done in a lab, and it might involve liquids that are added to a solid carrier. The components of the pre-mix must be stable and compatible with each other. Thus one would not mix baking powder into an aqueous solution because the moisture would prematurely activate the leavening.

An obvious benefit of pre-mixing is that a pre-mix for several batches can be made at once, reducing the number of weighing and mixing steps, thus increasing production. When minors and micros are not compatible, some benefit is realized by having these ingredients weighed out separately in advance and provided as a kit for each batch. This simplifies the mixer operator’s task and reduces potential errors.