The American Heart Association (AHA) in 2011 set a goal for America to improve the cardiovascular health of all Americans by 20% and to reduce deaths from cardiovascular diseases and stroke by 20% by 2020. Improving diets will be the key to reaching this goal. Today, more products are hitting market shelves that help promote heart health, affecting blood pressure, cholesterol, or overall cardiovascular health. 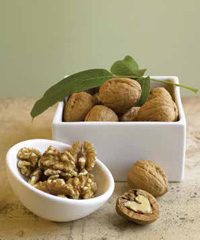 For more than 15 years, the AHA has helped consumers find heart-healthy foods and beverages with its Heart-Check program. Food companies can certify products to use the red-and-white Heart-Check mark. According to the AHA, research shows consumers are more likely to buy a product bearing the symbol. The organization in 2011 expanded and improved the Heart-Check Food Certification Program, allowing certification of more foods with healthier fats, including fish, nuts, and other foods higher in monounsaturated and polyunsaturated fats. The AHA also revised its sodium allowances and implemented screening guidelines to limit added sugars and promote dietary fiber in certified products.

With research uncovering cardiovascular benefits of whole foods as well as food ingredients, food and beverage manufacturers will have ample resources to create heart-healthy products consumers are looking for. Here is a look at some of the options.

• Potatoes. Vinson et al. (2012) showed that purple potatoes were an effective hypotensive agent. The potatoes contain high concentrations of antioxidants, including anthocyanins and carotenoids. In a crossover study, 18 hypertensive subjects with an average BMI of 29 were given either 6–8 purple potatoes twice daily or no potatoes for 4 weeks and then given the other regimen for another 4 weeks. There was no significant body weight increase, and diastolic blood pressure decreased 4.3% while systolic blood pressure decreased 3.5%.

• Raisins. “Raisins deliver dietary fiber and beneficial nutrients like potassium and antioxidants associated with cardio-protective benefits such as reduced blood pressure,” said James Painter, Nutrition Research advisor for the California Raisin Marketing Board, Fresno, Calif. (phone 559-248-0287, www.loveyourraisins.com), and a registered dietitian. Research presented at the American College of Cardiology’s Scientific Session in March 2012 suggested that eating raisins three times a day may significantly lower blood pressure among individuals with slightly higher than normal blood pressure. The study included 46 male and female subjects with prehypertension. The subjects were randomly assigned to snack on raisins or pre-packaged commercial snacks that did not contain raisins or other fruits or vegetables three times a day for 12 weeks. Data analyses revealed that compared to other popular snacks, raisins significantly reduced systolic blood pressure at weeks four, eight, and 12. The results also showed that raisins significantly reduced mean diastolic blood pressure at all study visits, with changes ranging from -2.4 to -5.2 mmHg.

Painter suggests that the beneficial effect on blood pressure may be due to the high potassium and low sodium contents of raisins, compared to pre-packaged snacks. Raisins also contain soluble fiber and antioxidants, which contribute to their effect on reducing both LDL cholesterol and LDL oxidation. Current research is looking at the effect of raisins on blood pressure and cholesterol in diabetic subjects, said Painter.

Nuts
• Almonds. Almonds provide 13 g of unsaturated fat/ounce and 1 g of saturated fat, and they are naturally cholesterol-free. Almonds also deliver protein (6 g), fiber (3.5 g), calcium (75 mg), vitamin E (7.4 mg), riboflavin (0.3 mg), and niacin (1 mg), all of which contribute to a healthy heart. One ounce of almonds meets 35% of the daily required value of vitamin E. The results from nine clinical studies conducted in the past 17 years show the beneficial impact almonds have on cholesterol, and even influenced the very first qualified health claim for nuts, linking them to a reduced risk of heart disease.

• Walnuts. Walnuts are a rich source of protein, polyunsaturated fats, vitamins, minerals, fiber, antioxidants, and omega-3 fatty acids. Ma et al. (2010) showed that eating 2 oz of walnuts/day as part of a normal diet may improve cardiovascular health in people with type 2 diabetes. The researchers randomly assigned 24 subjects with type 2 diabetes to either receive an ad libitum diet enriched with 56 g of walnuts/day or an ad libitum diet without walnuts for eight weeks. Endothelial function significantly improved after consumption of a walnut-enriched ad libitum diet, suggesting a potential reduction in overall cardiac risk.

• Pistachios. Baer et al. (2012) showed that after eating pistachios, LDL cholesterol levels were lowered. In the crossover feeding study, 16 subjects consumed pistachios for three weeks as part of a controlled diet. The doses of pistachios were 0, 42, and 84 g/day. The pistachio nut intervention lowered LDL-cholesterol by 6%, but did not significantly change plasma total cholesterol, HDL cholesterol, or triacylglycerols.

• Pecans. Nearly 60% of the fats in pecans are monounsaturated and another 30% are polyunsaturated, leaving very little saturated fat in pecans. Hudthagosol et al. (2011) showed that after eating pecans, gamma-tocopherol levels in the body doubled and unhealthy oxidation of LDL cholesterol in the blood decreased by as much as 33%. For the study, 16 male and female subjects ate a sequence of three diets composed of whole pecans, pecans blended with water, or a control meal of equivalent nutrient composition. The pecan meals contained about 3 oz of the nut. In the subjects who consumed the whole-pecan meal, oxidized LDL cholesterol decreased by 30% after two hours, 33% after three hours, and 26% after eight hours.

Beta-glucans
• Barley. Cargill, Minneapolis, Minn. (phone 800-227-4455, www.cargill.com, www.barliv.com), in January 2012 received approval from Health Canada for use of its Barliv™ barley betafiber as a novel dietary fiber in Canada. The ingredient is a soluble fiber extract derived from whole-grain barley, and it has been clinically shown to lower cholesterol. In both the U.S. and Europe, qualified products made with Barliv can carry a health claim stating that they reduce the risk of coronary heart disease.

Oils
• Canola oil. “There shouldn’t be anybody in America who doesn’t have a bottle of olive oil and canola oil in their kitchens,” said Mehmet Oz in his television show, “Dr. Oz Show,” earlier in 2012. Canola oil was featured as one of the five essential, healthy cooking oils (those high in monounsaturated fat and low in saturated fat) to have at home. Canola oil is high in omega-3 alpha-linolenic acid, an essential fatty acid, with 2 g for every 10 mL of oil. Canola oil is also a rich source of omega-9 and moderate source of omega-6 fatty acids. When canola oil displaces saturated fat in the diet, studies show it decreases total and LDL cholesterol. The U.S. Food and Drug Administration authorized a qualified health claim on canola oil’s ability to reduce the risk of heart disease when used in place of saturated fat, according to CanolaInfo, Winnipeg, Manitoba (phone 866-479-0853, www.canolainfo.org).

• Krill oil. Fosshaug et al. (2011) demonstrated the beneficial effects of krill oil supplementation on heart function in an experimental model of heart failure. Pre-treatment with Superba™ krill oil from Aker BioMarine, Oslo, Norway (phone +47-24-13-0000, www.akerbiomarine.com), attenuated left ventricular dilatation and hypertrophy after myocardial infarction (MI). Rats were randomized to pre-treatment with krill oil or control feed 14 days before induction of MI. The rats were examined with echocardiography at seven days post-MI, and those in the control group were further randomized to continued control feed or krill oil feed for seven weeks. The rats that were pretreated with krill oil showed significant attenuation of left ventricular dilatation, heart weight, and lung weight, as compared to those in the placebo group. Superba krill oil is a pure, natural source of eicosapentaenoic acid (EPA) and docosahexaenoic acid (DHA), and the naturally occurring antioxidant astaxanthin. The uniqueness is that the majority of the omega-3 fatty acids are provided in phospholipid form.

Plant Sterols
“Recent research continues to reinforce the role of sterols on significant lowering of LDL levels in the blood,” said Steve O’Brien, Product Manager, ADM Natural Health & Nutrition, Decatur, Ill. (phone 800-637-5843, www.adm.com). Casas-Agustench et al. (2012) showed that consumption of 2 g of plant sterols/day as part of either skimmed milk or semi-skimmed milk containing vegetable fat lowered LDL cholesterol in hypercholesterolemic subjects. “ADM has worked to achieve GRAS approval on CardioAid™ sterols from the FDA for use in 19 food categories in the United States, the widest array of product applications in the industry, including everything from cereals to soup to pasta,” said O’Brien. “Additionally, Canada has recently approved sterols like CardioAid for use in a variety of food applications such as margarines and dairy applications.” ADM recently launched CardioAid SWD, a water-dispersible sterol primarily designed for use in neutral-pH beverages.

• Olive extract. An olive extract, Hytolive®, from PL Thomas, Morristown, N.J. (phone 973-984-0900, www.plthomas.com), has a high concentration of natural hydroxytyrosol, a major phenolic compound found in olives that provides a great part of the health benefits of both olive fruit and virgin olive oil. A dosage of 100 mg of Hytolive powder contains the hydroxytyrosol equivalent to 10 table olives or 1/2 L of extra virgin olive oil. In 2011, the European Foods Safety Authority concluded that a cause-and-effect relationship had been established between the consumption of hydroxytyrosol and related compounds from olives and olive oil and protection of blood lipids from oxidative damage.

• Cocoa extract. Cocoa flavanols are a unique blend of phytonutrients found in the cocoa bean and are present in CocoaVia® cocoa extract supplement from Mars Botanical, Gaithersburg, Md. (www.cocovia.com, www.marsbotanical.com). Numerous studies have demonstrated that cocoa flavanols can help keep blood vessels healthy and support healthy circulation. Cocoa flavanols help maintain healthy levels of nitric oxide, and by doing this, work to maintain the flow of oxygen and nutrients. One of the many things that nitric oxide does is to trigger the relaxation of the vessel in response to changes in blood flow.

Proteins
Soy protein has been linked to providing benefits to cardiovascular health. Dairy proteins such as whey protein are garnering more attention with their effects on hypertension. He et al. (2011) indicated that both soy and milk protein intake reduced systolic blood pressure compared with a high-glycemic-index refined carbohydrate among patients with prehypertension and stage 1 hypertension. The randomized, double-blind crossover trial with three intervention phases included 352 adult subjects with prehypertension or stage 1 hypertension. The subjects were assigned to take 40 g of soy protein, milk protein, or carbohydrate (control) every day for eight weeks in a random order. Soy protein and milk protein supplementations were significantly associated with reductions in systolic BP. There was no significant difference in the BP reductions achieved between soy or milk protein supplementation.