As dedicated readers of this column may recall, micro-oxygen is shorthand for reducing the oxygen level in food and food environments to very low levels in order to prolong the biochemical, enzymatic, and microbiological life of the product. We have reserved the term nano oxygen to the next lower level, of diving into the deeper—nearerto-zero oxygen. As we asymptotically approach an ultimate of no molecular oxidation driver, we achieve the practical objective of more time during which the contained food product is safe and retains fresh-like quality.

Shelf Life
The incessant requirement of longer food shelf life is often responded to with the bizarre claim that six days or six weeks or six months is “sufficient” shelf life even though few data support any such supposition. Who needs three years of shelf life anyway? One answer: the military requirements for meals ready to eat (MREs) are three years. Five years of shelf life is absurd—unless we are readying for a space mission to the planet Mars, which we are. And so why do we struggle to add one day to the life of fresh red meat or seafood or days to the life of fresh-cut produce or weeks to our extended shelf-life dairy products and prepared meals or months to our aseptically processed and packaged or retort pouched sauces and soups? The answer is because shelf life, however titled or defined, is not a sharp delineation: the food is not safe and super at 6:30 p.m. one day and totally unacceptable the next day.

Therefore, if a food has been quantified with a six-month shelf life (usually defined as the acceptability by target consumers), at the end of three months, the product quality will be significantly higher than if the product were defined as having a three-month shelf life. The longer the shelf life, the closer the product is to fresh or freshly prepared quality during earlier times of distribution. And due to the nonlinear nature of food product deterioration, better here usually translates to “much better.”

Students of shelf life are cognizant of the multiple variables that contribute to the changes in food products as measured by time, but changes are really caused or accelerated by initial conditions, temperature, fluctuations in temperature, moisture, differential pressure, radiant energy, the biochemistry of the food itself, presence of carbon dioxide, ethylene, and, in our context, surely oxygen.

Oxygen in the Food Environment
Oxygen is present in several modes in food: it may be dissolved in the aqueous or lipid phase(s); it may be occluded in molecular form in voids or foams in the food; or it may be in bound form not available for reaction unless disturbed. Oxygen in package headspaces may be in equilibrium with oxygen in the food. Oxygen may enter the food product through permeation through the package structure walls or may be transmitted through mechanical voids such as pinholes in aluminum foil or folds in heat seals. The most important notion in this system is that the oxygen must be removed from the interior package environment prior to hermetically sealing the barrier package to prevent additional atmospheric oxygen from entering.

Without reviewing the principles of shelf life, shelf life testing, and shelf life prediction here, it should be noted that, basically, Arrhenius equations demonstrate that the rate of biochemical and enzymatic reactions in food approximately double with each 10˚C temperature increase. Reduction in oxygen, in whatever form, retards lipid, protein, color, flavor, and nutrient losses; think vitamins C or B-1, omega-3 fatty acids, etc. And microbiological lag phase periods and growth generally follow the same temperature dependency pathways. 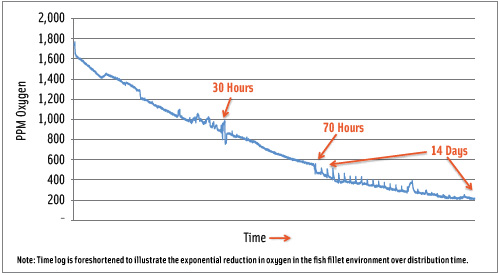 One of the simplest manifestations of the concept of extending shelf life through oxygen reduction is for salty snacks. Formerly packaged in an ambient air environment in moisture barrier plastic pouches, products such as potato chips experienced shelf lives measured in days or a few weeks. These limitations led to the necessity of delivery on an almost daily basis to retail channels, lest rapid lipid oxidation would mar the product flavor eating quality. By reducing the interior oxygen content to about 2%, and coupling this action with enhancing the package gas barrier through metalizing the oriented polypropylene, ambient temperature shelf life has been increased to 30 days. All other variables being equal, salty snack shelf life when the oxygen content is 1% is 60 days; when it is less than 1%, it is 90 days or more. The clear benefits are that fewer deliveries are needed to fill the distribution channels, longer and more efficient production runs are possible, and generally, product quality is better.

Beer
The ability of brewers to deliver “fresh” beer to discerning consumers depends on the initial beer quality, distribution conditions (especially temperature), and now, for many major brewers, the concentration of oxygen dissolved in the product and entering the product during distribution. Among the several reactions that beer suffers with oxygen are carbonyl and melanoidin formation, Strecker reaction, and aldol condensation to produce additional aldehydes, which may be direct or autoxidation. Minimization of these adverse sensory effects is achieved by distribution temperature control, and/or by reducing the oxygen down to parts per billion levels by liberally spraying with carbon dioxide throughout the processing and filling operations to eliminate and exclude atmospheric oxygen. And, of course, employing hermetically sealed packages such as aluminum can or glass bottles to attain shelf life of up to a year if the oxygen has been controlled is also a factor. The application of barrier plastic for beer packaging is possible largely due to the ability to reduce the oxygen to these low levels, but the shelf life is effectively limited to about three months due to gas permeation. Note the careful integration of product, process, and packaging employed to achieve the desired shelf life for this popular beverage.

Fruit Juices and Juice Drinks
Gradually and quietly over the past several years, most fruit-based drink packaging has been transitioning from glass bottles and two-piece aluminum cans into polyester bottles. Hot filling at temperatures below 100˚C has led to product oxygen concentrations in the 1,000 ppm range. Assistance is rendered by complementing the oxygen reduction by injection of liquid nitrogen that displaces headspace gas and also removes some of the dissolved and occluded gas in the product itself. The nitrogen not only reduces the oxygen but also functions as a pressurizing gas to maintain the physical structure of the package and so assist in distribution—another striking example of combination/hurdle technologies holistically reaching for very long shelf life, in this instance, at ambient temperatures. Research at the University of Georgia Dept. of Food Science and Technology has built these micro-oxygen technologies for prolonging quality retention (i.e., shelf life), of high acid fluids such as juices and sauces ([email protected]).

Fresh Seafood
The most recent example of holistic hurdle technologies’ innovations illustrate the imperative of close marriage of multiple temperature/oxygen control throughout the processing/distribution system to achieve what has been described as phenomenal results. Global Fresh Foods (GFF) (www.globalfreshfoods.com) has successfully shipped by sea salmon and tilapia fillets from offshore locations to U.S. ports, bypassing expensive and microbiologically hazardous air freight.

GFF’s is a total system of product, process, packaging, and distribution; it is the result of several years of research and development. Described relatively simplistically as controlled atmosphere, basically GFF’s SAF-D™ system has an input of fresh fillets of seafood, which is encased in corrugated fiberboard cases lined with polyethylene film. During this fast-moving period, temperature is rapidly reduced to less than 3˚C and often to less than -1˚C. Cases are palletized and enclosed in a large barrier plastic film shroud. The entire pallet load is subjected to gas exchange to displace oxygen with carbon dioxide subsequent to which the film bag is hermetically sealed. Within the pallet load is a device that electrochemically reacts with residual oxygen, bringing the concentration down to 200 or so ppm. Contributing to this total change in internal environment is the action of the inherent microorganisms, which consume more oxygen down to 100 ppm or even lower, while increasing the carbon dioxide.

Pallets are loaded into refrigerated, temperature-controlled shipboard containers for seagoing distribution to American ports. Temperature control is, of course, essential to ensure that the temperature does not rise above 3.6˚C, the minimum for growth of anaerobic pathogenic Clostridium botulinum type E, or below -2˚C to avoid freezing. Temperature must be maintained in the near freezing range to maximize the dissolution of carbon dioxide, the major antimicrobial agent in the mix. Oxygen reduction is intended to control lipid, protein, and color change, and to help control aerobic microbiological growth. Reported shelf life of the seafood fillets has been in excess of 35–40 days under these controlled conditions plus another 11–14 days under good temperature control after removal from the controlled atmosphere conditions, for a total of nearly 50 days, which is a remarkable achievement.

That these holistic technologies of controlled atmosphere incorporating microoxygen have been found highly effective for seafood (which is among the most vulnerable of all foods to microbiological spoilage and enzymatic and biochemical deterioration) should trigger the question: If it works for fish, why not red meat, poultry, prepared foods, and even produce? Why not indeed, for these basic technologies date back more than a half century, while the control components are comparatively modern. And again, we highlight the two contemporary principles of food and food packaging science and technology: often a gestation period that is too long elapses after conceptualization/laboratory demonstration. The reason: a paucity of comprehension of the concept and integration of all elements into a holistic entity that is the true path to meaningful application.