With the passing of the Food Safety Modernization Act (FSMA), the U.S. Food and Drug Administration’s approach to food safety has shifted from contamination response to contamination prevention. The FSMA now requires food facilities to evaluate their operations to determine weaknesses in their food safety program, to implement measures to prevent contamination, and to have a corrective action plan in place in the event contamination occurs. One of the main focuses has been the establishment of a more thorough environmental monitoring and sampling program. A successful environmental monitoring program defines hot spots within the facility and determines if the cleaning and sanitizing procedures are working effectively. Increased and more thorough sampling will inevitably lead to increased positives for contamination, especially in the hard-to-reach, hard-to-clean areas. When that occurs, what is the next step? 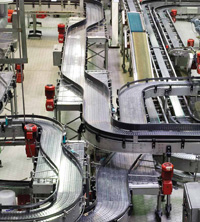 These new rules, along with the better sampling methodology, need to be met with better, more thorough cleaning practices within food facilities. In addition to normal cleaning procedures, many facilities are now looking to add antimicrobial fumigation to their arsenal of contamination prevention and contamination remediation systems. Gaseous fumigants are able to evenly fill the space they are introduced into, contacting the hard-to-reach surfaces that were previously difficult to clean.

Improving Environmental Monitoring
Controlling food pathogens (such as salmonella, E. coli, Listeria monocytogenes) continues to be a challenge for the food industry and is a major threat to human health. Every year, food pathogens cause approximately 48 million illnesses and over 3,000 deaths (Scallan et al., 2011). In addition to the immediate effect that food pathogens have on consumers, there are long-lasting effects on brand reputation, loss of revenue and customers, legal fees, increased insurance premiums, and costly product recalls. This makes it even more important to find contaminations before they become widespread problems causing illness and product recall.

Improving the environmental monitoring program starts by widening the sampling locations to determine sources and harbors of contamination. This includes testing the hard-to-reach areas that might not be easily accessible and might require the disassembly of some equipment and components in order to properly sample and survey them. Professional advice can be sought from consultants and testing laboratories to review and strengthen an environmental monitoring and sampling program. (See Figure 1 for a list of common areas for pathogen sampling.)

It is also important to examine the equipment within the facility. Old equipment, furnishings, and fixtures might need to be upgraded or replaced as more sanitary designs that are less susceptible to harboring contamination and/or easier to clean become available. An example might be moving away from fabric conveyor belts toward plastic or stainless steel because they can be cleaned more easily.

While the goal in a food facility is to always be pathogen-free, it is very likely that at some point a sample will come up positive from somewhere in the facility. In some circumstances, normal cleaning procedures can be sufficient in eliminating the contamination. Some areas are too difficult to clean properly using normal methods such as spraying and wiping, either due to accessibility, material incompatibility, or difficulty in the cleaning agent reaching the contamination. If the contamination is in a hard-to-clean area, or is a persistent contamination, a more thorough cleaning process is necessary. If a contamination exists deep within a spiral freezer or conveyor, it can be hard for a liquid or fog to distribute throughout and reach the pathogen well enough to eliminate it.

Pathogens harbored within unsealed concrete and cement are harder to eliminate because the material acts as a sink, absorbing the cleaning agent being used. To overcome the absorption when decontaminating unsealed concrete and cement surfaces, a higher concentration or longer resident time must be used such that the pathogen is eliminated. Depending on the decontamination method used, it could be difficult to ensure that the proper contact time was accrued at a sufficient concentration.

In order to achieve antimicrobial kill, the method used must be able to contact the organism at the proper concentration for a sufficient length of time. For most food facilities, the standard cleaning method is spraying and wiping a liquid sanitizer/disinfectant/sterilant around to coat all surfaces. With this method, it is difficult to guarantee that all surfaces are contacted sufficiently enough to eliminate whatever pathogens or organisms exist there. Dilution, evaporation, condensation/dripping, or chemical breakdown can cause a method to either lose concentration or not reach the full contact time. In either case, an organism could be able to survive the cleaning, leaving a facility exposed to potential contamination. An example of a difficult component to spray and wipe using a liquid agent is a spiral freezer. It becomes very difficult for a liquid to reach all surfaces of a spiral freezer evenly for a sufficient length of time due to the tight openings and inaccessibility. When the standard cleaning method is shown to be insufficient for a location or application, a better decontamination method must be found. As such, it is important to examine the different high-level decontamination methods to determine what will fit a particular facility’s needs. 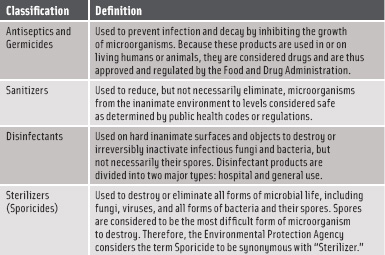 The U.S. Environmental Protection Agency (EPA) regulates the sale and use of antimicrobial pesticides and classifies them in terms of the level of kill they can achieve. There are four classifications, ranging from antiseptics to sterilizers. (See Figure 2 for an explanation of the classifications.) A sterilizer is defined as being “used to destroy or eliminate all forms of microbial life, including fungi, viruses, and all forms of bacteria and their spores” (EPA, 2011).

There are various high-level fog, vapor, and gaseous fumigation methods that are available and in use in food facilities today. High-level vapor and fog methods spray a high-level liquid sterilant throughout a facility in a line-of-sight manner, attempting to coat all surfaces with a layer of condensate. Some of the liquids used for vapor and fog fumigation are bleach, liquid chlorine dioxide, hydrogen peroxide, peracetic acid, and various blended liquids. All these methods share the same physical traits and limitations, as they tend to be limited in their distribution. Fog droplets are affected by gravity, limiting their ability to travel far distances before landing on surfaces. Vapor distribution is limited due to the predisposition of the vapor to condense back into a liquid before reaching all surfaces. These condensed vapor droplets are then affected by gravity just like fogs, and have difficulty reaching all surfaces within a space. Equipment and fixtures can act as barriers, blocking the vapor from traveling behind them and casting a shadow area of limited contact and limited kill. Considering the same spiral freezer as before, it would be very difficult for a vapor to be injected at one location and reach all surfaces of the conveyor and the enclosure.

Liquid chlorine dioxides can be somewhat harsh on materials and leave a residue due to acidic byproducts of the generation method. Bleach is similarly harsh on materials and must be rinsed off afterward. Peracetic acid can be corrosive as well, as the “acid” in its name will admit. Vapor Phase Hydrogen Peroxide has been shown to have difficulty penetrating gaps of 5 mm (0.19 in) or less (Steris, 2000), which would prevent it from reaching organisms harbored in scratches, cracks, and other crevices within the facility. This is much the same for all vapor and fog methods, as the droplet size is larger than the organisms targeted, meaning there can be locations where organisms exist that vapor/fogs cannot reach.

Gaseous methods fumigate by introducing a gas into the facility, allowing the gas to fill the space according to natural gas laws, which state that a gas will inherently fill the volume that it is contained in. Some gases used for antimicrobial fumigation are methyl bromide, ethylene oxide, formaldehyde, ozone, and chlorine dioxide gas. These gases all share the ability to distribute readily throughout a space, but there are distinguishing traits that make some unsuitable  or fumigation within a food facility. Methyl bromide, for instance, is recognized as an ozone-depleting substance (EPA, 1993), and as such is banned from most uses. Ethylene oxide is a carcinogen and is explosive at use concentrations (NIOSH and CDC, 1994) and needs to be used within special chambers using damage-limiting construction. Formaldehyde is a known carcinogen (IARC, 2004) and also leaves a dangerous residue (Luftman, 2005); both of these factors make it ill-suited for use in a food facility. Ozone has been shown to have limited efficacy against a variety of organisms (Beswick, 2011) and has a lifespan (20–30 min), much shorter than its contact time (multiple hours). Chlorine dioxide gas, however, is noncarcinogenic, non-residue-forming, and highly effective against pathogens and microorganisms (Jeng, 1990, Han, 2000). For this reason, chlorine dioxide gas is being used for antimicrobial fumigation within the pharmaceutical, life science, defense, healthcare, and food industries for a wide range of applications, including whole facility decontamination (Czarneski, 2009; Luftman, 2006; Mattson, 2011). Using the same spiral freezer example from before, chlorine dioxide gas would be able to completely fill the enclosure, distributing into the tight spaces and achieving an even level of decontamination throughout.

Gaseous fumigation methods such as chlorine dioxide gas hold a distinct advantage toward achieving high-level decontamination in hard-to-reach areas. Tall areas such as warehouses, silos, and processing tank rooms prove too difficult for vapors and fogs to reach the upper surfaces as gravity affects the vapor droplets and prevents them from reaching such heights. True gases are able to reach high surfaces with no drop in concentration, offering the same level of decontamination from floor to ceiling. Gases can also penetrate into long enclosures such as conveyor systems, which would hinder liquid/vapor distribution and not allow it to migrate all the way through.

In the event that a widespread contamination does occur at a facility, gaseous decontamination would prove the most effective method toward eliminating the problem. It would prove impossible to spray and wipe an entire facility, and vapors would not be able to contact all surfaces either. By filling the facility uniformly with a gaseous sterilant such as chlorine dioxide gas, which has been proven to eliminate all viruses, bacteria, molds, and spores, it can be guaranteed that microbial contamination is eliminated from all surfaces in a facility, including cracks and crevices. A whole facility decontamination can take place in as little as one day, depending on the size and timeframe necessary.

Decontamination Options
Microbial contamination continues to be a difficult challenge for the industry, but improved sampling and decontamination techniques can help mitigate the potential of a broad contamination affecting products and consumers. Employing an in-depth sampling survey of a food facility can note the problem areas where contaminations originate and are harbored. Testing the facilities’ standard cleaning methods by using microbial test strips or biological indicators can highlight the efficacy of the sanitation program.

Examining the results of such a test can allow for decisions to be made regarding the need forhigher-level decontamination methods such as the gaseous fumigation of a sterilant like chlorine dioxide gas. Chlorine dioxide gas also offers the quickest method to eliminate a widespread contamination within a facility, eliminating all pathogens and microbes on surfaces from floor to ceiling, including cracks and crevices. With the FSMA changing the FDA’s food safety approach from contamination response to contamination prevention, employing better sampling and routine decontamination techniques is essential in protecting both food facilities and consumers alike.