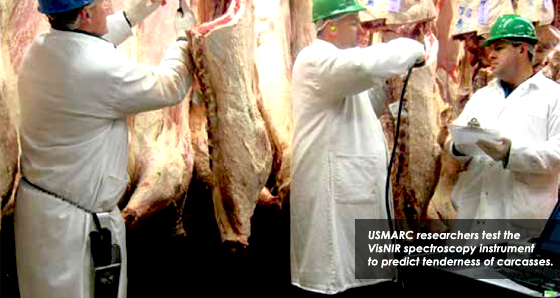 Approximately 34 million cattle and 111 million hogs were slaughtered for food use in the United States in 2011, according to the most recent report from the National Agricultural Statistics Service of the U.S. Dept. of Agriculture (USDA). The carcasses are inspected to ensure that they are from healthy animals and have been handled in a safe and sanitary manner. Chilled beef carcasses from cattle that have been grain-fed are graded according to quality and yield. Meat has been graded for more than 80 years, most of that time by manual evaluation but more recently aided by visual imaging systems, and much research has been conducted to develop instruments to grade both the yield and the quality of meat online in the processing plant.

Beef Carcass Grading
On a voluntary, fee-forservice basis, meat processors can have their products officially graded or certified by the USDA’s Agricultural Marketing Service (AMS) (www.ams.usda.gov). During the grading of beef, the chilled carcass side is cut between the 12th and 13th ribs to expose the rib eye and associated fat cover. Historically, grading was done on beef carcasses by a human grader trained in processing plants, but that led to day-to-day and week-to-week variation in the accuracy of grading. So researchers at the USDA’s Roman L. Hruska U.S. Meat Animal Research Center (USMARC) (www.marc.usda.gov) in Clay Center, Neb., worked on the problem and developed an instrument that almost all major North American beef plants use for measuring marbling and yield grade traits.

• Yield Grade. The yield grade, an estimate of the amount of usable lean meat on the carcass, is based on an assessment of the weight, fatness, and muscling. Tommy Wheeler, Research Leader for the Meat Safety & Quality Research Unit at USMARC, and coworkers Steven Shackelford, Andy King, and Mohammad Koohmaraie developed an instrument based on image analysis. Manufactured by E+V Technology (www.eplusv.com), the handheld instrument has a camera inside a stainless-steel housing that is placed over the rib eye. The instrument, the VBG2000, has been approved by USDA’s AMS and has been used virtually industry-wide for yield and quality grading for about two years now, Wheeler said. Some companies use it for in-house grading, and others use it for the official USDA grading.

The instrument takes a picture, evaluates proportions of lean and fat, and identifies the rib eye. A prediction model then uses the same four factors that go into the official USDA yield grade equation—carcass weight, rib-eye area, fat thickness on the outside of the rib eye, and the estimated percentage of kidney, pelvic, and heart fat—to arrive at the yield grade.

For young steer and heifer carcasses, there are four potential USDA quality grades: USDA Prime, the highest quality, has the highest amount of marbling. USDA Choice, the most common grade sold at retail and in restaurants, has less marbling than USDA Prime. USDA Select has less marbling than USDA Choice and is sold at a discount relative to the higher grades, based on lower expected tenderness and flavor. USDA Standard has the least marbling and is frequently sold as ungraded. The VBG2000 grading instrument also assesses the degree of marbling in the rib eye to develop the quality grade for expected tenderness, juiciness, and flavor. A human grader combines the marbling score from the instrument with an estimate of an animal’s age to arrive at the final quality grade.

USMARC researchers have validated several improvements to the VBG2000 system in the last year to make it even more accurate and consistent, Wheeler said. To be accurate, the instrument must be placed properly over the 12th-rib cross-section of the rib eye and the cut between the 12th and 13th ribs must be smooth and straight. To account for errors in either of these, the researchers added a laser measurement of the distance from camera to rib eye just before snapping the picture, and the instrument makes any necessary adjustments. A second improvement was to switch the light source for the flash to a light-emitting diode (LED), which gives a more-consistent light than the original light source and, consequently, a moreaccurate prediction across different instruments. The VBG2000 gained widespread implementation after it was demonstrated that the image analysis system can assess USDA yield grades and marbling scores more precisely and accurately than could be achieved by USDA graders, Wheeler said.

Predicting Tenderness
The USMARC also has been working for the past decade or so to develop a noninvasive, fast, and accurate online instrument that can be used to predict the tenderness of carcasses in the packing plant. Being able to select carcasses according to tenderness would be useful in beef merchandising. The researchers have been working with visible and near-infrared reflectance (VisNIR) spectroscopy as a way to predict tenderness. This technology shines a light on the rib eye and then captures the reflected light. Differences in reflectance at certain wavelengths of light are associated with different characteristics of the meat, such as tenderness. A computer model generates a prediction of the slice shear force of a cooked steak, an indicator of tenderness. The measurement takes only 1–2 seconds. The system has been shown to be capable of identifying a group of carcasses or cuts that will be more tender and could be marketed as such.

The researchers used USDA Select beef in their initial work because although that grade of beef is discounted relative to USDA Choice, many USDA Select carcasses are tender and could be marketed accordingly. The technology has been shown to work as well on USDA Choice beef and pork loins. One company, Nolan Ryan’s All-Natural Beef (www.nolanryanbeef.com), uses the instrument to guarantee the tenderness of its Nolan Ryan’s Guaranteed Tender All Natural Beef line.