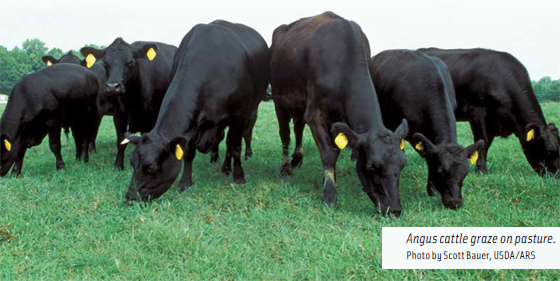 In the time since the publication of the IFT Expert Report [a report titled “Antimicrobial Resistance: Implications for the Food System” was published in 2006], governmental and inter-governmental efforts to address the issue of antimicrobial resistance have seen much progress. In particular, concerns about the public-health implications of microbial resistance to antibiotics used in both human medicine and food-animal agriculture have led to the publication of the World Health Organization’s (WHO) List of Critically Important Antimicrobials for Human Medicine (see Table) and the World Organisation for Animal Health’s List of Antimicrobials of Veterinary Importance.

Global Monitoring Programs
Other efforts to address threats posed by antimicrobial resistance include monitoring programs for antimicrobial-resistant microbes that integrate human, animal, and food sampling schemes. These programs, in various stages of development and implementation worldwide, have been useful in identifying trends in development and persistence of antimicrobial resistance among select foodborne pathogens and related microbes. Two of the most mature such systems, the National Antimicrobial Resistance Monitoring System (NARMS) in the United States and the Danish Integrated Antimicrobial Resistance Monitoringand Research Program (DANMAP) in Denmark, were discussed in the 2006 IFT Expert Report. NARMS, a jointprogram administered by the FDA, Centers for Disease Control and Prevention (CDC), and U.S. Dept. of Agriculture has, during a roughly 14-year period, monitored trends in antimicrobial resistance among foodborne pathogens such as Salmonella and Campylobacter jejuni that are largely of animal origin. 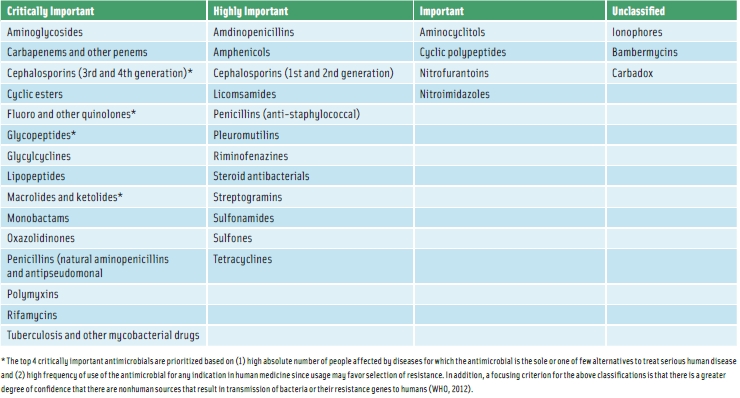 This update discusses developments in the NARMS program since publication of the parent IFT report in 2006. In addition, general observations from NARMS data are presented, including the lack of resistance expansion to some of the WHO critically important antibiotics, such as fluoroquinolone and quinolone resistance among non-Typhi Salmonella serovars; an increase in fluoroquinolone-resistance among C. jejuni followed by a sustained level (neither increase nor decrease) after fluoroquinolone use was banned for poultry; very low levels of C. jejuni resistance to macrolides; and markedly increasing resistance among Salmonella to third-generation cephalosporins. Many multidrug resistance (MDR) phenotypes (with or without ceftiofur resistance) among Salmonella are serovar-dependent, with the most prevalent being S.Newport and S. Typhimurium in cattle, and S. Heidelberg and S. Kentucky in poultry.

MRSA
Also of note since the publication of the Expert Report in 2006 is substantial interest and questions surrounding the emerging resistant pathogen methicillinresistant Staphylococcus aureus (MRSA). The increasing incidence of community-and occupational-based infections due to MRSA continues to vex public-health practitioners. In recent years, questions have been raised about the potential for foodborne transmission of this pathogen and the role of agricultural antimicrobial use in its emergence. This update discusses pertinent issues and research related to this topic and concludes that, at present, there is little empirical evidence to support its direct relevance to food safety or to infer that antibiotic use in agriculture has played a primary role in its emergence and evolution.

In addition to methicillin resistance in S. aureus, increases have been observed in bacterial resistances to multiple antimicrobials since 2006. These increases in co-resistance, that is tolerance to therapeutic concentrations of more than one antibiotic, complicate the challenge of treating drug-resistant bacteria by potentially delaying the selection and application of the most efficacious antibiotics which may result in adverse public-health outcomes. Co-resistance can be conferred by accumulation and genetic linkage of multiple gene cassettes such as that observed on the IncA/C plasmid of Enterobacteriaceae. Acquisition of the IncA/C plasmid is of most concern because of the plasmid’s ability to acquire large numbers and varieties of determinants conferring drug resistance. This plasmid seems to have a broad host range that enables it to circulate among a variety of bacterial hosts, both commensals and pathogens. One such example of IncA/C plasmid acquisition is by Salmonella Newport MDR-AmpC. This serovar is a highly virulent pathogen of special concern because it is not only resistant to ceftriaxone that is the drug of choice for treating salmonellosis in children but is also co-resistant to many alternative drugs.

Co-selection and Co-resistance
In addition to antimicrobials, many non-antimicrobial factors such as metals and disinfectants can co-select for antimicrobial resistance in bacteria. Indeed, the use of heavy metals as replacements for antimicrobial growth promotants in Europe, such as elevated levels of feed-grade zinc and copper, have been implicated in helping to expand and sustain MRSA and macrolide- and vancomycin-resistant Enterococcus spp., respectively. Pertinent issues surrounding co-resistance and co-selection as well as the implications of these issues for the development of effective interventions are discussed in detail in this report.

Some antimicrobial-resistant bacteria are clearly a foodborne threat (for example, Salmonella Typhimurium DT104), whereas others are less likely to be a foodborne hazard (livestock-associated MRSA). Likewise, the role that agricultural antimicrobial selection pressures have played in promoting the emergence and persistence of such strains is perhaps more clear for the former than the latter. Regardless, the issue of co-selection by other contributing factors, including metals and disinfectants, and the serovar-dependence of resistance traits among the Salmonella create considerable uncertainty of the magnitude of risk posed by animal and aquaculture uses of these products.

Intervention Approaches
Perhaps because of the complexity and uncertainty associated with co-resistance and co-selection, there is little consensus on what constitutes an effective intervention to mitigate the occurrence of resistance among microorganisms, especially those of publichealth relevance. One approach is to reduce or prohibit the use of antimicrobials in agricultural animals. This strategy has been successful for specific “drug-bug-use” combinations, such as when broiler producers in Quebec ceased the in ovo administration of ceftiofur. This intervention appears to have contributed to meaningful reductions in the occurrence of ceftiofur-resistant S.Heidelberg and Escherichia coli on poultry products and in the percentage of ceftiofurresistant S. Heidelberg in human clinical patients.

However, in other situations, more complex interventions appear to be required. Studies evaluating the Danish experience, wherein non-therapeutic uses of antimicrobials were excluded from livestock production in Denmark, have shown minimal evidence to date suggesting that this intervention has provided substantially greater public-health protection in the form of a reduced disease burden of morbidity and mortality in the human population. Furthermore, the Danish experience illustrates that simple interventions are, in some cases, insufficient to impact resistance levels and associated health outcomes and, further, that metrics of success may be difficult to measure, particularly if they are not proximate in terms of time or space to the intervention.

Imported Foods
While domestic control over antimicrobial usage policy and monitoring is achievable, little actionable risk management information is available for imported foods. Because of the recognized global concern of antimicrobial resistance in the food supply and the potential for these resistant organisms to be moved around the globe in foods, the Codex Alimentarius Commission (CODEX) established an ad hoc Intergovernmental Task Force on Antimicrobial Resistance in 2007. The Task Force had the mandate to provide guidelines for a structured risk analysis framework to address human health risks associated with the presence of antimicrobial-resistant microorganisms in food and animal feed, including aquaculture, and the transmission through food and animal feed of antimicrobial-resistant microorganisms or determinants linked to the nonhuman use of antimicrobial agents. Through this venue, national and regional food safety authorities may soon have increased ability to assess and control risks posed by antimicrobial resistance in imported foods.

Saliently, the prevalence and diversity of resistance to different antimicrobials can vary greatly among countries and regions, and this might be due to substantive differences in antimicrobial usage practices. While we must focus on ensuring that antimicrobial use within the U.S. is prudent and also continue to discover and evaluate alternatives to antimicrobial use, we also must recognize that food production is internationally interdependent.

It is highly likely that actions will be taken during the next five years to further restrict the availability of critically important antimicrobials and their allowed uses in aquaculture and agriculture, particularly in the developed world. However, such practices may in the near future have trade implications which will apply pressures to those jurisdictions with less control on their antimicrobial practices to develop and implement appropriate risk management policies. To effectively mitigate harmful effects from antimicrobial resistance in the U.S., we must work with global partners to promote prudent use in those countries where regulatory oversight of critically important antimicrobial drugs is underdeveloped.