What consumers see as “natural” is something that has been evolving over the past several years. Their notions of healthy and wholesome have changed somewhat, and this has impacted what they think about natural. What we are seeing in the marketplace is growth in food and beverage products that provide a range of natural benefits, especially those that focus on the inherent goodness of what is in products.

Some consumers have become more concerned about their food supply and what is in it. It is probably an overstatement to say that consumers are afraid of their food, but they are concerned, especially given food scares and bad press in the recent past. For example, a growing number of pet owners are preparing homemade food for their animals, partly in an attempt to ensure the safety of the food they feed their four-legged family members. In addition, Mintel’s research indicates that about two-thirds of consumers are concerned about the safety of the meat and poultry products they buy.

Therefore, consumers are looking for shortcuts to help them understand if a product is wholesome or trustworthy. Although many consumers are skeptical of the term natural on a label, they nevertheless look for it and find value in it. For example, about two-thirds of consumers believe “when I see products labeled as ‘all natural,’ I think it’s healthy.” While this statement may or may not accurately reflect a product’s actual benefits, what is important is that consumers believe that “natural” and “healthy” are largely linked.

Label Claims
Food companies in the United States appear to be responding. According to Mintel’s Global New Products Database of products that bear specific types of claims, the All-Natural claim is one of the most prevalent claims, now appearing on about 12% of all food and beverage product introductions. While this claim incidence may seem a little low, it should be noted that it is about the same as No Additives/Preservatives, and substantially higher than Vitamin/Mineral Fortified, Organic, and Added Fiber (See Table). 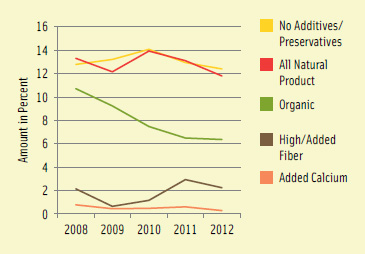 The percent of products bearing the All-Natural claim has dropped some in the past two years, which is a trend that has been echoed in many better-for-you claims, including No Additives/Preservatives and Vitamin/Mineral Fortified. This overall drop in claims could be related to companies moving a bit more toward simply talking about what is in a product rather than making claims regarding the product itself.

In addition, we have seen most “low-in” claims show declines. These are the claims that promote fewer calories, less fat and sodium, and the like. The exception is for claims that address gluten, lactose, and allergens. All of these claims in the U.S. market have shown increases over time, especially Gluten Free. That claim alone now appears on almost 10% of product introductions in the U.S.

The difference in claims is especially apparent when comparing Europe to the U.S. market. For example, in Europe, the percent of products that bear an All-Natural claim is only about 2%. The percentage has remained relatively steady over the past five years of new product introductions, despite new labeling regulations now in effect in the EU. This seems to indicate that the European market is one that has never embraced that All-Natural positioning. The No Additives/Preservatives claim is somewhat higher in Europe than it is in the U.S. market—about 15% of products in Europe bear that claim, compared to about 12% in the U.S. And while Organic claims in the U.S. have been declining, currently appearing on just more than 6% of products, in Europe, organics have been increasing, now accounting for nearly 10% of product introductions.

Another claim that is tangentially related to the natural positioning is Vegetarian. Products with a vegetarian positioning can easily be seen by consumers as being somehow “better,” or full of good things. In the U.S. market, the number of products that have a vegetarian positioning is relatively low—only about 1.3% of all products. This percentage has remained relatively steady over time. In Europe, by comparison, the percent of products with the same claim is almost 9%, up from 6% five years ago. Clearly, in Europe, this claim is of greater importance to consumers, which could be driven in part by religious reasons, but more likely due to ethical ones.

Regardless of the specific claims, we see a wide variety of products on the market around the world that focus on the idea of “natural goodness.” For example, Heinz offers in Europe and the U.S. its First Harvest Tomato Ketchup, which comes from the first harvest of tomatoes every year. The bottles are numbered, signed, and dated, and a relatively small amount is produced annually. Once the supply is gone, there are no more First Harvest ketchup bottles available until the next crop year. This positioning tells consumers very clearly of the naturalness and “purity” of the product.

In the U.K. market, sweetener giant Tate & Lyle offers its Light at Heart table sweetener, which is a blend of stevia and either white sugar or brown sugar. The use of stevia enables the company to offer consumers a sweetener product that can be used in baking or other uses that has half the calories of sugar, but still can send a natural message. In fact, the product is labeled as containing all-natural ingredients.

Sometimes, the natural message is conveyed in ways that go beyond the ingredients. Last year, Kraft introduced Milk Bite milk and granola bars, which are claimed to have the calcium of an 8-oz glass of milk. The formulation tells the natural story very well, but the shelf presence is something quite unique—these snack bars are sold in the refrigerated case, near other Kraft products. Being sold refrigerated says “natural” in a very strong way, especially since we have not seen that in a bar product in the past.

Companies also talk about natural goodness by focusing on the inherently good-for-you ingredients inside. As a result, we see quite a few products on the market that talk about the inclusion of fruits, vegetables, and/or grains. In the U.S. market, for example, Campbell Soup positions its V8 V-Fusion Sparkling drink as a better-for-you and natural alternative to soft drinks. The sparkling fruit & vegetable drinks are made with 50% juice, yet still offer refreshment via its sparkling or bubbly characteristics. In the U.S. and broadly throughout Europe, Kraft offers BelVita Breakfast Biscuits, which position themselves as being a good source of whole grains and a natural source of B vitamins. The biscuits are intended as a unique and satisfying morning meal.

The Power of Pure
Another way that products convey a sense of inherent goodness is via the word “pure.” The word alone sends a very strong message about the wholesomeness of a product. While we often see the Pure descriptor or branding on gum and mint products, it appears on other products as well. For example, Perfetti’s Mentos gum and Kraft’s Dentyne gum both come in varieties that are called Pure, and both are intended to freshen breath. But, moving beyond gum, Dannon in the U.S. market has taken a fascinating and novel approach. The company offers a Pure yogurt, which is made with seven to nine ingredients, depending on the flavor. Quite often, products that focus on the simplicity of ingredients have a premium price tag attached. But for Dannon Pure, it is exactly the opposite. The company positions Pure as an affordable choice for the family, and it is priced lower than other products in its yogurt line. It is sold in a multi-serve 32-oz tub and also in single-serve multipacks.

In Germany, Danone (Dannon’s parent company) takes a more premium approach. Its Activia Pur yogurt contains “three ingredients, nothing else.” Those ingredients, as listed on the package, are yogurt, fruit, and raw cane sugar. This yogurt is priced at about a 20% premium compared to other Activia yogurts.

Natural Progressions
What do we see in the future? Companies that wish to address the idea of natural in their products should give some thought to how we have seen other creative companies do that in the past. The strongest message, and thus likely the most successful message, is that of promoting what is inherently good in the products consumers buy. This may be about specific types of ingredients (e.g., whole grain) or products that provide specific types of benefits (e.g., vitamins, minerals, fiber, protein). And for companies that are not able to create products with clean, simple ingredient statements, consider educating consumers as to why some of those foreign-sounding ingredients are in your product.

While the term “natural” is often under fire, consumers are nevertheless still looking for the benefit. Companies can find myriad ways to deliver that benefit.