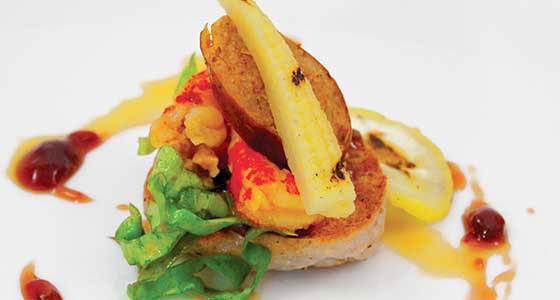 Kikkoman introduced a Chili Ponzu and a citrus-flavored soy sauce; its new Clear Soy Sauce PK-56 will be useful in applications that are light in color. Kikkoman’s Asian-Style Soup Broth made with Dehydrated Natural Flavor Enhancer-Powder with Yeast Extract helps boost umami taste and reduces sodium by up to 30%.

Watch for growing interest in pineapple and tropical flavors. Pineapple juice is among the fastest-growing juice flavors in restaurants; it was the fourth-most-ordered juice in 2013, according to Datassential. Florida Products showcased its aseptic, frozen, and organic pineapple puree and juice at the Food Expo.

Gray & Co. (CherryMan) offered “Made in the USA” maraschino cherries with all-natural colors and flavors. Milne featured a 100% all-natural Concord Grape Puree rich in vitamins C and K and polyphenols.

Texture and aroma were other important trends moving further into the spotlight. Bunge’s new  Homai Rice Panko Bread Crumbs, billed as “a versatile addition to any recipe or formulation that calls for bread crumbs,” don’t contain gluten, soy, or milk.

Snacks, Beverages, and Bars
With snacks representing 54% of all U.S. meal occasions, it’s not surprising that “snack-able” and healthy beverages, confections, and bars remained center stage at the Food Expo. Protein continued as a strong trend, and beverages were no exception. Virginia Dare featured a Protein-Fortified Peach Ginger Drink and a Protein-Fortified Iced Coffee Choco-latte Beverage.

With Packaged Facts predicting that the kid-specific food/beverage market will reach $32 billion by 2018, Watson’s Child-Friendly Snack Bar premix that provides 50 mg of choline, 15% of the Daily Value for vitamins A, B-1, B-2, B-3, B-6, B-12, C, D, and E and 10% Daily Value of calcium for kids is right on target. Watson also featured a healthy fortified breakfast trail mix.

The American Egg Board not only touted eggs’ high protein levels but their ability to keep both a clean and a gluten-free label.

Functional Favorites
According to Innova Market Insights, 55% of all the new foods/beverages launched in Australasia in 2013 had a health positioning. The figure was 49% in the United States and Latin America, 40% in Western Europe, 38% in Eastern Europe and the Middle East, and 32% in Africa.

Most important, despite the tighter regulatory control of health claims, especially in the European Union (EU), the global use of “active” health claims—in which specific benefits are promoted or the addition of an ingredient touted—increased 9.3%, according to Innova Market Insights. Passive health claims (e.g., low-fat) were up 35%, per Innova (Figure 2).

While antioxidants were prominently featured on the exhibit floor, it was choline, magnesium, and potassium that stole the show, not surprisingly, with key labeling changes looming. Docosahexaenoic acid (DHA) and eicosapentaenoic acid (EPA) boosters were a new concept featured at the DSM booth.

Protein remained in the spotlight, with a bevy of new sources and the ability to incorporate very high levels into everyday foods/beverages being showcased. Roquette America featured a Vegetarian Quesadillas Filling with Texturized Pea Protein.

The U.S. Dairy Export Council (USDEC) presented a Lentil Power Soup, formulated with milk protein concentrate and a concentrated casein ingredient, to provide 20 g of protein (40% Daily Value) and 35% of the Daily Value for calcium.

For the first time this year, the $30.7 billion sports nutrition/weight loss category had a significant presence on the Food Expo floor. For example, USDEC’s Veggie Burst beverage that blends vegetables and whey protein was positioned to deliver post-exercise recovery.

Livzon, a Chinese company, showcased its amino acid lineup in sports applications. Awareness of amino acids reach 53% in 2013, per Gallup. Watson’s B-complex premix for use in soft chews or gummy candies also focused on sports recovery.

Clever solutions to the difficulties of going gluten-free continued to be of major interest. Watson’s gluten-free decadent brownies were not only gluten-free, but certified free of the top seven allergens. The specialty mix requires only oil and water, which eliminates the worry of having to source individual certified ingredients.

Wright Enrichment’s Energy Chew featured its Supercoat natural caffeine, which has the equivalent of one cup of coffee’s caffeine in two chews, along with vitamin B-12.

According to Mintel’s “Fighting Fatigue with Energy Claims” presentation, there is a high-potential opportunity as consumers’ interest moves to longer-term, sustained energy, and slow energy release. Mintel reported that sustained energy was particularly important for weight management. Peak Energy’s D-Ribose is supported by clinical studies to provide a rejuvenating boost of energy that lasts for hours.

Glycemic health and control, beyond the glycemic index, was another important new health benefit getting well-deserved attention. PLT Health Solutions offers Benecarb® Glycemix Balance Complex, which is high in antioxidants, minerals, and polyphenols. Clinical studies have documented its ability to reduce the glycemic index of food by up to 20%.

A final note of interest is the fact that for the first time, ingredient and drink claims of “made in the U.S.A” made their way onto the Food Expo floor as did taglines touting the origin of ingredients.