Edible Films
Historic examples of edible films include sausage casings, seaweed (nori) for wrapping sushi, and rice paper for wrapping sticky candies. During the past 50 years, newer polysaccharide, protein, and lipid ingredients have been used to manufacture edible films for a wide variety of uses.

All ingredients in edible films must be Generally Recognized As Safe (GRAS). One of the first commercial film-forming agents was hydroxylpropylmethylcellulose. Other hydrocolloids that are commonly used to form edible films include polysaccharides such as carrageenan, carboxymethylcellulose, gum acacia (arabic), hydroxypropylcellulose, modified starches, pectin, pullulan, sodium alginate, and xanthan gum, and proteins such as casein, whey protein, soy protein, corn zein, and gelatin. These hydrocolloids provide the structural backbone of the edible films. They also provide oxygen barrier properties to the films. Lipids, on the other hand, generally improve the water barrier properties of the films. Lipids such as waxes, shellac, fatty acids, fatty alcohols, and acetylated monoglycerides are used as ingredients in edible films. In addition, food grade plasticizers such as glycerol, sorbitol, or polyethylene glycol are added to improve film flexibility. Fibers improve film strength, enhance matte finish, and increase nutritional benefits. Examples of fibers include inulin, psyllium, and carrot fiber. Fruit and vegetable purees are also good film formers. Active additives, such as nutrients, colors, sweeteners, flavors, and breath-freshening compounds, are also often incorporated depending on the end-use application of the edible films. 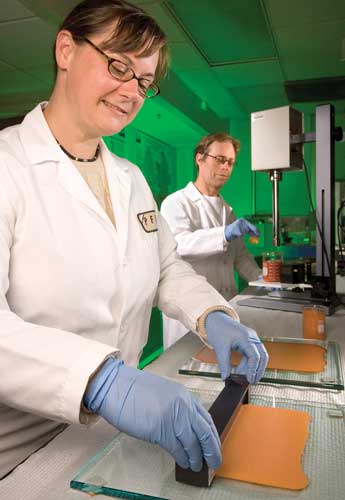 Casting Process
The first step in manufacturing an edible film is developing a film-forming formulation. This is normally done in the laboratory. Film-forming solutions commonly contain water-soluble polymers, plasticizers, fibers, colors, flavors, and sweeteners. Mixers are used to solubilize these ingredients over a wide range of  viscosities and shear, while in some cases heating the solutions. In other cases, emulsification of lipids is desired. Once the solution or emulsion is formed, a vacuum is commonly applied to remove air bubbles that may limit the strength and barrier properties of the final films. In some cases, such as for foamed films, bubbles are desired and bubble formation is enhanced through processing and through the addition of surfactants such as lecithin. Most formulation solution solids contents range from 20% to 35% with viscosities between 1,000 centipoise and 10,000 centipoise.

Film-forming solutions are then poured onto plates made from glass, Teflon, polyethylene, and other materials and drawn down over the plate to a uniform thickness using draw-down blades or rods as in the photo on this page. Coated plates are then placed into convection ovens for rapid drying at elevated temperatures. In some cases, multilayer films are created by sequentially applying and drying solutions onto films.

Once acceptable formulation and process conditions are identified in the laboratory, the process is scaled up either on a pilot line or in a commercial manufacturing facility. See photo on this page for an image of a continuous pilot-scale casting system (Werner Mathis AG). Converting the aqueous solution into an edible film is essentially a three-step process involving coating, followed by drying, and finally converting.

Knife-over-roll coating is commonly used to commercially manufacture edible films. In this method, the stationary, rigid knife doctors a precise layer of solution onto a casting substrate moving under the knife. The wet film thickness is controlled through micrometer adjustments in the height of the knife above the casting substrate. Excess solution is held in a pool behind the knife. Since a roll or drum is normally positioned below the knife, the process is known as knife-over-roll coating. Important factors to consider in optimizing the coating step include formulation, wet film thickness, viscosity, solids, temperature, number of layers, and substrate. Slot die extrusion is an alternative type of coating that can be used to coat aqueous coatings onto moving substrates.

The two types of casting lines used to manufacture edible films are casting on steel belts and casting onto webs or flexible substrates, such as plastic films. When casting onto steel belts, the belt rotates around large drums situated at either end of the line. Solutions are applied uniformly at one end of the line and carried through the drying chamber to remove water. Stainless steel belts provide optimum uniformity, heat transfer, and drying efficiency while eliminating the expense of the flexible substrate; however, many film-forming solutions strongly adhere to the steel belt. In these cases, release substances can be added or flexible substrates can be employed on top of the steel belts. Web casting, casting directly onto flexible substrates such as polyester films or coated release papers, is the second type of casting line. Support rolls provide the web stability as it moves through the drier. Both types of casting lines allow for solutions to be dusted with powders to prevent sticking, coated with secondary thin coatings, printed with edible inks, and/or receive other treatments before being stripped from the substrate and wound into large master rolls.

Drying is an essential step in forming edible films. The primary solvent being removed during drying is water; however, small amounts of volatile flavors and other ingredients may be removed as well. There are three stages during film drying (transition, constant rate, and falling rate). Zone drying is best suited to optimization of drying during each of these stages and production of high quality films free from process defects. Various types of heating can be used in the different zones, including hot air convection, hot air impingement, steam, and infrared drying. Infrared drying is particularly effective at driving off initial moisture in the films during the transition stage, and the other types of heating are commonly used for the later stages of drying in zone units.

The final step in the processing of edible films is converting. The large rolls of films need to be converted into their final forms, such as smaller rolls, sheets, strips, or die cuts. A wide variety of slitting machines, as well as sheet and die cutters are available for this purpose. 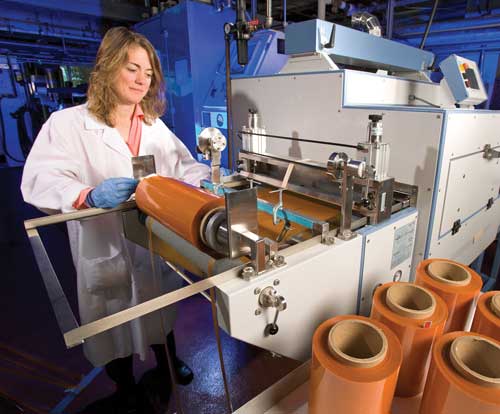 Commercial Markets for Edible Films
The largest market for edible films is the film strip market. This segment was dominated by Listerine breath strips, which were introduced in 2000 and quickly hit a retail market peak at about $400 million. The breath strip market has settled down to a sustained business at about $100 million in annual sales. An additional $10 million market exists for film strips used to deliver energy, sleep aids, sore throat treatments, and other nutraceutical and dietary ingredients.

Another market for edible films is their use as decorative shapes that provide color and flavor in foods. These can also be used to deliver nutrients and other active ingredients. This market segment is estimated at $8–$10 million in sales. The largest segment is in small menthol-flavored squares used in toothpaste applications. Other shapes are used to decorate cakes, cookies, cereals, yogurt, and other foods.

Edible packaging films have been used to form pouches that provide premeasured amounts of ingredients, for example a vitamin and mineral enrichment for batches of bread dough. Edible pouches are also used for foods like oatmeal or drink powders. The value of this segment is estimated at $1–$2 million. Commercial edible films manufacturers for the above three markets include Innoteq, Watson, Biofilm Limited, ODF Pharma, Proinec, MonoSol, Umang Pharmatech, and others.

A recent market entry into edible films is their use as alternatives to nori, the seaweed wrap around sushi and low-calorie, gluten-free, alternatives to breads and tortillas. NewGem Foods is a leader in this category and has developed several lines of fruit- and vegetable-based films to meet these market needs. Flavored fruit films are also used as glaze sheets for hams and other meat products, eliminating the need for messy liquid glazes.

An additional market for edible films is the cake decoration market. Edible inks are used to print custom designs on the edible films to produce a wide array of decorative edible sheets for baked goods. Lucks Food Decorating Co. is the leader in this category.

What’s Ahead for Edible Film
In the future, new technologies like thermal extrusion and 3-D printing may be employed to manufacture edible films. It is anticipated that delivery of functional bioactives, such as probiotics and natural antimicrobials will be a continued growth area for edible film. Future applications of nanoscience to edible films offer additional opportunities to transform the properties of edible films. Finally, edible films offer potential to be used as alternatives to synthetic packaging.