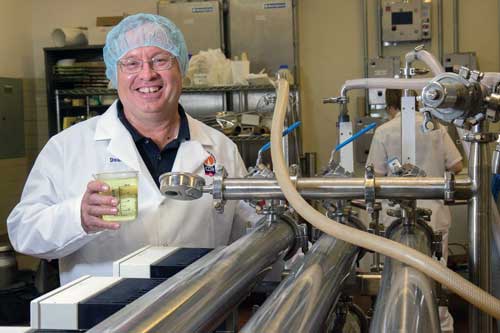 Transforming acid whey into valuable ingredients
Booming consumer demand for Greek yogurt has created a problem for its manufacturers, namely the acid whey byproduct of yogurt production. Yogurt makers have dealt with the issue by paying to have it spread onto farmers’ fields or flushing it down the drain. Some companies are treating the acid whey in anaerobic wastewater digesters, where it’s fermented to produce methane.

Scientists at the University of Wisconsin-Madison claim that they have a better option—one that will transform the byproduct into valuable ingredients. “The whole goal is to take this problematic mixture of stuff—acid whey—and isolate all of the various components and find commercial uses for them,” said Dean Sommer, a food technologist with Wisconsin Center for Dairy Research (CDR) in the UW-Madison College of Agricultural and Life Sciences. Not an easy task.

Food companies have been separating the components of sweet whey—the byproduct of cheese production—for many years, extracting high-value whey protein powders that are used in nutritional products and other high-protein foods and beverages.

Compared to sweet whey, however, acid whey is difficult to work with. Both products are mostly water (95%) but acid whey contains a lot less protein, which is considered the valuable part. Some of the other “solids” in acid whey, which include lactose, lactic acid, calcium, phosphorus, and galactose, make it more difficult to process. For example, the galactose and lactic acid turn into a sticky mess when dried.

Instead of drying it, CDR scientists are developing technologies that utilize high-tech membrane filters to separate out the various components. “We’re taking the membranes that are available to us and stringing them together and developing a process that allows us to get some value-added ingredients out at the other end,” explained dairy processing technologist Karen Smith, who is working on the project.

At this point, the CDR has set its sights on lactose, an ingredient that food companies prize in its food-grade form. “It’s the lowest hanging fruit, the most valuable thing in there in terms of volume and potential worth,” said Sommer. While Sommer can’t divulge names, several companies are already implementing the lactose-isolating technology in their commercial plants.

Extracting the other components will come later, part of the long-term vision for this technology. When it’s perfected, explained Sommer, acid whey will be stripped of its ingredients until there’s nothing left. “It will just be water,” he declared.

Engineered yeast may improve health benefits
University of Illinois (U of I) scientists have engineered a yeast that may increase the health benefits of wine and other foods while reducing the toxic byproducts that can cause headaches.

“Fermented foods—such as beer, wine, and bread—are made with polyploid strains of yeast, which means they contain multiple copies of genes in the genome. Until now, it’s been very difficult to do genetic engineering in polyploid strains because if you altered a gene in one copy of the genome, an unaltered copy would correct the one that had been changed,” said Yong-Su Jin, U of I associate professor of microbial genomics and principal investigator in the Energy Biosciences Institute.

To solve this dilemma, scientists have developed a “genome knife” enzyme that cuts across multiple copies of a target gene in the genome very precisely—until all copies are cut. Jin’s group has used this enzyme, RNA-guided Cas9 nuclease, to do precise metabolic engineering of polyploid Saccharomyces cerevisiae strains that have been widely used in the wine, beer, and fermentation industries.

The possibilities for improved nutritive value in foods are staggering, he said. “Wine, for instance, contains the healthful component resveratrol. With engineered yeast, we could increase the amount of resveratrol in a variety of wine by 10 times or more. But we could also add metabolic pathways to introduce bioactive compounds from other foods, such as ginseng, into the wine yeast. Or we could put resveratrol-producing pathways into yeast strains used for beer, kefir, cheese, kimchee, or pickles—any food that uses yeast fermentation in its production.”

Jin stressed the genome knife’s importance as a tool that allows genetic engineers to make these extremely precise mutations. “Scientists need to create designed mutations to determine the function of specific genes,” he explained. “Say we have a yeast that produces a wine with great flavor and we want to know why. We delete one gene, then another, until the distinctive flavor is gone, and we know we’ve isolated the gene responsible for that characteristic.”