Instrumentation companies are continually introducing new instruments, improvements, and applications for food and beverage analysis. Here are some examples. 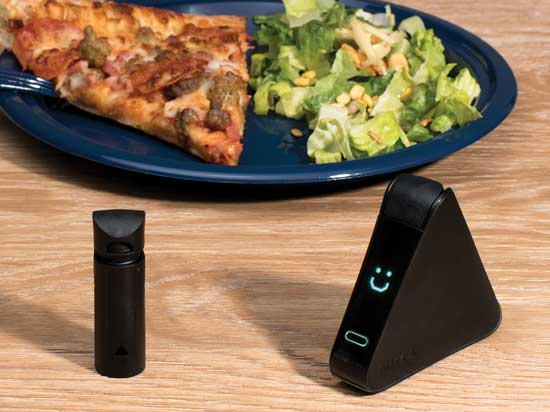 Gluten Testing
6SensorLabs, San Francisco, Calif. (6sensorlabs.com), recently introduced a portable handheld device called Nima that consumers who must avoid gluten in their diet can use to detect gluten in their foods at home and in restaurants. The company’s lead scientist, Jingqing Zhang, said that the sensor allows consumers to test samples of food in about two minutes and will clearly indicate whether a food contains gluten. The device was made available via a website, nimasensor.com, for preordering in late October, and starter kits consisting of the reusable sensor and three disposable test capsules will be shipped to those customers in mid-2016, followed by general availability of the device.

To use the rechargeable device, said to be the first of its kind on the market, the user places a sample of food into a disposable capsule and screws on the cap, inserts the capsule into the device, and presses the power button. The device will display a smile within two minutes if less than 20 ppm of gluten is detected and a frown if 20 ppm or more is detected (the U.S. Food and Drug Administration [FDA] requires a gluten-free food to have less than 20 ppm of gluten). The company plans to provide early in 2016 a smartphone application that will allow users to share their results with other users of the device. They will be able to view previous test results before dining out and report new results from their own meals.

The disposable cartridge contains chemicals that extract the protein from the sample and an immunoassay with an antibody specific to gluten. The presence of gluten will trigger the antibody to bind to the gluten molecule and cause an optical response or color change. An electronic sensor built into the device reads the result and translates it into a smile or frown on the display. To achieve the sensitivity and specificity wanted in the device, Zhang said, the company spent a year developing its own custom gluten antibody.

The device has been tested with solid foods (mushy, crunchy) and liquids (sauces, soups, drinks) but is not applicable to fermented foods and drinks such as beer and wine. The company is aiming for 99.5% accuracy before it will ship the device to consumers. In developing and manufacturing the device, the company followed standards of the International Organization for Standardization to ensure that it is of the highest quality and will publish third-party validation results for the device before it is shipped to consumers, Zhang said.

Turning a complicated lab process into a simple consumer device incorporating sample preparation, immunochemistry, and sensors into an easy-to-use product posed substantial design challenges, she said. The company has filed for several patents covering the device itself, the integration of chemistry and sample prep in a disposable cartridge, the relationship between the disposable cartridge and the Nima unit, and the electronic sensors and algorithms used for sample detection.

The company plans to develop versions of the device to identify the presence of all eight major allergens: wheat, milk, peanuts, eggs, fish, crustacean shellfish, tree nuts, and soybeans. The company is already working on tests for milk and peanuts and expects to release them in 2017. It is developing tests for individual proteins but is considering multiplexing, testing for several allergens in the same device. There are challenges in developing a multiplex version, Zhang said, even for as few as two allergens. Each protein requires a different chemical composition of solution to extract it. Multiplexing would require development of a universal extraction solution that would extract all proteins at once. Another challenge, she said, is that the detection of each protein requires its own real estate in a device and keeping the device small and portable leaves limited space for multiplexing.

Pathogen Screening
BioDetection Instruments Inc., Fayetteville, Ark. (biodetection-instruments.com), was recently awarded a Small Business Innovation and Research Phase I grant from the FDA to develop a fully automated food pathogen screening system with integrated sample concentration. The phase I study will focus on the detection of Salmonella Typhimurium in ready-to-eat foods since it is one of the top five pathogens causing foodborne illnesses in the United States. The expected completion date of the grant is February 29, 2016.

Company chairman Calvin Goforth said that the company will use the grant to develop a prototype instrument that is based on the company’s Aegis 1000 instrument but adds automated large-volume food sample preparation and concentration, which further enhances the detection limit and reduces the detection time. The Aegis 1000 utilizes highly efficient microfluidic bioseparators/bioreactors that specifically capture and separate target biological and/or chemical agents such as bacteria, viruses, proteins, toxins, pesticides, antibiotics, etc. from food, water, environmental, or clinical samples and quickly generates quantitative optical signals. The instrument has been shown to accomplish single-cell detection of Escherichia coli O157:H7 within a single eight-hour working shift, and the new design with integrated sample concentration will extend this capability to single-cell detection of Salmonella and Listeria, Goforth said. The current Aegis 1000 can detect E. coli O157:H7 as low as 100 cells/mL in 2 hours or less without any sample pre-enrichment.

The prototype system will consist of a large-volume sample processing module, a microfluidic assay cartridge with built-in valves and preloaded reagents that capture target pathogens from the sample and hosts the immunological and enzymatic reaction, a detection module that provides optical measurement, and a touchscreen controller. To use the system, the user snaps the cartridge onto the instrument, loads a sample into the sample preparation module, and clicks the power button on the touchscreen. The sample is automatically concentrated and purified. The cartridge then specifically captures and separates the target bacteria and performs the biological reaction, and the detection module quickly generates quantitative optical signals such as relative light units. Goforth said that the company expects to have demonstrated feasibility of the prototype system by the first quarter of 2016 and is seeking large-company partners for regulatory approval and sales and marketing cooperation. 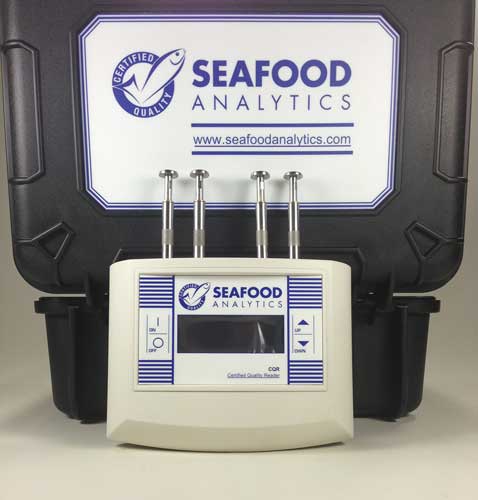 Fish Quality Testing
Seafood Analytics, Clinton Township, Mich. (seafoodanalytics.com), earlier this year introduced its Certified Quality Reader (CQR), a handheld, non-invasive device that uses electrical current to instantly provide objective freshness data for more than 10 fish species. Company co-founder Michael Liedtke said that the technology, developed by the company’s chief science officer and co-founder, Keith Cox, is based on electrical properties. As a fish degrades, cellular integrity breaks down and the cellular structures release their contents into interstitial spaces, so the tissue loses both nonconductive membranes and conductive fluids from inside the cells. A freshly caught fish will have higher-integrity cell membrane material and thus lower conductivity than a fish that has completely decomposed or has not been properly handled.

The bio-electrical impedance device uses feedback from electrical currents to instantly provide objective measurement of cellular integrity (i.e., freshness data). When the handheld array of four stainless-steel electrodes touches a fish, the two signal electrodes introduce an electrical current and the two detecting electrodes measure it. The device measures both non-conductive intact cell membranes and conductive extracellular material at the same time and presents quantitative metrics that can be used to determine certified quality, days/hours since harvest, shelf life remaining, temperature abuse, FDA and European (Torry) correlated sensory scores, and whether the product was ever previously frozen. Liedtke said that it quickly and accurately tells how far along the fish is in its natural decomposition timeline under normal conditions.

In March 2015, Oregon State University’s Seafood Research & Education Center validated the product by concurrently conducting sensory evaluation and CQR measurement of seafood undergoing degradation. The study concluded that the CQR results strongly correlated with sensory decomposition scores and that the CQR can be used as an effective quality control tool by all parts of the supply chain, including suppliers, processors, distributors, buyers, grocery stores, and restaurants.