A silo is often a symbol for farms and food; it is also a metaphor for focusing on information in one area of expertise, ignoring knowledge or applications from another. Such a narrow approach has its limitations, particularly as it pertains to issues that have plagued the food industry for decades. But researchers at the University of Minnesota-Twin Cities are employing an interdisciplinary approach to food quality, food safety, and food waste with rapid detection tools, and the outcomes expand the science of food in remarkable ways. 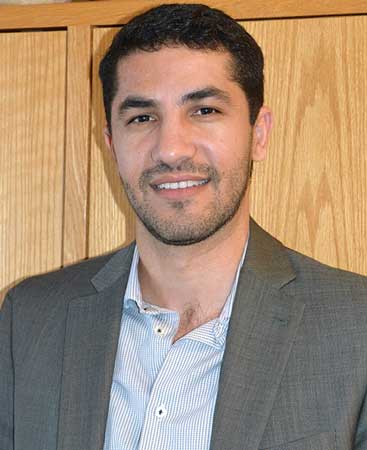 Solving Problems in Colorful Ways
“Sometimes you have problems in one field but the solutions are in another field,” says Abdennour Abbas, an assistant professor of biosensors and bionanotechnology at the University of Minnesota. Abbas, who teaches and conducts research for both the Dept. of Bioproducts and Biosystems Engineering and the Dept. of Food Science, has a transdisciplinary background that shapes his approach to problem-solving. “[Most] people don’t know what’s on the other side. When you try to understand what’s in different disciplines, you can actually have a very interesting [perspective] on what the problems are and where you can find the solutions,” he reasons. Having earned undergraduate degrees in biology, biochemistry, and biotechnology and graduate degrees in physical chemistry and materials science and engineering, Abbas previously used his knowledge of biology, chemistry, nanotechnology, and physics to solve problems in the medical industry. Now he’s applying his expertise to food and agriculture, and statistics on food waste and foodborne illness were the catalyst for this shift. 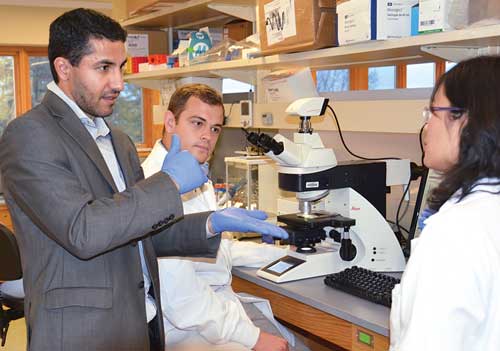 The fact that at least 30% of the food produced in the United States goes to waste had a profound effect on Abbas. “I was surprised. Thirty percent is a very big number,” he says. He was similarly affected by the CDC’s statistics on foodborne illness—in particular, the reality that one in six Americans contract it every year. Issues such as these as well as several environmental and sustainability factors have generated largely untapped markets for the types of products Abbas and his research team are developing. “The market is a very important thing. It’s not only about the money that can come from the market; it’s about [developing] a product that can help solve problems,” Abbas says. To that end,Abbas and his laboratory staff have created tools for rapid detection of foodborne pathogens and food spoilage. In the food safety and food quality arena, these systems not only solve problems but change the game, eliminating the lag between administering a test and obtaining results.

Testing for the presence of pathogens in food products generally involves sending samples to a laboratory for a cell culture and waiting anywhere from 12 hours to several weeks for the results. During that time frame, either the food degrades in quality while manufacturers wait for test outcomes or the food is shipped before testing is concluded—which, if pathogens are present, leads to costly food recalls and/or widespread outbreaks of foodborne illness. Food manufacturers “don’t have time to wait three or four days or one week” for testing, Abbas observes. “It is a big waste of time and resources … if [manufacturers] hold products while waiting for results. So the industry wants a technology that enables a rapid detection in less than two hours.” After scrutinizing conventional methods, Abbas concluded that such testing needed to be not only rapid but also sensitive, specific, and cost-effective. Colorimetric tests met these requirements: they are very sensitive, eliciting accurate results in a short period of time, and they don’t require the purchasing of expensive equipment. Abbas’s naked-eye bioassays for rapid detection of foodborne pathogens are fairly simple to perform and indicate the presence of bacteria, fungi, and/or molds. “We designed the technology with an amplification system, so [these bioassays] can detect less than 10 microbes in a single sample,” he says. 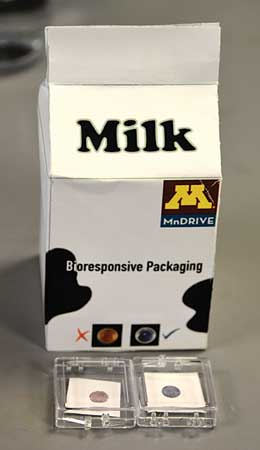 Abbas and his laboratory team have also used colorimetric technology to develop biosensors that detect food spoilage. One application is a biosensor integrated into milk cartons that can alert grocers and consumers to the quality of the dairy product inside. And although milk is the first packaging application undergoing commercialization, the biosensor—which consists of a bioresponsive polymer—is applicable to other foods and packaging. “The same technology can be applied to other products [such as] fish or meat,” Abbas reveals. The biosensors, as well as the bioassays, are thus customizable and can be outfitted with various sensing receptors (e.g., DNA or antibodies) to determine pathogens specific to different foods. Abbas and his team even have a biosensor that can be utilized much earlier in the food supply chain during agricultural production. 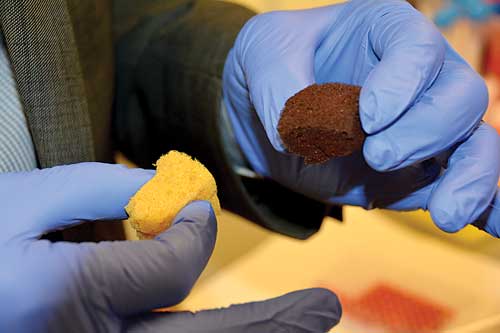 Solutions for Environmental Issues
Farmers apply nitrogen fertilizers to enhance the growth of food crops, but too much application can result in soil runoffs that contaminate water resources, causing algal blooms, oxygen depletion, and the rapid demise of aquatic life. “Farmers don’t know how much nitrate is in soil, so they keep applying fertilizers in significant quantities,” Abbas explains. “[Farmers] need to know how much nitrogen is in the soil, so [they] can know how much fertilizer to use.” Abbas’s portable biosensor that detects nitrate in soil may be the solution to this problem. His concern for the environment in which food grows extends not only to soil but also to the sea. “I knew when I was living in France that there were fish contaminated with mercury, but when I moved to Minnesota, I found that it is a much bigger problem. It’s actually a global problem: Everywhere, you cannot eat fish more than twice a week; for some fish you cannot eat them more than once a month or you cannot even eat them—especially the big ones because they have more accumulation of mercury. So we are perhaps reaching a point where we cannot eat fish, and that’s a big problem for me,” he says. His solution to that problem is a special sponge that absorbs mercury from water.

Abbas’s innovative solutions to problems in food, agriculture, and the environment have led to four patents and caught the attention of key players in the food industry. Consequently, his research is being funded by both General Mills and the Schwan Food Company. DuPont Corp., which has a food diagnostics division, has also expressed interest in his laboratory’s work. “They all know how important this issue is. Rapid microbial detection technologies … reduce recalls, food spoilage, and food waste, which are all very big problems” for the food industry as a whole, he emphasizes. The University of Minnesota has also allocated a half million dollars to Abbas’s laboratory through its Minnesota Discovery, Research, and InnoVation Economy (MnDRIVE) Global Food Venture, a partnership between the university and the state of Minnesota that promotes a collaborative research model to address large-scale food challenges. Collaborating with Abbas on the MnDRIVE project is Srinand Sreevatsan, a professor of epidemiology, public health, and food hygiene in the College of Veterinary Medicine.

Tools for Animal Safety
Rapid detection of pathogens in food products is one way to reduce foodborne illness; detecting pathogens in food animals while they are in the field— before they are processed (milked, slaughtered, etc.) for food—is another. For the MnDRIVE project, Sreevatsan is partnering with Abbas to address the latter (i.e., detecting pathogens in food animals). An expert on how bacteria and viruses interact with hosts and the environment to cause infections, Sreevatsan has been using information gleaned from such interactions to develop improved diagnostic tools and methods for identifying and characterizing microbes. Many pathogens, particularly viruses, can live in hosts for awhile and be completely undetectable with conventional methodology, so the need for improved diagnostics is significant. In addition, growing Salmonella, E. coli, hepatitis A and E viruses, and other pathogens from animal specimens can take a long time (weeks or months) and requires considerable expertise. Indisputably, rapid detection tests would be quite useful at the beginning of the food supply chain as well as at the middle or end. “If we are able to identify [an] infection very early … we can cull those animals that are not showing [obvious] signs of infection,” Sreevatsan says. Therein lies the nature of Abbas’s collaboration with Sreevatsan: “Bioassays use antibodies, and antibodies are specific to pathogens. But antibodies are expensive, and you cannot find antibodies for some pathogens,” Abbas says. But a diagnostic tool developed in Sreevatsan’s laboratory rivals antibodies for pathogen detection: aptamers.

Aptamers “are DNA molecules that bind to the surface molecules of [pathogens] with high affinity” and specificity, Sreevatsan explains. Aptamers can be made to target any type of pathogen and used in place of antibodies for rapid detection bioassays. For this reason, aptamers are often referred to as synthetic antibodies. As with Abbas’s rapid detection tests for foodborne pathogens, a color change would indicate the presence of pathogens in animals. “Imagine the same technology being taken to the field and being applied, say, cow-side. You can actually see [the result] with a [naked] eye; you don’t need a special instrument to read it,” Sreevatsan declares. “That’s the beauty of the technology: The detection system is universal; the only thing that changes is the [aptamer] ligand that specifically recognizes any one of these pathogens.” 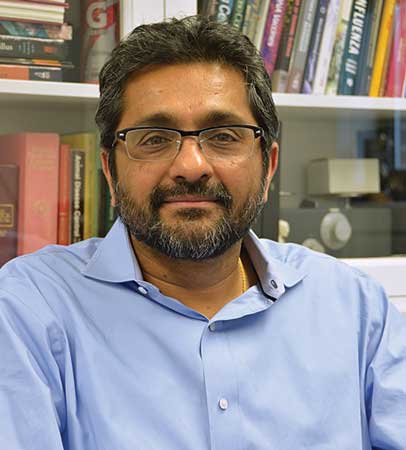 Sreevatsan is an authority on aptamers, as he has been studying and developing them for 14 years, but they are not the sole focus of his research. His laboratory has been working on other diagnostic tools such as biomarkers and iron-acquisition molecules as well as enhanced tools for intervention strategies, such as vaccines. Developing vaccines for viruses that enter through mucosal surfaces is a particularly challenging project that Sreevatsan has taken on. “Hardly any vaccines are being tested in animal species [that] elicit a good robust mucosal immune response that would [intervene] at the most proximal step in the infectious cycle, which is at the onset or entry of the organism. We are looking at mucosal vaccines that can do this,” Sreevatsan reveals. Another idea Sreevatsan is pondering is a more sophisticated animal-tracking system. He envisions a digital identification method involving the creation of a genetic bar code for each individual animal of a genotype. Such bar codes would be used to track animals as they move from location to location. “Coming up with a barcode for each animal is going to be a tough one, [but] maybe [single nucleotide polymorphism] signatures for animal identification would be applicable. If we can make that technology affordable and easily doable in the field, that would be a perfect case scenario,” Sreevatsan says. None of this is in development yet: “It’s just something we’ve been thinking about,” he says, but he is exploring ways to realize these concepts.

At the University of Minnesota, Abbas and Sreevatsan are taking an interdisciplinary view of solutions to food safety, food quality, and food waste, and they have the freedom and resources to apply unconventional approaches to tackle those issues in groundbreaking ways. Their global perspectives could soon diminish persistent food problems and help save lives.