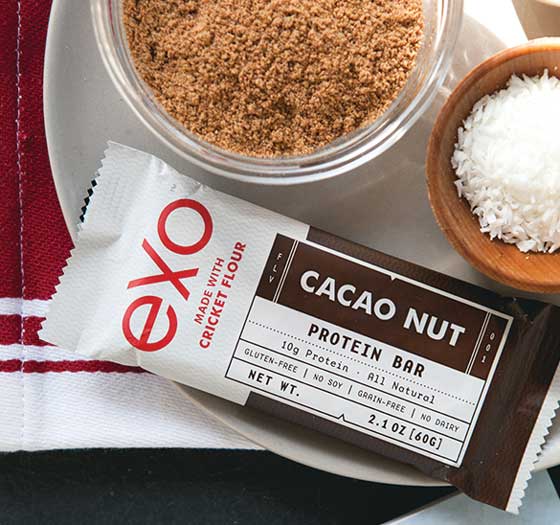 Despite the buzz surrounding Exo bars’ protein source, Exo Inc. co-founder Gabi Lewis didn’t necessarily set out to make a cricket bar. Frustrated by what he saw as a lack of great options in the protein-bar arena, both in terms of taste and nutritional content, Lewis, then a senior at Brown University, began to make his own bars in his dorm room. It was only after his roommate and eventual co-founder alerted Lewis to the potential benefits of insect—and specifically cricket—protein that the Exo bar was born. Lewis began taking the bars, which they formulated with flour they milled themselves from dried and cleaned crickets, to gyms before launching a Kickstarter campaign that raised around $55,000. Now armed with the help of a Culinary Institute of America–trained chef and backed by an enthusiastic customer base, Lewis and his team are busy expanding their insect empire.

Insect protein as a whole is experiencing a moment in the spotlight, thanks in large part to the environmental benefits it provides. Crickets specifically require less water and less space to grow than any other animal, such as pigs, chickens, and cows—it only takes 1 lb of feed to raise 1 lb of edible cricket protein, compared with 8–20 lb of feed that are required to produce 1 lb of beef. The resulting cricket protein contains all the essential amino acids as well as more iron than beef, more calcium than milk, and high amounts of micronutrients and omega-3 fatty acids.

Crickets are also 69% protein by dry weight, and as a powdered protein source, they may actually provide formulation advantages. Because the crickets can be milled very finely, there are no texture or mouthfeel issues, and unflavored, cricket flour provides just a slightly nutty, roasted flavor that doesn’t require the use of sweeteners to mask an unappealing taste. “You have this protein source that is essentially good for you and the environment with little to no drawback provided you can get past the psychological hurdle,” says Lewis, “which is what we’re working on and what we’re beginning to move past pretty quickly.”

Getting people to embrace insects as food, says Lewis, is not so different from the way other “exotic” foods were introduced in the past. The form these foods take can help make them easier to swallow. Just as the California roll helped U.S. eaters get used to the idea of consuming raw fish, bars may serve as the gateway for convincing a Western audience to take advantage of this protein source. While there are other companies using cricket flour in their products, such as chips and cookies, those applications require consumers to make two behavioral changes: first, looking to that type of product for protein, and second, accepting insects as its source. With bars, says Lewis, “we only have to convince them to make one behavior change, which is switch from one powder protein source to another powder protein source. In terms of lowering the psychological hurdle, and making the leap as simple as possible from a consumer’s perspective, I think bars is really the smartest way to go.”

That’s not to say that Lewis intends to limit the Exo brand and its use of cricket flour to bars. While he and his team are exploring ways to expand their line of flavors, including some savory options they are currently testing, Lewis’s ultimate goal is to raise awareness of how functional and versatile cricket protein can be. “So even though bars are the catalyst for this whole thing, we don’t see ourselves as a bar company,” Lewis says. “Ultimately we are trying to introduce this alternative protein source and bring it mainstream. I do think bars are the most sensible initial vehicle for doing that. They’re by no means the end of the story, but when we think about how you can introduce a new product to someone, a new ingredient, what we think about is making the behavior change as simple as possible.”