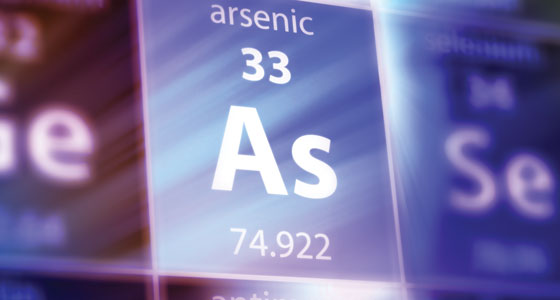 The topic of arsenic in food has received considerable attention in the popular press, from U.S. and international regulatory authorities, and in the scientific community in the past few years. It is clearly a controversial topic subject to scientific and regulatory deliberations that could significantly impact the food industry.

While it has been known for decades that the public may be exposed to arsenic by consuming many different food and beverage items, consumer awareness of dietary arsenic exposure was raised following publication in Consumer Reports magazine of monitoring results analyzing commercially available fruit juices (January, 2012) and rice-based products (November, 2012) for arsenic (Consumers Union, 2012a, b). The articles concluded that the U.S. Food and Drug Administration  (FDA) should set federal health standards for arsenic in fruit juices and in rice-based products. In July 2013, the FDA proposed an action level of 10 parts per billion (ppb), which is similar to the U.S. Environmental Protection agency (EPA) drinking water standard, for inorganic arsenic in apple juice; FDA concluded that this level was achievable under Good Manufacturing Practices and was protective of public health. While the FDA has not yet set an arsenic standard for rice-based products, the Joint FAO-WHO Codex Alimentarius Commission in July 2014 established a maximum level of 200 ppb for inorganic arsenic in polished rice.

Sources of Arsenic in Food
Arsenic is an element that is found in the environment from both natural and human sources. According to the FDA, arsenic occurs in the environment from erosion of arsenic-containing rocks, volcanic eruptions, contamination from mining and smelting ores, and previous or current use of arsenic-containing pesticides (FDA, 2014). It has also been alleged that arsenic additives used in chicken feed may enter the environment from runoff on adjacent chicken farms. Once introduced into the environment, arsenic makes its way into food products following absorption through soil and water. Foods that are produced following prolonged contact with water, such as seafood and rice, are often associated with higher levels of arsenic contamination.

Arsenic Health Effects
Inorganic arsenic is classified by the International Agency for Research on Cancer (IARC) as a human carcinogen (IARC, 2012). This designation is primarily attributed to studies in Taiwan and Chile that linked consumption of groundwater containing very high levels of arsenic (in the hundreds of ppb) with cancers of the skin, lung, and bladder. While it is clear that such high levels of exposure were responsible for the cancers in Taiwan and Chile, it is very difficult to determine what risks, if any, are posed by the much lower levels of inorganic arsenic exposure in the diet that consumers face today.

Traditional cancer risk assessment methods assume that threshold doses for carcinogens do not exist, meaning that exposure to any finite amount of a carcinogen could potentially result in the development of cancer, although the cancer risk is still related to the exposure (Winter and Francis, 1997). Linear methods extrapolate the  estresults from high-dose studies to predict potential risks at low doses; using such an approach, the National Research Council estimated that consumer exposure to drinking water at the EPA’s 10 ppb inorganic arsenic standard could result in approximately 1 additional cancer for 300 individuals exposed (NRC, 2001). Recent biomonitoring studies have also indicated the potential for moderate and/or low-dose impacts from dietary exposure to inorganic arsenic (Moon et al., 2013; Garcia-Esquinas et al., 2013).

A recent publication from Cohen et al. (2013) disputes the assumed lack of a cancer threshold and argues that the mode of carcinogenic action for inorganic arsenic involves formation of reactive trivalent arsenate metabolites that react in the body with cellular sulfhydryl groups to cause cytotoxicity and regenerative cell proliferation at high doses. Such effects are considered threshold effects, and typical dietary human exposure to inorganic arsenic is thought to be below this toxicity threshold. 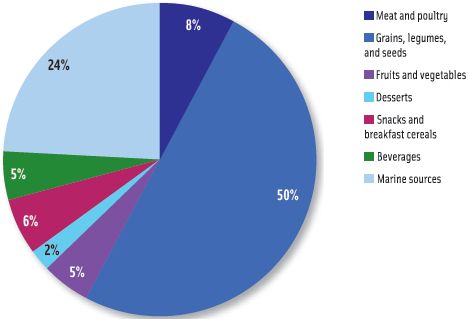 Using arsenic contamination data from the FDA’s 2006–2008 Total Diet Study, Jara and Winter (2014) recently published estimates of dietary exposure to total and to inorganic arsenic for a variety of population subgroups. This study developed a series of scenarios concerning the percentage of total arsenic from various food types that would exist in the inorganic form. In terms of total arsenic exposure, marine sources accounted for 69% of the total exposure, followed by grains (including rice), legumes, and seeds (20%). The grains, legumes, and seeds food group was combined with the snacks and breakfast cereals group to determine the specific contributions of rice to the total arsenic found in these groups. Foods containing rice, including rice cereals, rice snacks, and rice products, contributed 87% of the total arsenic exposure between these two food groups.

Using one of the more moderate scenarios that assumed 70% of terrestrial total arsenic and 10% of marine total arsenic existed as inorganic arsenic, exposure of the general U.S. population to inorganic arsenic (Figure 1) was highest from grains, legumes, and seeds (50%), followed by marine sources (24%), meat and poultry (8%), and beverages and fruits and vegetables (each 5%). 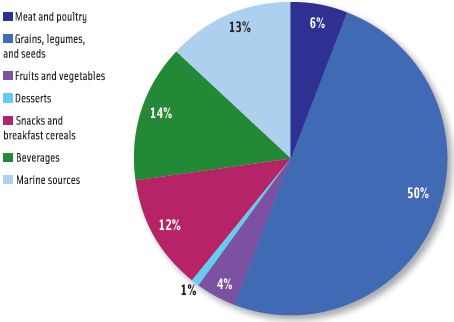 Exposures to inorganic arsenic for two-year-olds and for infants aged 6–11 months, determined using the same speciation scenario described above, are shown in Figures 2 and 3, respectively. The two-year-old subgroup also received its greatest exposure from grains, legumes, and seeds (50%) but also had increased exposures from beverages (14%) and snacks and breakfast cereals (12%) relative to the general U.S. population. The profile for inorganic arsenic exposure for the infants aged 6–11 months was much different; the major contributor was beverages (34%), followed by snacks and breakfast cereals (29%), and grains, legumes, and seeds (25%).

The EPA has set the Reference Dose for inorganic arsenic at 0.3 μg/ kg/day (EPA, 2012). This level represents an estimate of the daily consumer exposure, considered continuously over a lifetime that should not result in any adverse non-cancer health effects. The Joint Food and Agricultural Organization/World Health Organization (FAO/WHO) Expert Committee on Food Additives has considered exposures to inorganic arsenic between 2 and 7 μg/kg/day to represent levels of concern for potential skin, lung, and bladder cancers (FAO/WHO, 2011). 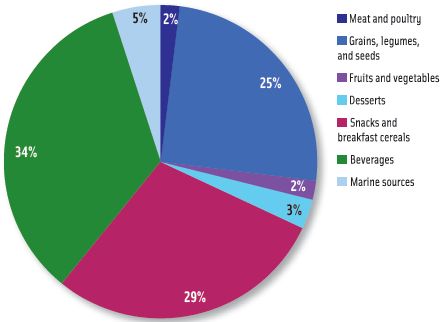 Exposure estimates to inorganic arsenic in the United States have recently been shown to be below the Reference Dose and the FAO/WHO level of concern. The study by Xue, et al. (2010) estimated exposures to inorganic arsenic between 0.03 to 0.04 μg/kg/day for the general population and 0.08 to 0.23 μg/kg/day for children under five. Exposure estimates for the nine scenarios constructed by Jara and Winter (2014) demonstrated inorganic arsenic exposure below the Reference Dose for all population subgroups, with the highest exposures seen for two-year-olds (0.11 to 0.28 μg/kg/day), and the U.S. general population exposures ranging from 0.03 to 0.08 μg/kg/day.

Food Industry Impacts
The topic of arsenic in food is one of keen scientific and regulatory debate, and interest in the topic is expected to remain high in the coming years. It will be interesting to hear the views of U.S. and international regulatory bodies regarding an inorganic arsenic threshold for carcinogenicity proposed by Cohen et al. (2013); should scientific opinion favor the threshold approach, it is likely that regulatory scrutiny may be relaxed. On the other hand, while estimates of dietary exposure to inorganic arsenic are currently below the Reference Dose, there are some population subgroups for which exposures closely approach the Reference Dose. Thus any modification to the Reference Dose based upon new scientific findings could significantly shift the debate and invite additional regulatory scrutiny for food products (in addition to fruit juices and rice) that contain arsenic.

Regulatory levels for inorganic arsenic have already been set in the United States for apple juice (10 ppb) and by the Joint FAO-WHO Codex Alimentarius Commission for polished rice (200 ppb). FDA monitoring data demonstrated that 89 of 94 apple juice samples tested showed levels of total arsenic below 10 ppb and the five samples where total arsenic exceeded 10 ppb did not contain inorganic arsenic above 10 ppb (FDA, 2013a). The FDA also analyzed 487 samples of rice for inorganic arsenic (FDA, 2013b). None of the samples for basmati, instant, jasmine, parboiled, or white (long, medium, and short-grain) rice showed inorganic arsenic levels exceeding 200 ppb. For the 99 samples of brown rice collected, 18 had inorganic levels above 200 ppb, with a maximum level detected at 249 ppb. It should be noted that arsenic levels in brown rice are expected to exceed those of white rice since much of the rice hull, which tends to concentrate arsenic, is removed in the processing of white rice. For these reasons, the Joint FAO-WHO Codex Alimentarius Commission inorganic arsenic standard of 200 ppb applies only to polished rice, and not to brown rice.

Elizabeth A. Jara is a PhD student, Dept. of Food Science and Technology, University of California, Davis ([email protected]).

Consumers Union. 2012a. Arsenic in your juice. How much is too much? Federal limits don’t exist. Consumer Reports. http://www.consumerreports.org/cro/magazine/2012/01/arsenic-in-your-juice/index.htm. Accessed Aug. 21, 2014.

Consumers Union. 2012b. Arsenic in your food. Our findings show a real need for federal standards for this toxin. Consumer Reports. http://consumerreports.org/cro/magazine/2012/11/arsenic-in-your-food/index.htm. Accessed Aug. 21, 2014.