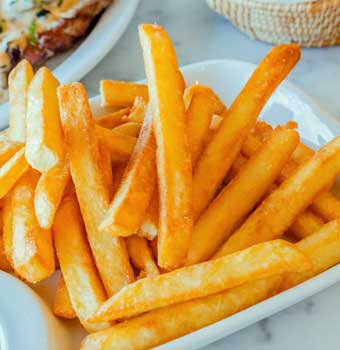 In air frying, raw potato sections are heated in hot air containing fine oil droplets; the process dehydrates the potato in an attempt to produce characteristics similar to traditional fries but with a lower level of fat absorption. In the study, the researchers examined both processes under otherwise similar operating conditions and compared their color, texture, microstructure, calorimetric properties, and sensory characteristics.

Although the air-frying method did produce fries with a substantially lower fat content, the process took much longer to complete—21 minutes versus nine minutes for deep-fat frying. The slower evolution of temperature resulted in lower rates of moisture loss and color development reactions, and differential scanning calorimetry studies showed that the extent of starch gelatinization was also lower in the air-fried fries. Overall, the air-fried fries had a dryer mouthfeel and appearance with a harder texture, resulting in fries that were more akin to a baked or puffed potato product.

In the study, which was published in the Journal of Food Protection, researchers tested delis for L. monocytogenes in two samplings. In the first, 6.8% of samples taken in 15 delis before daily operations began tested positive for the bacteria, and in the second, 9.5% of samples taken in 30 delis over the course of six months tested positive. In 12 of these, the same subtype was found in several of the monthly samplings. Most positive samples came from surfaces that do not normally touch food, such as floors and drains, but the bacteria can be unintentionally transferred to food and sicken customers.

“It’s kind of the Wild West,” says the study’s leader, Haley Oliver, assistant professor of food science. “Manufacturing has a zero-tolerance policy for Listeria, but that dissipates at the retail level. The challenge of developing systematic cleaning procedures for a wide variety of delis—which are less restricted environments than processing plants—can make Listeria harder to control.”

Cleaning procedures can only manage bacteria as long as the delis themselves are also in good condition, she says, with functioning drains and properly sloped floors. Delis might also consider reducing the number of items they carry to make thorough cleaning easier.

Benefits of high-altitude cooking
Cooking at high altitudes, where pressure is low, can intensify food’s flavor, color, and aroma while possibly improving its nutritional quality, according to research out of the Nestlé Research Center in Lausanne, Switzerland, and published in the Journal of Agricultural and Food Chemistry.

In their experiment, scientists prepared vegetable broth from the same recipe in three settings: at 833 meters above sea level, in the lab at ordinary pressure, and in the lab using high pressure. The results were analyzed both in the lab and by a panel of tasters. Researchers found that the broth prepared in the high-altitude, low-pressure setting—where water boils at a lower temperature and cooks food more gently—reduced food weight loss and increased the yield of vegetables while preserving the food’s natural amino acids, carbohydrates, and volatile compounds, including aromas. The researchers believe that imitating the conditions of high-altitude cooking through low-pressure boiling may help enhance food’s flavor without the need for flavor enhancers or additives.

Arctic apples are the result of more than 20 years of development, according to the company. These apples resist the enzymatic browning that’s caused by a reaction between polyphenol oxidase (PPO) and phenolics that normally occurs when fruit is cut or bruised. Arctic apples have been bred to suppress the PPO gene in a process called gene silencing, which utilizes low-PPO genes from other apples.

According to a press release, Arctic Granny and Arctic Golden trees can be planted and grown just like any other apple variety in the United States, and Canadian approval is expected later in 2015. 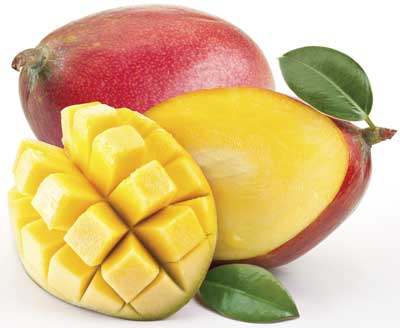 Cocoa butter is expensive, so manufacturers often look to cocoa butter equivalents (CBE) to mimic it in chocolate and pharmaceutical applications. Effective CBEs must provide similar physiochemical properties to cocoa butter at a lower cost. Many such CBEs have been explored, but until now, mango butter had not, according to the researchers.

Mango butter is derived from mango seeds, which are generally considered agroindustrial waste. In the study, researchers compared mango and cocoa butter in gelatin aqueous solutions and found that when used in this form, mango butter is sufficiently comparable to cocoa butter and may be used as a substitute—and at a low cost, since it takes advantage of a source that would normally be discarded.

“Alone in India, tons of mango seeds are discarded after harvesting the mango pulp,” says Kunal Pal, one of the study’s authors. “Any industrial raw product obtained from the waste of the agri industries is of low cost.”

• D.D. Williamson kicked off a yearlong celebration in observance of its 150-year anniversary.

• DuPont’s BAX System Real-Time PCR Assay for Listeria monocytogenes has been certified as a Performance Tested Method by the AOAC Research Institute.

• FOODesign launched a new website, Foodesign.com, that provides international customer support, an overview of the company’s portfolio, and updates on its latest news and events.

• ICL entered into a share purchase agreement to acquire Prolactal GmbH, and its subsidiary, Rovita GmbH.

• Ingredion has entered into a commercial agreement with Gelymar, a producer of carrageenan based in Santiago, Chile.

• Kalamazoo Valley Community College (KVCC) and Western Michigan University (WMU) are launching the nation’s first higher-education programs in sustainable brewing. Students will earn a certificate or associate degree at KVCC, then move on to a BS degree at WMU.

• Kalsec validated the kill step for Salmonella in its extraction process for spices and herbs.

• Mühlenchemie expanded its Technology Center to include a pilot plant for pasta.

• Nespresso will launch its first Nespresso Café in Vienna in March and open a second café in London at a later date.

• Solazyme announced that the U.S. Food and Drug Administration has issued a favorable response to its notification concluding that its whole algal protein is Generally Recognized as Safe as an ingredient in food and beverage products.

• Tyson Foods will invest around $110 million to expand its poultry plant in Vienna, Ga.

• Unilever’s Breyers ice cream brand will now source milk and cream only from farmers who don’t treat their cows with artificial growth hormones.