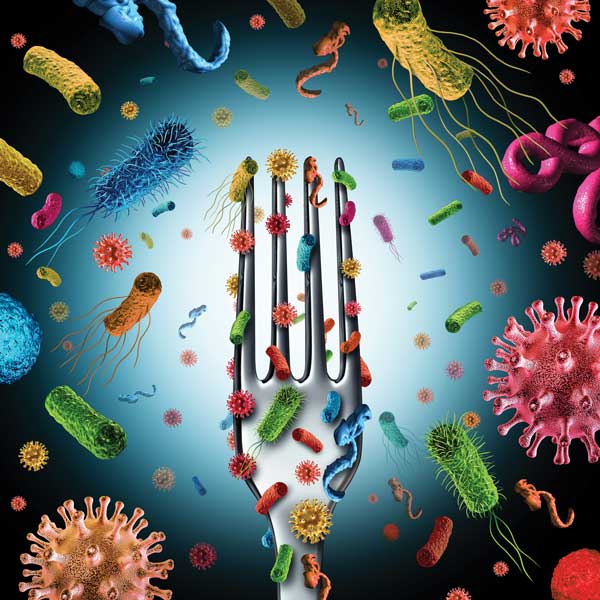 Approximately 48 million people get sick and 3,000 die of foodborne diseases each year in the United States, according to the Centers for Disease Control and Prevention (CDC) and the U.S. Food and Drug Administration (FDA). Salmonella is responsible for an estimated 1,029,000 cases of foodborne illness in the United States each year; Clostridium perfringens, 966,000; Campylobacter jejuni, 845,000; Staphylococcus aureus, 241,000; Escherichia coli, including Shiga toxin–producing E. coli (STEC) such as E. coli O157:H7, 205,800; Shigella, 131,000; Bacillus cereus, 63,400; Listeria monocytogenes, 1,600; Brucella, 840; and Clostridium botulinum, 55. Also of concern are the bacteria Yersinia enterocolitica, Mycobacterium bovis, Streptococcus spp. group A, and Vibrio species (cholerae, vulnificus, parahaemolyticus, and others); viruses such as astrovirus, hepatitis A virus, norovirus, rotavirus, and sapovirus; and parasites Cryptosporidium spp., Cyclospora cayetanensis, Giardia intestinalis, Toxoplasma gondii, and Trichinella spp. The Food Safety Modernization Act (FSMA) shifts the focus from responding to contamination and foodborne illnesses to preventing them.

Preventive Controls
The FDA finalized the FSMA rule Preventive Controls for Human Food in September 2015, and compliance dates began in September 2016. The rule requires the owner, operator, or agent in charge of a facility to evaluate the hazards that could affect food manufactured, processed, packed, or held there; identify and implement controls to minimize or prevent the occurrence of those hazards and ensure that the food is not adulterated; monitor the performance of those controls; and routinely maintain monitoring records. The FDA issued a draft guidance for industry on the rule on August 19, 2016, with a deadline of February 21, 2017, for comments; two other guidance documents will address key requirements for animal feed and pet food. The human-food draft guidance consists of five chapters covering specific sections of the rule but will eventually contain a total of 14 chapters.

Chapter 3 discusses the characteristics of vegetative and spore-forming foodborne pathogens and related hazards, including those pathogens that survive after treatment, those that grow and/or produce toxin, those that are in ingredients added after process controls, and those that are introduced after packaging due to lack of container integrity. Chapter 4 addresses the process control treatments such as thermal processing, use of antimicrobials, refrigeration, freezing, formulation (water activity, etc.), and others as well as sanitation controls.

The draft guidance includes questions that a processor might address in identifying hazards: Does the food contain any ingredients that may present microbiological, chemical, or physical hazards? What hazards may result if the food composition is not controlled? Does the food permit survival or promote pathogen growth and/or toxin formation during subsequent steps in the manufacturing process or distribution/storage? Does the process include a controllable processing step that destroys pathogens? Is the product susceptible to recontamination between processing and packaging? What is the baseline microbial content of the food? Does the microbial population change during the normal storage time of the food prior to consumption? Do changes in the microbial population affect the safety of the food? 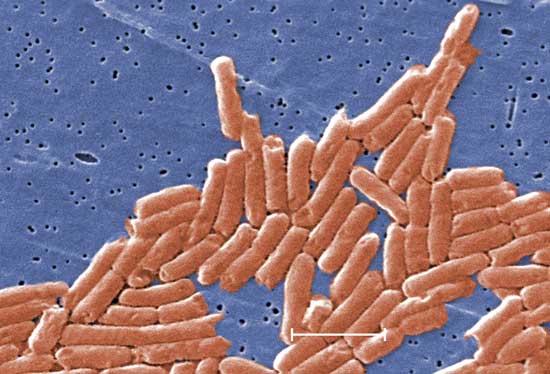 Pathogen Control Alternatives
Approaches for minimizing post-harvest microbial hazards in foods or on food processing surfaces include use of traditional processing steps such as heating, application of antimicrobials, and technologies such as irradiation. Alternative preharvest and postharvest approaches were discussed in presentations at previous IFT annual events.

Alexander Sulakvelidze, vice-president of research and development, Intralytix Inc., Baltimore, Md. (intralytix.com), discussed the use of lytic bacteriophages (phages) for postharvest control of bacterial pathogens in foods and food processing environments. He said that phages, naturally occurring viruses that attack specific target bacteria, can be used for environmental decontamination and direct postharvest food application. He reviewed the literature, discussing such research as effect of phage treatment on L. monocytogenes levels in lettuce, smoked salmon, and frozen entrees; reduction of E. coli O157:H7 levels in refrigerated and frozen ground beef; and the effect on Salmonella incidence in chicken meat. Phages are approved by the FDA; are safe and effective; do not affect taste, appearance, or smell of foods; and have no adverse impact on normal microflora. However, they are only effective against the targeted pathogen, may be inactivated by commonly used disinfectants, and require refrigeration.

Tim McAllister, principal research scientist of ruminant nutrition and microbiology, Agriculture & Agri-Food Canada, presented results of a study to characterize a bacteriophage with potential as a preharvest treatment for control of STEC in cattle. Cattle are primary reservoirs of STEC O157:H7, and contaminated foods of bovine origin and vegetable products contaminated with bovine feces are sources of human infection. He reported the results of a study assessing the efficacy of several phages against E. coli O157:H7 isolated from cattle and humans. The results suggested that a cocktail of the four phages studied should be equally effective at mitigating E. coli O157:H7 isolates of bovine and human origin. He said that given the potential for some E. coli O157:H7 isolates to be phage-resistant, as well as for others to develop resistance upon phage exposure, a cocktail of phages may be the most efficacious approach to controlling the pathogen in feedlots. 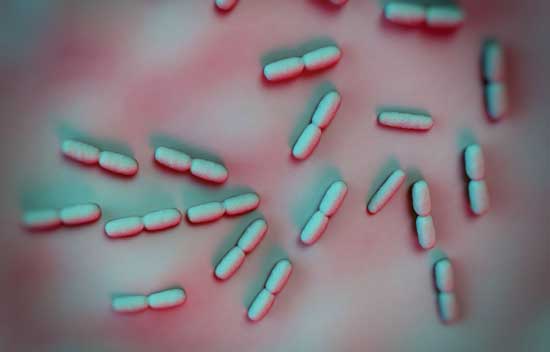 Suresh D. Pillai, professor of molecular microbiology, Texas A&M University, discussed how inhibitors that interfere with microbial cell-to-cell signaling could be introduced into foods to prevent microbial persistence and proliferation or be used in cleaning solutions to prevent biofilm formation on food processing equipment. Cell-to-cell signaling inhibitors such as those from ground beef that influence E. coli O157:H7 metabolism and E. coli K-12 biofilm formation, poultry-derived inhibitors, and limonoids have been found to function at the molecular level to prevent pathogen survival and function. There is active research attempting to exploit these inhibitors commercially. It is important to bear in mind, he said, that microbes have experienced more dynamic and extreme conditions and therefore have more natural mechanisms to survive extreme conditions. He added that most technologies besides irradiation technologies such as electron beam may be limited in scope and that the food industry should not be looking for the silver bullet but rather be open to using all relevant technologies in a toolbox-type strategy.

Mary Anne Amalardjou, assistant professor of animal science, University of Connecticut, discussed the potential of probiotics directly fed to poultry to reduce the intestinal load of Salmonella and subsequent contamination in poultry production. She said that supplementation of probiotics such as Lactobacillus, Lactococcus, Enterococcus, Pediococcus, and Bacillus through feed and water or by vent lip administration have shown increased resistance of poultry to Salmonella infections; reduced cecum colonization; and improved weight gain, feed conversion ratio, breast meat quality, and egg production.

Anup Kollanoor-Johny, assistant professor of animal science, University of Minnesota, said that antibiotic use has favored the selection of resistant bacteria in food animals, such as Salmonella, E. coli, and Campylobacter strains. He discussed research opportunities for exploring safer alternatives to antibiotics, including use of phytobiotics and plant-derived compounds, refining existing regimens, potentiating antibiotics with phytobiotics, and conducting applied and mechanistic research. He said that cinnamaldehyde and eugeneol could be used as an alternative antimicrobial against Salmonella Enteritidis in chickens and that cinnamaldehyde and thymol could be potentiators of antibiotics at sub-therapeutic doses. He discussed the effect of cinnamaldehyde and thymol on increasing the sensitivity of Salmonella Typhimurium definitive phage type 104 (DT104) to antibiotics. He added that removal of the selective pressure of antibiotics may not reverse bacterial resistance.

Matthew Taylor, associate professor of animal science, Texas A&M University, discussed the ability of fermentative nonpathogenic bacteria, bacteriophages, and antimicrobial fermentates to control O157 and non-O157 STEC in beef before and after harvest. He said that the primary types of biopreservatives are fermentative nonpathogenic microbes, principally lactic acid bacteria (LAB); bacteriophages; and fermentates from microbial growth that contain compounds with antimicrobial activity, such as acids and bacteriocins. Nonpathogenic bacteria such as LAB inhibit growth of the pathogen by competing with it for nutrients and colonization sites; bacteriophages directly attack the pathogen, killing it; and fermented metabolites with antimicrobial activity inhibit growth of the pathogen. He described studies of the effect of federally approved LAB-containing antimicrobials and LAB fermentate antimicrobials on the U.S. market on inhibition of S. enterica, E. coli O157:H7, and L. monocytogenes. He described an ongoing project, sponsored by the North American Meat Institute and Foundation for Meat and Poultry Research and Education, to determine the capacity of a commercial cocktail of non-O157 STEC-infecting phages to reduce non-O157 STEC on cattle hide pieces and determine the minimum number of phages required for successful host contact, infection, and killing.