Shape-shifting foods may reduce shipping costs
Researchers at MIT’s Tangible Media Group have created flat sheets of gelatin and starch that can instantly grow into 3-D foods, such as macaroni and rotini pasta, when submerged in water. The technology has also produced flat discs that can wrap around a filling, like cannoli, spaghetti that breaks into smaller noodles when mixed in hot broth, and flower-like configurations. While the culinary aspects of the technology are apparent, the real benefit may lie in reduced food shipping costs due to space savings related to volume.

At MIT, Wang and Yao got their idea for programmable pasta based on their work of how various materials respond to moisture. They looked at gelatin, which expands when it absorbs water. Yao and Wang designed a flat, two-layer film made from gelatin with two different densities. The top layer was more densely packed, enabling it to absorb more water than the bottom. When the entire structure is immersed in water, the top layer curls over the bottom layer, forming a slowly rising arch.

To control where and how much the gelatin bends, the researchers 3-D printed strips of edible cellulose over the top gelatin layer. Cellulose absorbs very little water and acts as a water barrier for the top gelatin layer. The researchers learned that printing cellulose in various patterns onto the gelatin could control the materials response to water and their resulting shapes. “This way you can have programmability,” Yao says. “You ultimately start to control the degree of bending and the total geometry of the structure.”

The researchers then worked with a chef to test their designs in a restaurant setting. Together, they made transparent discs of gelatin flavored with plankton and squid ink, which instantly wrap around small beads of caviar, and long fettuccini-like strips, made from two gelatins that melt at different temperatures, causing the noodles to quickly break apart when hot liquid dissolves certain sections.

Some of the research was funded by the MIT Media Lab and Food + Future, a start-up accelerator sponsored by Target Corp. 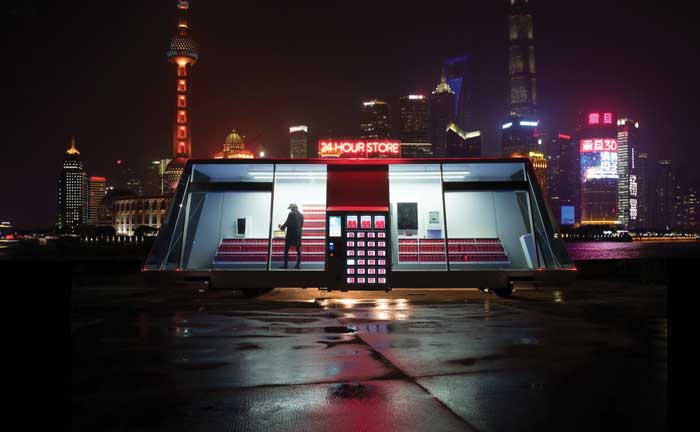 A different kind of food truck
If you don’t like going to the grocery store, help may be on the way with a mobile store that comes to you. Called Moby Mart and developed by Wheelys Inc. in cooperation with Hefei University and Himalafy, the prototype convenience store was unveiled in Shanghai in June. The developer claims that Moby Mart is autonomous with no staff. The store can be driven by a driver or by remote control; future stores will be self-driving. Moby Mart uses solar panels to charge a battery that powers an electrical engine.

The 24-hr store will offer typical convenience store fare—juice, fresh bread, snacks, and over-the-counter medicines. Through the use of artificial intelligence (AI), patent-pending inventions, and cloud technology, shoppers will use an app to enter the store, pay for the items, and leave. Customers can also order goods in advance for later pick-up. Each store has space for 60 pick-up parcels. Inside the store, customers are greeted by a virtual, AI hologram assistant that can suggest goods to buy based on shopping habits, store specials, or budgets. Customers can scan what they want to buy or place them in a smart shopping basket that registers purchases. A receipt is sent to a customer’s email.

The store automatically keeps track of its inventory, so it knows when to head back to the warehouse for restocking or to meet up with another Moby Mart to resupply or exchange goods. Each store will be equipped with four roof-top drones, which can deliver a smaller selection of its products. The store can be equipped with exterior vending modules for dispensing water, coffee, mini pharmacy, and money (ATM).

Wheelys plans to build the stores in China, and claims that each unit will cost less than $100,000. Moby Mart is currently in beta testing; commercial units are scheduled to hit the road in 2018.


If you are working on or know of some cutting edge technology that you would like to be featured in this column, please send an email to [email protected].