It is no longer acceptable for food manufacturers to institute a generic standard of sustainability. Consumers are looking for true transparency and positive and measurable impact—human, environmental, and societal. When Barry Callebaut, a manufacturer of chocolate and cocoa products, brought a group of journalists to Ghana to see firsthand the progress made during the inaugural year of its Forever Chocolate sustainability strategy, it became clear that being socially responsible means ensuring a prosperous future for both the business and the cocoa farmers that supply it.

Barry Callebaut launched Forever Chocolate in December 2016 with four ambitious, time-bound targets that build on the foundations of its other sustainability initiatives. The company has committed to achieve the following by 2025: 1) Lift more than 500,000 cocoa farmers out of poverty; 2) Eradicate child labor from its supply chain; 3) Become carbon and forest positive; and 4) Have 100% sustainable ingredients in all of its products.

To comprehend the ambitiousness of the Forever Chocolate targets, it’s necessary to examine the root causes for each issue and highlight the actions Barry Callebaut and its partners have taken in the past year to meet the targets. Finally, an important part of the process is reporting the impact each action has on the end goal in a way that is defined and measurable. “We aren’t committing on actions,” states Nicko Debenham, head of sustainability at Barry Callebaut and MD Biolands Group. “We are committing on impact.”

Lift Farmers Out of Poverty
The average cocoa farmer makes significantly less than the World Bank’s extreme poverty line of $1.90/day due to factors that include poor farming techniques resulting in low yields, aging trees, and limited access to fertilizers and planting materials. And, as Debenham explains, how successful Barry Callebaut is in reaching its targets is largely dependent on alleviating poverty. “Poverty is the cornerstone to our challenge,” says Debenham. “If we don’t address it, we won’t be able to solve child labor or deforestation.” 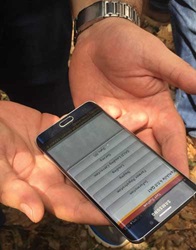 The company took a major step toward improving the welfare of cocoa farmers when, in 2015, it launched the Cocoa Horizons Foundation. This independent nonprofit organization works directly with farmers—through the company’s direct sourcing and farm services organization, Biolands—to train them in good agricultural practices and support them with materials and financing solutions. Additionally, farmers that enroll in the Cocoa Horizons sustainability program can earn premiums above the set price for their cocoa beans.

Soon after launching Cocoa Horizons, Barry Callebaut purchased Nyonkopa, one of the top 10 private Licensed Buying Companies in Ghana, and integrated it into the Biolands group. Nyonkopa is authorized to buy directly from farmers and sell to the Cocoa Marketing Co. of the Ghanaian Cocoa Board, which is the government-controlled institution that oversees the country’s cocoa sector, including quality control, sales, and marketing. In addition to working directly with farmers to provide coaching and inputs such as tools and seedlings, the technical officers at Nyonkopa are using a new cloud-based geo-traceability app, called Katchilè, to collect data on each farmer and map their farms. Barry Callebaut has started the mapping of 90,000 farmers in its supply chain.

Measured Impact: One year into the Forever Chocolate initiative, Barry Callebaut reports that it has seen a 23% increase in productivity per hectare. This has been achieved by replanting 175.5 hectares of cocoa and providing 5,814 farmers with access to coaching, inputs such as tools and seedlings, and financing options. 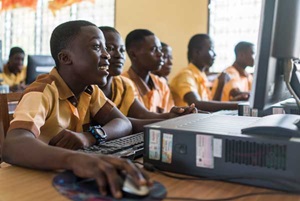 Eradicating Child Labor
As a direct result of cocoa farmer poverty, it is estimated that there are more than 2 million children working on cocoa farms in Côte d’Ivoire and Ghana. Unfortunately, despite investments in education and higher school attendance rate, child labor has not been eradicated in the cocoa industry. Solving the issue of poverty will make it easier for children to attend school on a regular basis and ensure their right to a childhood, but poverty is a complex issue that will require fundamental system changes to improve.

In the short term, Barry Callebaut is working with the International Cocoa Initiative to pilot a Child Labor Monitoring and Remediation System with more than 5,000 farmers in Côte d’Ivoire in 2016. Facilitators on the ground work with communities to track and remediate child labor, as well as pinpoint the factors that contribute to it. Through the company’s Katchilè app, the facilitators can collect information from farmers that may give insights into the child labor practices in the community. Having children work on their family’s farm is, in many countries, part of the culture, and therefore requires raising awareness in the community in order to bring about change.

In addition, the company has been promoting school enrollment and attendance, which often means helping families secure birth certificates for their school-age children and providing school kits at the start of the academic year. Barry Callebaut also works with government to ensure adequate educational infrastructure, but where it is significantly lacking, the company may step in to help build and furnish classrooms and facilities. In the past year, the company has partnered to bring education to 65,000 children and has distributed 2,850 school kits.

Measured Impact:  Barry Callebaut continues to train farmers on child labor prevention and pilot programs with expert partners to develop a tailored approach to address the root cause of child labor in the chocolate supply chain. Thus far, 3.2% of the farmer groups that the company directly sources from have systems in place to prevent, monitor, and remediate child labor. Addition-ally, the company has identified and remediated 247 cases of worst forms of child labor. 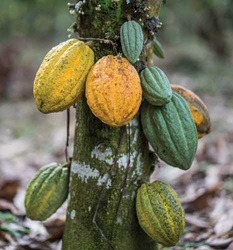 Be Carbon and Forest Positive
When a large chocolate manufacturer sets a goal to improve its environmental impact, it may seem like processing plants would be the natural place to start. And yes, instituting energy-saving policies at the plant level is important, but since deforestation is one of the biggest causes of global warming, it is vital to examine practices at the farm as well. As with child labor, poverty is often the culprit for farmers clearing forests to expand their cocoa farms and therefore increase their income. Through its farmer training programs, Barry Callebaut aims to help farmers increase their yields on less land and replace aging trees with structured replanting. Mapping of the farms will also help inhibit the deforestation practice, as it will allow for a clear demarcation of each farm’s boundaries.

At the United Nations Climate Change Conference that took place in November 2017, 12 of the world’s largest cocoa and chocolate companies committed to develop a cooperative, multi-stakeholder framework to end deforestation and forest degradation in the cocoa supply chain. As one of the 12 companies, Barry Callebaut agreed that no forest land would be converted for cocoa production and that there would be no direct sourcing from protected forest areas beginning January 2018. In addition, an action plan was created to remove cocoa farming from national parks and reserves and develop alternative livelihoods for cocoa farmers in protected forest areas.

To become carbon positive by 2025, Barry Callebaut has developed a roadmap to a carbon-positive way of manufacturing, and pilots have been defined for solar and wind energy, focusing on Africa, the United States, and Europe. The company is also looking at three other main renewable energy sources: energy from waste, energy from water, and renewable energy storage.

Measured Impact: Barry Callebaut’s carbon footprint—measured as carbon dioxide equivalent (CO2e) intensity per ton of average products—has decreased from 4.4 tons in 2014–2015 to 4.32 tons in 2016–2017. Additionally, the number of factories using only renewable electricity sources increased by seven to a total of 13 factories in 2016–2017.

100% Sustainable Ingredients
As mentioned previously, the Cocoa Horizons Foundation, set up by Barry Callebaut in 2015, enables farmers to enroll in its sustainability program. The HORIZONS cocoa that is produced from the farmers registered with the program is traceable from the warehouse all the way back to the individual farmer. The Katchilè app, developed in partnership with the German Investment and Development Organization, also enables Barry Callebaut to track a bean to the individual farmer through a combination of farmer registration, cocoa buying, processing, and transportation records. This high level of traceability means the company can assess the farmer’s and community’s needs so it can provide tailored support. 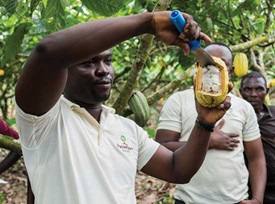 Barry Callebaut also sources a variety of other ingredients besides cocoa, including dairy products, sugar, palm oil, soy lecithin, hazelnuts, vanilla, and coconut oil. To sustainably source all of its ingredients, the company is working with industry platforms as well as engaging customers and suppliers for joint programs. This past year, Barry Callebaut joined Bonsucro—an international, multi-stakeholder organization that promotes sustainable sugar cane—and the Palm Oil Innovation Group— a multi-stakeholder initiative that strives to achieve the adoption of responsible palm oil production practices by key players in the supply chain. The company has been a member of the Roundtable on Sustainable Palm Oil since 2011, and aims to have 100% of its palm oil sustainably certified by 2020.

In partnership with the Food Animal Initiative and others, Barry Callebaut launched the VisionDairy project in late 2017 to develop a standard for sustainable dairy production. The goal of the project is to identify and demonstrate best practices in cow and calf welfare, support resilient and ethical business practices, and protect and enhance environmental performance.

Measured Impact: Barry Callebaut reports that 36% of its cocoa and 30% of its non-cocoa raw materials are now sustainably sourced.

Making of a Movement
The level of complexity involved in the cocoa supply chain—from the economic barriers, price fluctuations, and government mandates, to the cultural importance of cocoa and harvesting methods—is vast and differs in every country where the beans are grown. A sustainability strategy that may be easy to implement in Ghana, may not work at all in Cameroon. Given the intricacies of the cocoa supply chain, the Forever Chocolate targets may seem impossible to meet.

Could Barry Callebaut fall short of meeting its goals? Yes. But as CEO Antoine de Saint-Affrique says, “the biggest risk is not doing anything.” As he explains, “I’d rather be challenged for only reaching 90% than for not asking the question.” To meet the targets, or even come close, many people—governments, industry companies, consumers, NGOs—will need to get involved. “So, my call to all of you is, come and join the movement,” urges Saint-Affrique, and “help us make sustainable chocolate the norm by 2025.”

Some facts about the cocoa industry

Spreading the word about the groundbreaking work being done to enhance the sustainability, nutrition, safety, and accessibility of the global food supply is the responsibility of all members of the science of food profession. IFT member Richard D. Ludescher shares one way he has found to "influence the influencers" and encourages others to do the same.

After reading the Food Technology article “Can Science Delivery Zero Hunger?” you may be inspired to take a deeper dive on the topic of food security. Here is a curated list of resources to help you learn more and take action.

The challenges of hunger, food insecurity, and malnutrition have escalated in recent months, and experts suggest a full transformation of the AgriFood system is needed to reverse the trend.