Greenhouse gases, such as carbon dioxide (CO2), methane, and nitrous oxide, trap heat in the atmosphere and are the leading contributors to climate change and global warming. While agriculture in the United States accounts for about 9% of greenhouse gas emissions from livestock, soil management, rice cultivation, and burning of crops, the food sector may also play a role in mitigating these emissions by utilizing CO2 and methane as a feedstock to produce food.

For example, biotechnology company Calysta is using a natural fermentation method developed in Norway more than two decades ago to produce a nutrient-dense protein that doesn’t contain any animal-derived byproducts. The fermentation process is fueled by methane gas. So, instead of methane being released into the atmosphere, it can be used as energy to feed protein production.

The company is currently using the process to produce FeedKind protein—a family of alternative feed ingredients for fish, livestock, and pet nutrition products—but it may be possible in the not-so-distant future in which this process, or something similar, could produce human-grade protein.

In the meantime, the FeedKind protein is poised to impact feed ingredients for aquaculture. The United Nations projects that by 2030, aquaculture will be responsible for almost two-thirds of the fish consumed. With that comes an increase in the need for fish meal and fish oil—the most common feed used in aquaculture, which is made from wild-caught “forage” fish. With a third of the global fish harvest going to make fish meal and fish oil, some forage fish populations are threatened. This has implications for the entire food web since larger fish depend on them for food. A sustainable, non-animal derived feed would benefit the oceanic ecosystem while enabling the aquaculture industry to continue to grow. 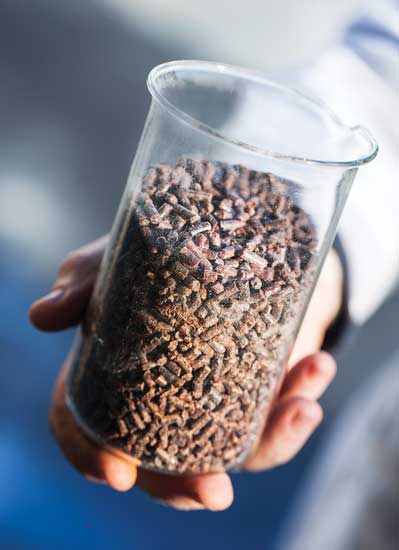 How is FeedKind made? “Gases are mixed in a proprietary fermenter, where they are consumed by Calysta’s natural microorganisms, and form the basis of the FeedKind protein,” explained Allan LeBlanc, senior director and FeedKind product manager. “The protein is then separated from the aqueous media in which it is grown, with water and nutrients returned to the fermenter.” It is then dried and turned into pellet or powder form.

“Methane is the source of carbon and energy for our fermentation process, in much the same way that sugar provides carbon and energy in wine fermentation,” noted LeBlanc. “The process can use any source of methane including biogas; however, it is difficult to find concentrated supplies of biogas in a single location to support a commercial-scale facility.” For now, the company will use natural gas from a pipeline at its $500 million Tennessee facility, which is expected to come online in 2019 and to produce up to 200,000 metric tons of protein per year when at full capacity.

Growing Algae with CO2
Researchers from the Univ. of Hawaii at Hilo, Cornell Univ., and Duke Univ. have proposed an unconventional mix of algae, eucalyptus and bioenergy with carbon capture and storage to provide food protein and electricity while removing CO2 from the atmosphere.

Detailed in a recent study “Integrating Algae with Bioenergy Carbon Capture and Storage (ABECCS) Increases Sustainability” published in Earth’s Future, the system combines a 2,680-hectare eucalyptus forest for bioenergy carbon capture and storage (BECCS) with a 121-hectare algae facility for algal biomass production. The eucalyptus biomass fuels combined heat and power (CHP) generation with subsequent amine-based carbon capture and storage (CCS). A portion of the captured CO2 is used for growing algae and the remainder is sequestered.

The ABECCS system yields as much protein as soybeans while generating 61.5 terajoules of electricity and sequestering 29,600 tons of CO2 per year. More energy is generated than consumed and the freshwater footprint is roughly equal to soybeans.

“Combining two technologies—bioenergy with carbon capture and storage, and microalgae production—may seem like an odd couple, but it could provide enough scientific synergy to help solve world hunger and at the same time reduce the level of greenhouse gases that are changing our climate system,” noted Charles Greene, Cornell professor and a co-author of the study.

IFTNEXT is made possible through the generous support of Ingredion, IFT’s Platinum Innovation Sponsor.