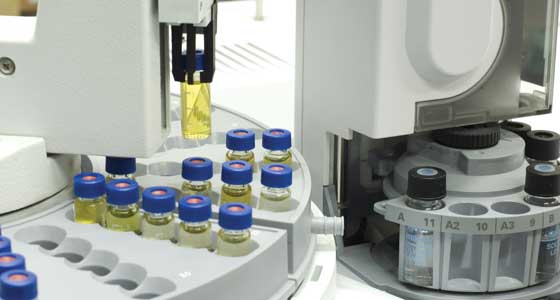 Metabolomics is the study of metabolites, which are small molecules that are produced during metabolism in living organisms, including plants, animals, and humans. Metabolites can be amino acids, lipids, sugars, phosphates, nitrogen-containing compounds, polyols, and other chemicals. Profiling an organism’s total metabolites, or metabolome, at any given time provides information about its health status and other criteria and can increase understanding of metabolic pathways and the effects of changes in the metabolome on disease and product characteristics.

Metabolomics involves the use of high-throughput assays and analytical techniques such as nuclear magnetic resonance (NMR) and liquid or gas chromatography linked with mass spectrometry in targeted and untargeted approaches. These techniques provide very large amounts of data, so sophisticated statistical methods are used for data analysis and interpretation and computerized libraries of mass spectra are used to help identify and compare metabolites within a system.

Metabolomics Applications
Metabolomics is used around the world in medical and pharmaceutical research and is also being applied to food, nutrition, and agriculture. Jessica Cooperstone, assistant professor at Ohio State University, and her colleagues are using metabolomics to understand which compounds in fruits and vegetables impart health benefits in humans. She said that metabolomics aims to profile the totality of chemical compounds present within a system, whether a plant, fruit, or vegetable, a processed food product, or a biological fluid. Hundreds or thousands of chemicals can be monitored simultaneously, and by using mass spectrometry or NMR spectroscopy, she and her team can determine the effect of perturbations on the system without prior knowledge of which compounds are altered. Metabolomics, she said, can be used to investigate how a food product changes with food processing, to detect adulteration or misbranding or changes in nutritional profile, to better understand what flavor compounds contribute to product liking, and to explore how dietary interventions with these food products alter the human metabolome. The data can also be correlated with other information, such as sensory evaluation data, genetic analyses, and microbiological data to provide additional value.

Cooperstone is primarily interested in understanding the factors that affect the biosynthesis of phytochemicals. By better characterizing plants, utilizing diverse plant germplasm and applying plant breeding approaches, she and other researchers can better design studies to understand how particular components of crops affect health. Cooperstone and her colleagues have used metabolomics to understand the effects of thermal processing of black raspberries and how different phytochemicals in the black raspberries are related to bioactivity in vitro. They have also used metabolomics to elucidate bioactive components from tomatoes in a model of non-melanoma skin cancer.

Devin Peterson, professor at Ohio State University, is adapting untargeted chemical profiling methods of discovery from the metabolomics field to advance understanding of flavor perception, referring to this application as “flavoromics.” His program focuses on identifying chemical stimuli (taste, aroma, and somatosensory effect) that impart flavor to foodstuffs, investigating multi-flavor interactions on perception, and mapping pathways of flavor generation/stability and mechanisms of flavor delivery. The characterization of compounds that drive flavor perception and reward provides a platform for the development of sustainable, nutritious, and healthy foods that have high product acceptability. People generally eat what they like, he said, and nutritious food and more sustainably sourced products have limited societal impact if the population, as a whole, does not consume them.

Modern methods of flavor characterization have relied on a targeted approach to identify flavor molecules by screening compounds individually (in isolation) or out of context (e.g., from the effluent at the end of a gas chromatographic column) for sensory activity, he said. Methods based on singular compound evaluation can overlook drivers of flavor perception by ignoring potential interactions among stimuli. To overcome this analytical limitation, he and his colleagues have utilized flavoromics to understand novel drivers of food flavor in wheat bread, orange juice, coffee, fruit, and other products.

Emmanuel Hatzakis, assistant professor at Ohio State University, is using NMR spectroscopy and metabolomics to study the composition and nutritional value of foods. He is working on the development of rapid analytical methodologies that can be used as effective and reliable tools for food quality control. This research is expected to generate new methods for analysis and food safety, he said, and help develop novel agronomic and processing methods for increasing the nutritional value of foods. For example, they can be used to quantify the impact of key processing unit operations on the composition of certain metabolites that appear in foods and possess important health benefits. He is also working to produce and characterize products and food ingredients with high commercial and nutritional value from raw foods and/or food wastes that are currently used as cheap feed components or disposed of (with an additional economic and environmental cost). The final goal, he said, will be to use these alternative value-added products or compounds as food supplements and/or to design personalized and selective nutritional therapies and health regimens. He is also investigating the interaction between nutrition and gut microbiota, specifically focusing on prebiotics and probiotics.

Carolyn Slupsky, professor at the University of California, Davis, is using NMR metabolomics to understand how food affects the human gut microbiome and ultimately human health by defining profiles of various foods and determining the effects that nutrients in these foods have on gut microbial function and host health. For example, she has studied the metabolomics of human milk and has identified several small-molecule components that may be important for infant health. She has shown that lactose is an important component of milk and that replacing lactose with maltodextrin in infant formula to create lactose-free formulas has a profound impact on infant metabolism. This work, she said, has important implications in the manufacture of infant formulas.

Slupsky is also studying the effect of plant pathogens on plant health, focusing on how the citrus greening disease Huanglongbing, caused by the pathogen Candidatus Liberibacter asiaticus, affects citrus metabolism. She is using metabolomics to determine biomarkers for early detection of the disease. Current methods for detection of the pathogen have low sensitivity even when the tree is symptomatic, she said, and her method is proving to have high sensitivity even at the pre-symptomatic stage. Given that this disease has decimated citrus production in Florida and is increasing in California, Slupsky said that fresh citrus production in the United States is at risk and her work could result in a test that could slow or stop progression of the disease.

John W. Newman, research chemist at the Western Human Nutrition Research Center of the U.S. Dept. of Agriculture’s Agricultural Research Service and associate adjunct professor at University of California, Davis, focuses on the use of targeted metabolomics to study lipids and mediators and enhance understanding of how food and nutrition can prevent and influence obesity and its adverse health effects. He has done a number of food-related projects using metabolomics, including studies on the U.S. Dietary Guidelines for Americans, vitamin status and metabolism, almonds and skin biology, fish oil and inflammation, and influence of olive oil varietals on blood pressure and platelet function. He said that different varieties of olives taste different and have different biological components that end up in the oil and the health benefits of olive oil may be partly dependent on the variety of olives used. Oils that are very spicy appear to have a stronger impact on platelet aggregation function, he said; the blood metabolomic profiles differ, and panelists’ platelet reaction to the oil could be predicted from their metabolic profile. Newman said that future projects will include building targeted metabolomics for use in unbiased diet pattern analysis.

Oliver Fiehn, professor at University of California, Davis, is using untargeted metabolomics to study the effect of flaxseed oil on microbes, specifically for understanding the effects of flaxseed consumption on circulating inflammation–related metabolic profiles in African-American and non-Hispanic white women. He is developing improved methods in analytical chemistry and bioinformatics to capture and utilize metabolomic data, to help understand which parts of larger biochemical networks respond to genetic perturbation or environmental stress. For example, he has used the new MassBank of North America repository, designed for efficient storage and querying of mass spectral records, to associate more than 160 polyphenols in red wines with taste sensory data. The repository, he said, provides free access to more than 260,000 mass spectra, including more than 50,000 mass spectra of flavonoids and natural products.

Jerrad F. Legako, assistant professor at Texas Tech University, is using metabolomics to help make better decisions about animal production practices and meat handling. He said that while the genetic makeup of animals in large part affects meat quality, specific metabolites can also directly influence quality. Flavor perception, he said, is driven by interactions of chemical compounds on the human tongue and by volatile compounds in the olfactory system. He is studying how metabolites such as volatile compounds developed through alterations of inherent components of meats contribute to flavor development. He is using gas chromatography and mass spectrometry in a semi-targeted approach, looking at previously identified compounds as key markers for flavor and looking for other compounds not previously targeted. He is specifically looking at metabolites that represent the end products of the Maillard reaction and lipid oxidation. Compounds such as sugars, amino acids, and fatty acids are precursors to volatile compounds and flavor, he said, and he has a working list of more than 70 volatile compounds representing lipid oxidation products such as aldehydes and ketones and some components of the Maillard reaction such as pyrazines.

Gale Strasburg, professor at Michigan State University, is using metabolomics to improve meat and poultry quality. He said that quality is affected by the animal’s genetic background and interactions with the environment that affect expression of those genes. Early exposure of newly hatched poultry to heat stress or cold stress can affect gene expression, which influences the growth and development of muscle, leading to problems such as altered fat deposition and altered muscle fiber type, and pre-market heat stress frequently results in pale, soft, exudative meat. Strasburg and his colleagues are using targeted and untargeted metabolomics to compare the metabolomic profile of turkey breast muscle samples exposed to normal temperature conditions to samples exposed to heat stress, looking for differences to better understand the mechanism of formation of the metabolites involved.

Ranjith Ramanathan, associate professor at Oklahoma State University, is using metabolomics to study the biochemical basis of meat color changes, specifically, the relationship between postmortem metabolite profile and beef color. The oxidation of myoglobin leads to brown color formation, he said, and postmortem muscle is biochemically active. Various studies have shown that glycolytic and tricarboxylic metabolites are critical to limit discoloration of meat, he said, and he is using metabolomics to study muscle-specific metabolite differences in economically important beef muscles and how mitochondrial function affects the bright red color of raw meat.

• Southeast Center for Integrated Metabolomics at University of Florida

• Resource Center for Stable Isotope-Resolved Metabolomics at University of Kentucky