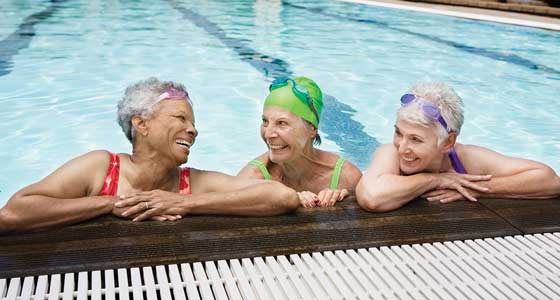 As consumers enter their golden or senior years, their focus turns to health. They want to maintain physical and mental fitness, avoid major diseases, and remain active and independent. But aging is associated with oxidative stress, inflammation, and chronic diseases. Recent research has shown that some food compounds may mitigate the effects of aging.

Dietary Fiber
Dietary fiber benefits digestive health, and now University of Illinois (U of I) researchers have added a new reason to consume it, perhaps particularly for older individuals. A study published in the journal Frontiers in Immunology found that dietary fiber helps to reduce damaging brain inflammation.

Brain inflammation occurs as mammals age, prompting immune cells called microglia to become chronically inflamed and causing them to produce chemicals known to negatively affect cognitive skills and motor function. Dietary fiber may help give brain health a boost because when it is digested in the gut, it produces butyrate, a short-chain fatty acid that has been shown to have anti-inflammatory properties on microglia and to improve memory in mice when it is administered in drug form, says Rodney Johnson, professor and head of the Dept. of Animal Sciences at the U of I and a corresponding author of the study.

The U of I scientists fed low- and high-fiber diets to groups of young and old mice and then measured the levels of butyrate and other short-chain fatty acids in their blood as well as inflammatory chemicals in the gut. The high-fiber diet elevated butyrate and other short-chain fatty acids in the blood for both groups. But the low-fiber diet produced intestinal inflammation only in the old mice, not the young ones. There was good news, however, when the old mice were fed a high-fiber diet: Their levels of intestinal inflammation were dramatically reduced—to the point where there was no difference in inflammation levels between the old and the young mice.

Quinoa
The fountain of youth may be embedded in quinoa seeds, according to a study published in the Journal of Functional Foods. Researchers at Rutgers University and North Carolina State University (NCSU) used an unusual animal model to determine whether phytonutrients found in quinoa seeds could slow the aging process.

“Quinoa contains all essential amino acids, [so] its protein is complete and particularly beneficial for those whose diets are low [in] animal protein,” says study co-author Slavko Komarnytsky, an associate professor at NCSU’s Plants for Human Health Institute. “Quinoa is unique in being one of the few foods high in dietary ecdysteroids that exert positive effects on metabolism and energy balance, especially on muscle, bone, and skin.”

Aging involves the decline of energy metabolism and mitochondrial function. Komarnytsky and his colleagues used an animal model that ages rapidly—C. elegans, a nematode worm—to determine whether quinoa leachate could slow the metabolic signs of aging that most mammals exhibit. Nematode worms “have a short lifespan, which is critical for aging studies,” notes Komarnytsky. After administering the quinoa leachate to the nematode worms, he and his colleagues saw improvements in lifespan, locomotor performance, and mitochondrial bioenergetics and reductions in the presence of advanced glycation end products, reactive oxygen species, and body fat.

Komarnytsky cautions that further preclinical and clinical studies are necessary to confirm the study’s findings. Another source of bioactive ecdysteroids is spinach.

Mushroom
According to researchers at Pennsylvania State University (Penn State), mushrooms contain high amounts of two compounds that may be able to improve health and deter the effects of aging by mitigating oxidative stress. Their work was published in the journal Food Chemistry.

Many scientists believe that oxidative stress contributes to the manifestation of age-related disease such as cancer, heart disease, and Alzheimer’s disease. The antioxidative nutrients glutathione and ergothioneine diminish oxidative stress but decline in humans as they age. “Glutathione is the major endogenous intracellular antioxidant in nearly all living organisms and tissues,” says John Richie, a professor of public health sciences and pharmacology at Penn State and one of the study’s authors. “It has numerous functions including protecting cells against oxidative stress, detoxification of toxins and carcinogens, regulation of proteins and maintenance of immune function. The maintenance of tissue levels of [glutathione] is critical for maintaining health, preventing diseases and age-related biological insults.” Glutathione is present in cruciferous vegetables and certain meats, but mushrooms contain the highest levels of this compound.

“Understanding that mushrooms are an important source for both ergothioneine and [glutathione] poises this food source as a likely important component for a healthy diet, one associated with optimal health and longevity,” Richie asserts.

Products and Services to Inform and Support Food Companies June 1, 2020