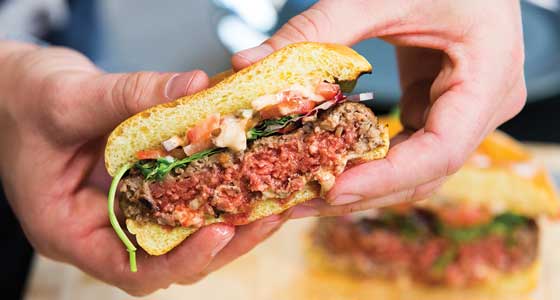 With a bloom of plant-based products that mimic sausage, bacon, ground meat, tuna, and more, the meat department in the supermarket is now the protein department, declared LuAnn Williams, co-founder at Innova Market Insights, speaking at a session at the IFT18 annual event last July in Chicago.

The purchase drivers for consumers’ choosing meat alternatives have shifted over the past 10 years, said Williams. Cholesterol and heart health issues have been eclipsed by animal welfare. Initially consumed by vegetarians, meat alternatives are a mainstay of flexitarian diets. Today, more consumers are turning to plant-based meats for health, product variety and novelty, and sustainability. It’s also a global phenomenon with consumers in China, Mexico, UK, Germany, and the United States saying they’re eating more meat substitutes and alternatives than they did the previous year, noted Williams.

Burgers dominate the meat alternatives market in the U.S., while soy protein is king in Asia. Pea protein has seen a 35% increase in new product launches in the past five years. Other plants on the rise in meat substitutes include pulses, beans (fava beans and mung beans), nuts, rice protein, and spent grains.

Burger 2.0
At the recent Consumers Electronics Show (CES) in Las Vegas in January, Redwood, Calif.-based Impossible Foods rolled out is Impossible Burger 2.0—a new-and-improved version of its disruptive plant-based hamburger that it launched in 2016.

Burger 2.0 has 40% less saturated fat (mainly due to a reduction in coconut oil and the addition of sunflower oil) and 30% less sodium than its predecessor. A 4-oz patty has 14 g of fat, 240 calories, and no cholesterol. In contrast, a similar serving of an 80% lean hamburger has about 80 mg of cholesterol, 23 g of fat, and 290 calories.

The new formulation features as much protein and iron as an 80% lean burger from a cow. Wheat protein has been removed and replaced with soy protein to make the new burger gluten-free. “We swapped the wheat protein for soy protein, [a] higher quality protein by PDCAAS (Protein Digestibility-Corrected Amino Acid Score) standards,” noted David Lipman, chief science officer at Impossible Foods. Burger 2.0 retains a key ingredient—heme—from the original product. Impossible Foods genetically engineers and ferments yeast to produce soy leghemoglobin, a heme protein found in plants. Soy leghemoglobin imparts a reddish pink color to the product and is responsible for the development of “meaty” and savory flavors when the product is cooked.

The original recipe was available only in burger form. According to the Silicon Valley-based company, the new formulation is as versatile as ground beef and can be shaped into meatballs, used as crumbles for taco meat, lasagna, and chili, and even served as steak tartare. It can be prepared with a variety of cooking methods—barbecue grilling, flat top grilling, sautéing, and steaming.

Sensory testing and optimizing taste were crucial elements of the product development process. “We ran over 10,000 taste tests and tested over 90 different Impossible Burger recipes,” stated Lipman. “In less than one year of intensive R&D, likability testing shows a dramatic drop in the number of people who didn’t like the Impossible Burger and a similar increase in the number who ‘Like It Very Much.’ Paired preference taste tests between the new and original recipes also indicate that the new was favored by more than twice as many consumers as the original.”

By mid-March, the new product is expected to be in nearly all 5,000 restaurants in the U.S. that serve Impossible Burgers. Foodservice establishments include fine dining, better burger joints like Umami Burger and Wahlburgers, and the White Castle chain. The Impossible Burger is also available in more than 100 restaurants in Hong Kong and Macau, and the company plans to introduce the new recipe in Singapore this year.

Impossible Foods also has plans to launch the new product at select grocery chains in the U.S. later this year. One potential stumbling block may be its leghemoglobin ingredient. Although the U.S. Food and Drug Administration (FDA) accepted soy leghemoglobin as GRAS (generally recognized as safe) in 2018, the agency will have to take another look at it for use as a color additive because the product will be sold raw at retail. Impossible Foods filed a petition with the FDA for its use as a color additive and is awaiting a response from the agency. 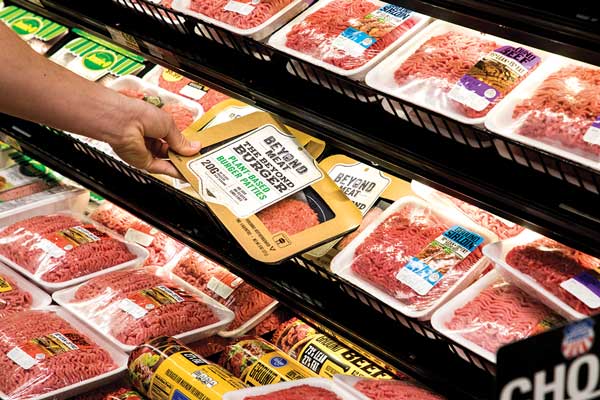 Beyond Meat
Last month, plant-based food pioneer Beyond Meat announced a partnership with Carl’s Jr. restaurant chain to sell its 100% plant-based patty in a new burger launch—the Beyond Famous Star. It will feature the new Beyond Burger 2.0 patty (with 20 g of protein from pea protein isolate) topped with American cheese, lettuce, tomato, sliced onions, dill pickles, and condiments on a seeded bun.

Although El Segundo, Calif.-based Beyond Meat has been selling its burgers at foodservice through A&W in Canada, TGI Fridays, Epic Burger, and Bareburger, the alliance with Carl’s Jr. expands its market footprint into the fast-food space and adds more than 1,000 locations to its foodservice distribution.

In addition to foodservice, Beyond Meat sells it burgers in the meat case at more than 12,000 grocery stores, including Whole Foods, Kroger, Safeway, and Albertsons. Additional plant-based products include sausage, chicken strips, and beef crumbles. Burgers represent the bulk of Beyond Meat’s sales, accounting for 71% of its gross revenues for the nine months ended September 29, 2018.

Last year, Beyond Meat commissioned a life cycle analysis (LCA) comparing the environmental impact of the Beyond Burger to a traditional beef burger. The peer-reviewed LCA study, conducted by The University of Michigan, found that the environmental impact of the production of the Beyond Burger had a significantly smaller ecological footprint than a regular beef burger. Compared to a 1⁄4-lb U.S. beef burger, producing a 1⁄4-lb Beyond Burger requires 99% less water, 93% less land, nearly 50% less energy, and generates 90% fewer greenhouse gas emissions.

Products and Services to Inform and Support Food Companies June 1, 2020