The microbial safety of food has always played the main role in any food processing environment worthy of its name. Currently taking center stage is the pathogen that needs no introduction, Listeria monocytogenes. Described as the world’s worst outbreak, in 2017 and 2018, consumption of a Listeria contaminated ready-to-eat meat product resulted in the deaths of 216 people and sickened more than 1,000 South Africans. Its looming and gloomy presence in the South African food chain has now brought to light what the food industry has known for years: getting rid of Listeria in a food processing environment is nearly impossible, ignoring it is futile, and managing it is a worthy challenge.

However, great advances in research regarding the survival ability and pathogenicity of L. monocytogenes are bringing us closer to finally understanding the survival ability of this pathogen. Through a symbiotic collaboration between academic research and the food industry, the successful and proactive management of L. monocytogenes in our food chain will become a reality—one that will ensure the delivery of safe food to all South African consumers.

Understanding the Pathogen
Listeria monocytogenes is a foodborne pathogen that has the ability to survive within a wide range of conditions found within food processing environments, its most important distinguishing factor being its ability to survive at refrigeration temperatures. It is the cause of a potentially life-threatening infection, listeriosis, which is of particular concern to pregnant women, immunocompromised individuals, children, and the elderly. As highlighted by the recent media attention as well as reports of an outbreak, its presence is of major concern within South Africa’s various food processing environments and food products.

With this in mind, a study, which started in 2016, was conducted by the Department of Food Science at Stellenbosch University in collaboration with South African food industry partners to study the survival and proliferation of L. monocytogenes in a processing environment—specifically, the response of L. monocytogenes biofilms to sanitizers used in factory hygiene programs. It is important when considering that the main mechanism of L. monocytogenes contamination is said to occur post production. The study had both academic and industry-applicable objectives. The industry objective was to assist the food factory in better understanding the Listeria spp. in-house flora and to make practical recommendations regarding sanitation practices aimed at successfully managing it.

Its academic objective was to contribute to the surge in Listeria food safety research as well as to create awareness about the complex, yet interesting, nature of the pathogen. It was hoped that this approach would begin to strengthen collaborative efforts between the food science department and food industry partners to increase the relevance, impact, and applicability of food safety academic research.

Post-production contamination of food is a major food safety risk because carefully prepared foods can still be re-contaminated during handling and storage. These contamination mechanisms include contaminated food contact surfaces (FCS) as well as other non-food contact surfaces (NFCS) such as machinery and processing equipment, which could harbor biofilms. Cleaning and sanitation protocols form an important part of Listeria control plans; however, they approach every harborage site and niche in a similar manner. Microbes know that there is safety in numbers and therefore form microbial communities or biofilms in response to their environment.

Considering that the response and recovery ability of bacteria within a biofilm can fluctuate due to their relationship and position in the microbial community, the response of a drain biofilm to sanitation efforts would differ from a biofilm found on machinery or FCS. One would therefore expect biofilms formed in drains and flow environments such as pipes to respond differently to sanitizers than biofilms formed on work surfaces. Biofilms mature when they are not subjected to either mechanical removal or chemical bactericidal treatment. Due to possible lower sanitation frequencies, drains are excellent harborage sites for matured biofilms. Increased resistance to sanitation is found in matured biofilms, with a response that counteracts sanitation efforts.

Many studies have attempted to define the factors that contribute to the persistence ability of L. monocytogenes and, although definite parameters have not yet been identified, harborage sites have been identified as a major driving force of persistence. This adds to the need to study the response of biofilms that have matured under flow conditions mimicking harborage sites that facilitate persistence. The response of L. monocytogenes biofilms, cultivated under flow conditions, to sanitizers used in the factory environment was therefore evaluated. 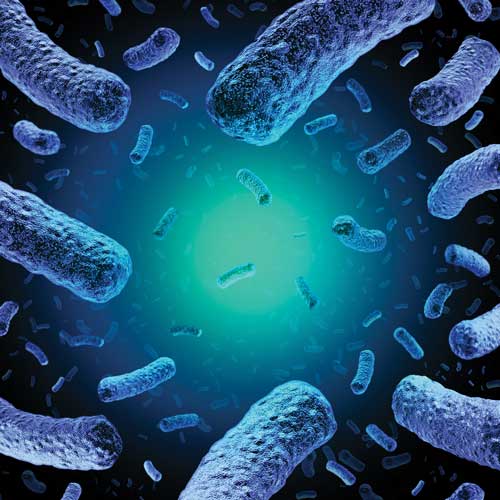 Response to Sanitizers
In collaboration with the Department of Microbiology at Stellenbosch University, L. monocytogenes biofilms were studied using the CO₂ evolution measurement system (CEMS). CEMS is a novel, non-destructive, non-invasive method of studying mature biofilm response under flow conditions. It is a once-through flow system that, in essence, evaluates biofilm metabolism by measuring CO₂ produced by the bacteria during respiration. The response of a biofilm is measured as a decrease or increase in CO₂ production. Resistance would be defined as an increase in CO₂ production after a bactericidal treatment. This would be indicative of a recovery effort and resuscitation of injured cells. Sanitizer treatment and the subsequent response of the biofilm in CEMS system is an excellent demonstration of how a single biofilm builds up resistance against a sanitizer in a matter of hours.

A protocol was developed using the CEMS to evaluate the effect of four sanitizers used by a food factory on L. monocytogenes biofilms. In a novel approach, it was found that, even though no bactericidal effect occurred by either sanitizer, the quaternary ammonium compound (QAC)-free sanitizer resulted in the best eradication of the biofilm. Peracetic acid and QAC-based chemicals had no effect on the biofilm, as recovery of L. monocytogenes was observed after multiple treatments and increase in resistance was seen within hours. Since the cells flowing out of the system after treatment were still viable and culturable, it could be concluded that the sanitizers merely loosened the biofilms. In a food processing environment this would mean that the biofilm would be able to re-attach in a different area and continue growing. This is a mechanism that could drive proliferation of L. monocytogenes and, since it was exposed to sub-lethal treatments, the proliferation of a more resistant L. monocytogenes. The factory was advised to use QAC-free chemical sanitizers currently available to manage biofilms, specifically in drains. This addition will further improve the environment to product hurdles, since no ribotyped environmental strains were found in final food products.

Through collaboration and open, honest communication between academic research, food industry stakeholders and the relevant government agencies, progress can be made in proactively managing L. monocytogenes in the South African food chain before the final curtain call, because “Messieurs, c’est les microbes qui auront le dernier mot” (Gentlemen, it is the microbes that will have the last word —Louis Pasteur).