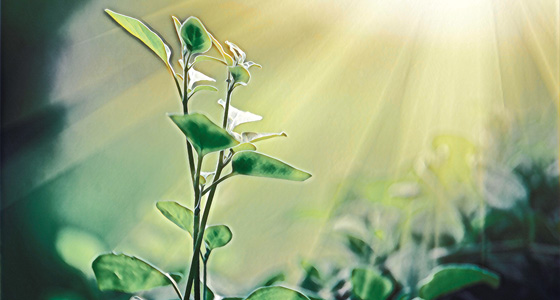 For years, a global team, funded in part by the Bill & Melinda Gates Foundation, has been working to improve crop production by engineering plants to photosynthesize more efficiently. Now, as part of the RIPE (Realizing Increased Photosynthetic Efficiency) project, a group of internatiional scientists has determined that it’s possible to quickly and efficiently measure the impact of genetically engineered improvements using a process called spectral analysis.

Here’s how it works. Humans generally see three colors or spectral bands, explained RIPE research leader Carl Bernacchi, a scientist with the U.S. Department of Agriculture, Agricultural Research Service, based at the University of Illinois. Sensors, however, make it possible to see hundreds of spectral bands, including many not visible to the human eye.

“Hidden in many of these bands is critical information that can help make crops more productive,” said Bernacchi. “Spectral analysis is the means by which we measure these hundreds of bands and investigate what each band is—or combinations of bands are—telling us about the plant.” The beauty of this approach, which measures light reflected from plants’ leaves in order to predict photosynthetic capacity, is that it is less expensive and much faster than conventional measurement techniques (10 seconds versus up to 30 minutes).

“The question we set out to answer is, ‘Can we apply spectral techniques to predict photosynthetic capacity when we have genetically altered the photosynthetic machinery?’” Bernacchi noted. “To test this, we grew a range of tobacco plots with natural variation or with genetic modification for higher or lower photosynthesis. We performed the spectral analysis while also making the traditional slow and expensive measurements. Through the analysis of the spectral measurements, using machine learning approaches that use advanced statistical analysis, coupled with the ‘tried and true’ slow measurements, we found that genetically modified plants contain information related to their photosynthetic capabilities hidden in the spectral bands.”

The researchers are currently working with tobacco, Bernacchi said, because it is a great “model crop” species. “Our goal, of course, is not to create better tobacco,” he continued. “But because tobacco is easy to work with, it allows us to test what works before we apply it to food crops that are typically more difficult and time-consuming to genetically modify.” Ultimately, he said, the researchers seek “to extend these improvements to the plants we actually need to improve to benefit human nutrition.”

Cyanobacteria and CO2
Microscopic bacteria in lakes and streams may hold the key to improving the growth and yield of crops, thereby helping feed a growing population sustainably. These bacteria—cyanobacteria—are unique because they contain tiny compartments called carboxysomes, which make them very efficient at transforming carbon dioxide into energy-rich sugars. Unfortunately, in crops such as wheat, cowpeas, cassava, and soybeans, the enzyme responsible for fixing carbon dioxide from the atmosphere—called rubisco—is slow and finds it difficult to differentiate between carbon dioxide and oxygen, leading to wasteful energy loss.

“Our aim is to transfer what’s called the ‘CO2 concentrating mechanism’ from cyanobacteria to plants to help them capture CO2 more rapidly and efficiently,” explained Ben Long, research fellow at the Australian National University’s Research School of Biology. He compares this mechanism—which happens in two parts—to a turbo engine for photosynthesis.

“One part is a fuel-injecting ‘bicarbonate transport system,’ which pumps a dissolved form of CO2 called bicarbonate into cyanobacterial cells,” stated Long. Other members of the research team are focused on that part, while Long’s team is focused on the “tiny engine”—the carboxysome.

“It’s a complex arrangement of proteins that form an icosahedral structure (like a 20-sided dice) stuffed with the CO2-capturing enzyme rubisco. This engine is a very difficult part of the mechanism to reproduce in plants, but this is where our most recent advances have come,” noted Long.

Using tobacco plants, because they are simple to modify genetically, easy to grow, and form a dense crop canopy like many other crops, Long’s team has been successful in generating simple carboxysomes inside the chloroplasts of the plants. “This is the first time this has been done and it is now the framework, or engine block, from which we can build and refine the remaining components of the turbo engine,” stated Long.