Numerous researchers in academia are developing biosensors for detection of pathogenic and spoilage bacteria. Here are a few profiles of research teams that are working on biosensing technologies.

University of Wisconsin–Madison
Professor Sundaram Gunasekaran and his colleagues at the University of Wisconsin–Madison are developing a biosensor that uses color-changing gold nanoparticles to provide rapid and highly sensitive visible detection of bacteria without requiring a readout device. At nanoscale, Gunasekaran said, gold exhibits a brilliant range of colors, which are markedly different than the golden color of bulk gold. This is due to a phenomenon known as localized surface plasmon resonance (LSPR). LSPR is the collective oscillation of electrons in nanoparticles, which is driven by the oscillating electric field of the incident light. The color of the nanoparticles can be easily tuned by shifting the LSPR. This occurs when nanoparticles come close enough together to interact, as when they aggregate, for example. The shift in LSPR through nanoparticle aggregation causes a visible color change that can serve as an effective transduction mechanism.

Other biosensors have employed colorimetric signal generation via aggregation of nanoparticles, Gunasekaran said, but the level of detection has been low. He has focused on amplifying the signal to improve the level of detection by controlling the extent of aggregation, which must exceed a certain minimum threshold to produce a visible change. His signal-amplification strategy involves using bifunctional, or switchable, linkers that are designed to lose their function to crosslink nanoparticles in the presence of the target bacteria and thereby control the extent of aggregation. While the linkers can both bind to the target and crosslink the nanoparticles, their crosslinking function is essentially disabled when they bind to the target bacteria. Gunasekaran used streptavidin-functionalized gold nanoparticles and biotinylated antibodies against Escherichia coli as the bifunctional linker. By varying the amount and size of nanoparticles used, he said, he and his colleagues were able to tailor the assay effectiveness, improving the limit of detection down to 10 colony forming units (CFU)/mL of E. coli. Gunasekaran said that the biosensor performed well in tap and lake water and milk samples and is unaffected by the medium. It detects only live cells. Since no sample preprocessing is required, the total assay time is about 30 minutes when the sample is gently agitated or about three hours under quiescent conditions. The biosensor has also worked well to detect Salmonella on whole tomatoes, he added. The immunoassay was rapid and simple and had a low detection limit for in-field, rather than laboratory, analysis.

Gunasekaran said that no specialized equipment is needed; the test system is generally a set of vials. A potential test kit would be in the form of a tube divided by a pull tab. The user would add the sample to the tube, shake well, pull the tab, shake well again, then wait and watch for the color change. The test can detect about 10 cells per 100 mL in about 10 minutes.

Cornell University
Associate professor Sam R. Nugen and his colleagues at Cornell University have developed a bacteriophage-based membrane filtration assay that rapidly and quantitatively detects bacteria in drinking water, process water, and irrigation water. It uses a mixture, or cocktail, of bacteriophages genetically engineered to recognize and detect their host cells. The bacteriophages are engineered to carry genes for a reporter enzyme which is expressed during infection and detects bioluminescence if the host cell is present in the sample.

The researchers have initially designed the biosensor to detect the presence of E. coli as an indicator organism in water. Millions of people around the world lack access to consistently clean sources of potable water, Nugen said, and pathogenic E. coli is a common drinking-water contaminant. A limit of zero CFU of generic E. coli in 100 mL of water has been set by the U.S. Environmental Protection Agency (EPA) for drinking water and by the U.S. Food and Drug Administration for postharvest produce rinse water. The EPA’s drinking-water assay method 1604 uses a membrane filtration step to remove bacteria from the water sample prior to enrichment on selective and differential media. The bacteria CFUs are quantified directly on the filter following enrichment for 24 hours. There is a need to more rapidly detect and quantify E. coli in water samples while maintaining high sensitivity and quantification, Nugen said, and the biosensor is designed to both concentrate the E. coli cells and detect a single viable CFU of E. coli from 100 mL of water within three hours, allowing indication of fecal contamination in potable water prior to use.

The biosensor uses a luciferase and an alkaline phosphatase specifically engineered for increased enzymatic activity as reporter probes. Their genes were fused to genes for carbohydrate-binding modules specific to cellulose, and the resulting modules were inserted into the E. coli-specific bacteriophage T7, which was used to infect and lyse E. coli trapped on a cellulose filter. The reporters are released from the bacterial cells and immobilized on the cellulose filter in proximity to the lysed cells, thus limiting diffusion across the filter and allowing the colonies to be counted easily. After the addition of a bioluminescent or colorimetric substrate onto the filter, the location and quantification of E. coli cells could be determined visually (via alkaline phosphatase) or by bioluminescence imaging (via luciferase). Since phages exist for almost all bacteria, Nugen said, the assay can be modified for other pathogens and indicators in beverages and other liquids. The test is being adapted to work with rinse water and irrigation water for produce.

To use the assay, a water sample is passed through the cellulose filter, capturing the bacteria. The filter is then placed on media and incubated to form colonies, after which the bacteriophages are added to recognize and lyse the bacterial cells and express the reporters. Addition of substrate onto the filter provides a colorimetric or bioluminescent signal, depending on the reporter used. With regard to food and water, Nugen said, the major and often overlooked challenge is sample concentration. Regulations often require a relatively large sample size such as 100 mL for water or 25 g for many foods. Therefore, miniaturization of a device is not always the answer. Additionally, the low allowable number of bacteria as well as the inclusion of injured cells often means that a recovery period/pre-incubation is required. Unfortunately, this limits the speed of biosensor assays. There is often a tradeoff between sensitivity and speed, he said.

Nugen is working with a company on the development and commercialization of the assay. The company is currently conducting field trials in sub-Saharan Africa, and the results will reveal its usability and durability and whether the cocktail of phages being used has a wide enough coverage for the local strains of E. coli. The purpose of the field trials, he said, is to provide a realistic test case that will reveal problems that might not otherwise arise in a laboratory setting. He added that manufacturing and any other concerns brought up by the field trials would need to be addressed before commercialization.

Clarkson University
Professor Silvana Andreescu and her research group at Clarkson University are focused on designing devices that are inexpensive and easy-to-use and have the required detection sensitivity and selectivity for routine applications. Examples of their research projects include field tests that change color within minutes when exposed to toxic chemicals, allowing testers to immediately detect the presence of harmful contaminants in food and environmental samples; microelectrodes which allow the study of single molecules and measure physiological biomarkers; and electrochemical investigation of engineered nanoparticles and their interactions.

Andreescu’s laboratory has developed an inexpensive biosensor that can detect food spoilage, particularly in fish and seafood. The biosensor is engineered by coupling nanostructured surfaces with biomolecular recognition that specifically recognizes and generates a sensitive and direct measurement of spoilage markers. The biosensors are printed on paper by a BioDot aspirator/dispenser or are fabricated as standalone 3D-printed constructs that change color if food degrades. The sensors look like tiny dots that can be taped or otherwise incorporated inside packaging and provide a “fresh” or “not fresh” signal. They can be used as a smart label that is indicative of the quality of the product at the time of use and be used instead of, or together with, the use-by date label. 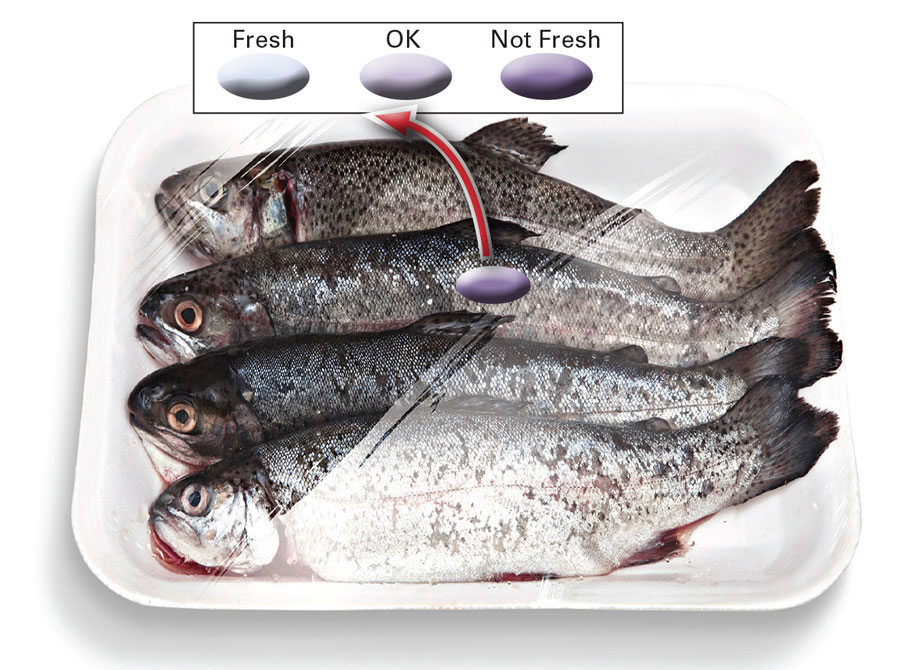 The biosensor utilizes enzymes immobilized within hydrogels or on paper surfaces containing redox-active nanostructures, Andreescu said. It detects a change in degradation markers such as hypoxanthine or biogenic amines, which are released when food degrades. Once released from food, these markers react with the immobilized enzyme, generating a product that reacts in contact with the active site of the nanostructure. These nanostructures are made of high-surface-area oxides and are designed to interact with and respond to the product of the enzymatic reaction, changing optical or electrical properties. By measuring these changes, she said, they are able to tell the amount of degradation marker released, which can ultimately be used to provide a freshness status.

Incorporation of the biosensor in food packaging to provide a measure of food quality has been the main motivation for this project, Andreescu said. The biosensor can be placed within a package and can indicate the status of food in terms of freshness, composition, or storage conditions, enabling direct communication with consumers, traders, or farmers. For each product, the biosensor can provide a freshness index related to the composition of the sample. The potential implementation in smart packaging could facilitate direct monitoring of food status and safety and, in the long run, extend shelf life and potentially reduce food waste, which would provide direct economic benefits.

There are commercial sensors that do similar things, she said, but most of them either are time-temperature indicators or produce a colorimetric change based on how long the package has been open. Several smart labels have been reported in the scientific literature that measure volatile markers such as total volatile basic nitrogen, but to Andreescu’s knowledge, there are no printable biosensors with incorporated biomolecules that can provide a specific and selective response and direct compositional/freshness information through smart packaging.

Andreescu and Clarkson graduate student Fatima Mustafa have performed initial testing on food products and have also developed procedures that enable large-scale manufacturing of these biosensors. They are not yet working with any companies to commercialize the biosensor but are looking for collaborations with food industries, packaging experts, and commercial entities to conduct large-scale testing and validation of the technology and to explore marketing and commercialization avenues.

They are still working to develop the best engineering design to incorporate the biosensors within packaging and to evaluate the manufacturing and deployment costs of these biosensors, Andreescu said. They are also developing, based on this platform technology, biosensors for additional biochemical markers, adulterants, and toxicants to further extend the applicability of this technology to food safety. She said that she and her team would like to build databases of freshness indicators and interface these with cellphone apps and enable connectivity with the Internet of Things (IoT) by adding a means of electronic readout and data transmission, such as an IoT biosensor for food freshness.

A challenge ahead with regard to biosensors, Andreescu said, is to develop improved methods to ensure their long-term stability when deployed, during transportation and storage, and on supermarket and consumers’ shelves. Another challenge is validation and regulatory approval of these biosensors.

Unravelling the relationship between aroma compounds and consumer acceptance: Coffee as an example July 7, 2020