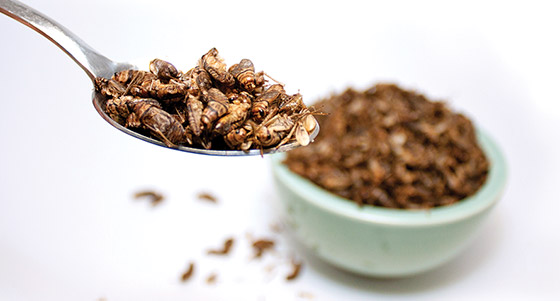 “Edible insects are fascinating, because although humans have consumed insects throughout history, and approximately 2 billion people around the globe regularly consume them today, research on the subject is relatively new,” says Valerie Stull, lead author of a study published in Scientific Reports that examines the effects of eating crickets on the human microbiome.

“Like many edible insects, crickets are considered an environmentally friendly protein source,” says Stull. “They require significantly less feed, land, and water to survive and thrive than traditional livestock, while also emitting fewer greenhouse gases.” The species Gryllodes sigillatus, which was used in Stull’s study, is also high in protein and a good source of fiber.

Stull and her colleagues at the University of Wisconsin–Madison set up a double-blind, randomized, crossover clinical trial to evaluate the effects of consuming 25 g of whole cricket powder per day. “We aimed to do three things,” she explains. “Confirm that cricket consumption is safe and tolerable, see if eating edible crickets influences human health directly by changing lipid metabolism or markers of inflammation, and assesses if cricket fibers, such as chitin—the primary component of the exoskeleton—could be prebiotics.”

A total of 20 healthy adults participated in the six-week dietary intervention. Participants were randomized into two study arms and consumed either cricket-containing or control breakfast foods for 14 days, followed by a washout period and assignment to the opposite treatment. Blood and stool samples were collected at baseline and after each treatment period to assess changes in blood chemistry, liver function, and shifts in microbiota.

Following the study, the researchers saw no signs of toxicity or intolerability for participants after eating crickets. No changes in lipid metabolism were observed, but there was a slight increase in alkaline phosphatase and a decrease in circulating pro-inflammatory cytokine TNF-alpha with cricket consumption. “These results are suggestive of an improvement in intestinal homeostasis,” says Stull, “meaning that eating crickets may improve gut health and reduce systemic inflammation; however, more research is needed to understand these effects and underlying mechanisms.

“We also observed several changes in microbiota after eating cricket powder, including a prebiotic effect,” she adds. Specifically, the researchers measured a significant increase in Bifidobacterium animalis, a probiotic known to inhibit pathogens, improve gastrointestinal function, and protect against diarrhea and foodborne pathogens.

Stull believes the study speaks to the potential health benefits of insect consumption, but advises that additional research is warranted, with larger sample sizes and an evaluation of the impact of cricket consumption on gut microbiota as well as the potential risks from eating insects.

Edible insects are touted as an excellent source of animal protein that does not adversely impact Earth’s resources. New research indicates that they may also be good sources of antioxidants. Published in Frontiers in Nutrition, a study by a group of scientists in Italy determined that the antioxidant levels of various edible insects and invertebrates is surprisingly high.

The researchers believe their findings reveal the potential of using grasshoppers, silkworms, and crickets to develop novel functional food products. However, the bioavailability and efficacy of insect-derived antioxidants when consumed by humans is not yet known, so more research is necessary.