When Atanu Biswas was growing up in Calcutta, his parents made his future options clear. “In the United States, you hear ‘be what you want to be,’” he says. But in India, opportunities are scarcer. You get a different message, he explains. “Be what you want to be,” just as long as “you become a doctor, or engineer, or scientist.” Biswas dreamt of majoring in art or music, but he abided by his parents’ wishes, eventually coming to the United States to earn a PhD in chemistry from the University of Notre Dame in 1985. Yet through his research, he’s managed to put his scientific degree to creative use: taking foods and leftover crops and experimenting with ways to turn them into sustainable alternatives to plastic. While sustainability is a complicated goal to reach, it’s one that Biswas is happy to be working toward.

After completing his postdoctoral research, Biswas spent the first decade and a half of his professional life working with synthetic polymers. Polymers are substances made of incredibly large molecules consisting of repeating sets of simpler chemical units. In more practical terms, polymers can be manipulated in ways that are very useful to the food industry, with many commercial applications. Some bend or stretch; others form extremely durable epoxies.

Yet synthetic polymers like polystyrene and polyethylene have a downside: their damaging effect on the environment. “These are plastics derived from petroleum,” explains Biswas. “It would be nice to have something which can disintegrate in nature,” he thought.

Over the years, with high oil prices impacting the cost of traditional plastics, and certain crops like soy, corn, and sugarcane being relatively cheap to grow, there came to be an increased demand for replacing synthetic polymers with biopolymers, or polymers made from natural materials grown in abundance, like soy.

In 2004, the U.S. Department of Agriculture (USDA) offered Biswas a new opportunity to experiment with natural materials. “My job is to dabble with all these biopolymers,” Biswas says of his work as a chemist with the USDA’s Agricultural Research Service in Peoria, Ill.

"My job is to dabble with all these biopolymers." 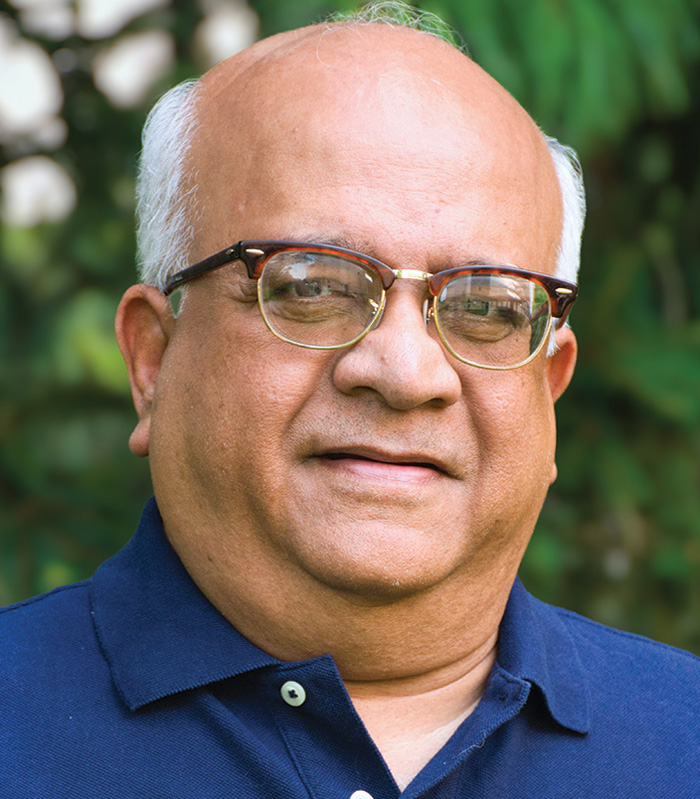 It’s a complex area of research, however, as not all biobased materials degrade in landfill. Some do biodegrade, while others need to be industrially composted in order to break down. “Ideally, you like to just put it in [the] landfill, and it disappears. But ‘ideally’ hasn’t been reached yet,” he says. Still, that’s the goal: “We are continuously trying to improve.”

A key part of Biswas’ research involves using microwave reactors, the energy from which he applies to a wide range of natural materials so they can replace harsher or less biodegradable options. Microwave reactors have played a large role in Biswas’ research over the past 15 years. He uses microwave energy to rapidly alter the structure of raw materials so they can be used in commercial applications in place of synthetic polymers.

Modifying and manipulating natural materials in this way is part of a broader movement in chemistry known as “green chemistry,” says Pradip Bhowmik, a chemistry professor at the University of Las Vegas who has collaborated with Biswas. “Our landfills are completely filled with plastic,” says Bhowmik, and Biswas’ work with biobased materials could help offer an alternative to plastics that can’t biodegrade or be recycled. “This whole new approach is working to address environmental pollution,” Bhowmik continues.

In 2015, Biswas was awarded the Science Without Borders prize of $150,000 to study biobased packaging with the Enterprise for Agricultural Research in Brazil, working with sugarcane, starches, and cashew nuts. By adding gelatin to a polysaccharide from cashew gum, the starch can become sturdy enough to use as food packaging. Yet the research has its obstacles. Biobased polymers need to be durable enough to hold up through the supply chain, says Biswas, and that durability doesn’t always lend itself to biodegradability. “This is a big challenge,” he says.

Biswas has also used microwave reactors to transform natural ingredients into sealants, medicine tablets, and packaging. Using microwave reactors can in some cases yield environmental benefits. “The actual production is much cleaner,” says Biswas. Sometimes there’s a pronounced effect from the reactor that’s unexplainable, something called “the microwave effect,” which Biswas uses to his advantage. “When you heat, you have a lot of byproducts and you have to purify, but with the microwave you don’t have to purify to get a very clean product,” he explains. It’s also far more efficient, speeding up the reaction time to hours or minutes instead of days.

In another set of experiments, findings from which were published in the June 2019 issue of LWT - Food Science and Technology, Biswas and his team tested ways to extract dietary fiber from overripe bananas, leaving excess sugar behind. His team used natural solvents rather than harsher ingredients like ethanol, resulting in a cleaner process. Biswas has also used microwave extraction methods to pull out healthful phytochemicals from beans and pulses.

Sometimes Biswas employs technology to analyze foods and crops, not just change their structure. In a collaboration with Clifford Hall, a food science professor at South Dakota State University, the team set out to discover the ideal environment for storing pulses like peas, kidney beans, and chickpeas, crops that are essential sources of nutrition in many countries. Hall says Biswas used nuclear magnetic resonance scans to help the team zero in on the right temperature and humidity to best preserve phytochemicals, amino acids, and protein levels in pulses stored for months or years at a time. “We can do a lot of the functionality tests, but he’s there to really go a little bit deeper into the chemistry of the changes,” explains Hall.

Despite his contributions to food science, Biswas never completely abandoned his dream to create art. Over the years, his original photography and graphic design has accompanied many of his scientific publications and projects. In late November, he was plotting out a photo shoot to feature some of the pulses he studied with Hall. “The pulses are very colorful,” he says with excitement. “They have different shapes and sizes.” It’s clear art is still a source of inspiration: “I enjoy art,” he says with a smile.