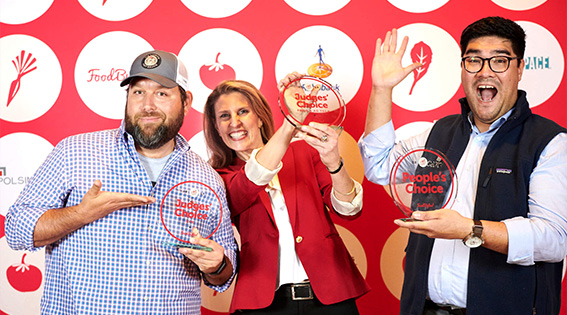 Three innovative food startups seized the spotlight in Chicago last week, clinching top honors in the 16th FoodBytes! pitch competition presented by Rabobank. The winners included a maker of artisanal Mexican sauces and snacks; the developer of a closed-loop system for raising salmon; and the inventor of a fermentation process for upcycling dairy waste.

“All of the startups we watched at FoodBytes! Chicago showcased some of the most innovative solutions we have seen yet when it comes to building a more nutritious and sustainable food supply,” said Darren Streiler, investment director, ADM Ventures, who served as a judge on the panel. “The key trends that emerged among our pool of applicants this year centered on plant-based and functional foods, climate-resistant crops, food waste and precision agriculture.”

Global food and agriculture bank Rabobank launched FoodBytes! in 2015. Since then 280 startups have pitched in 16 competitions held around the globe.

In Chicago, other participants in the ag tech segment of the competition included Agremo, developer of cloud-based agriculture sensing and imagery software for growers and agronomists; SeedLinked, which uses crowd-sourced data and advanced analytics to enable plant growers to choose, breed, and sell specialty seeds; and Cytophage Technologies, which develops synthetic bacteriophage products to prevent and treat bacterial infections in livestock.

Applicants for the FoodBytes! Chicago event came from 18 countries. According to the organizers, many of the startup applicants were clustered in the area of food as medicine and novel ingredients. About two-thirds of the CPG applicants claimed a functional benefit for their products.

A quarter of the finalists were focused on sustainable agricultures, 40% developed unique health foods and ingredients, and 20% were involved in food supply chain advances.

U.S. Secretary of Agriculture Sonny Perdue and United States Trade Representative (USTR) Robert Lighthizer have announced that China has taken actions to begin implementing its agriculture-related commitments under the U.S.–China Phase One Economic and Trade Agreement on schedule.

U.S. Secretary of Agriculture Sonny Perdue has announced that, effective immediately, U.S. wheat may now be shipped to Kenya regardless of the state of origin or port of export.

According to the Associated Press, the U.S. government has decided to allow raw beef products to be imported into the country from Brazil.

Equinom, a seed breeding startup, has closed its Series B round of funding of $10 million, led by BASF Venture Capital, Roquette, and Trendlines Group.

According to Reuters, British producers will not be able to export processed meat like sausages and burgers to Europe after Brexit unless they get a specific European Union (EU) health certificate.

Food Science for the Non-Food Scientist

Rich in industry news and highlights, the Weekly Newsletter delivers the goods in to your inbox every Wednesday.