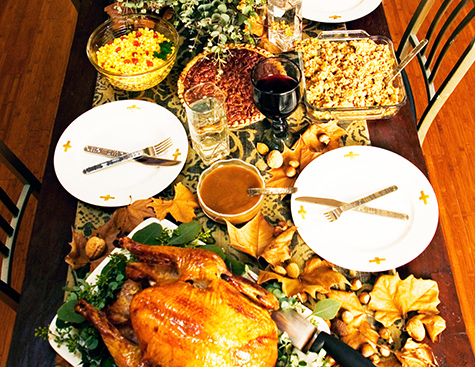 The holiday season will be here before we know it, which means preparing for yummy feasting, the gathering of friends and family and shopping for all the food. Turkeys, hams, homemade salads and fruity desserts are all waiting to be whipped up and consumed.

But along with popularity of preparing holiday food at home comes the threat of food illnesses. According to the Centers for Disease Control and Prevention, more than 200 known diseases are transmitted through food, and foodborne diseases are estimated to cause up to 9,000 deaths each year in the United States.

To prevent foodborne diseases from ruining your Thanksgiving or Christmas holidays, keep in mind the following tips from the IFT:

"These simple food safety steps, clean-separate-cook-chill, will assure that you and your guests have an enjoyable and memorable holiday," Clemens says.

CRISPR is a defining feature of the bacterial genetic code and its immune system, functioning as a defense system that bacteria use to protect themselves against attacks from viruses. The acronym “CRISPR” stands for Clustered Regularly Interspaced Short Palindromic Repeats.

About Food Science and Technology January 1, 2019

Biotechnology, Genetic Engineering, and “GMOs:” Why all the Controversy? September 12, 2018

Biotechnology, and the newer methods of genetic modification—genetic engineering and recombinant (r) deoxyribonucleic acid (DNA) techniques and technologies can be very useful in pursuing important improvements in food production and the food supply and doing so much more readily and effectively than previously possible.

The Potential of Blockchain Technology Application in the Food System February 22, 2018

The popularity of Bitcoin and other blockchain technologies reached new heights in 2017. Bitcoin is the most prominent in a new type of currency, called cryptocurrency, where transactions are made without an established intermediary (i.e. banks).

Join us to celebrate the Global Food System Challenge Growth Grant Winners. Representatives from Food Systems for the Future (FSF Institute), iDE Global, and the African Center for Technology Studies discuss their work and the role that the generous funding from Seeding The Future Foundation plays in helping to make healthier diets more accessible and empowers consumers to make choices benefitting both personal and planetary health.

Join us to celebrate the Global Food System Challenge Grand Prize Winners. Representatives from the International Rice Research Institute, Solar Freeze, and WorldFish discuss their work and the role that the generous funding from Seeding The Future Foundation plays in helping to make healthier diets more accessible and empowers consumers to make choices benefitting both personal and planetary health.