An innovative company dedicated to improving food safety through the development of an environmentally friendly, postharvest wash solution, En Solución was among five emerging, investment-ready startups to pitch their innovations to a panel of six judges as part of the IFTNEXT Food Disruption Challenge™ competition at IFT19 in New Orleans.

Currently, packaged salad producers use extreme concentrations of chlorine in a postharvest wash to eliminate pathogens. Harmer explained this process is harmful to workers and the environment, and still doesn’t kill all pathogens. The solution, he proposed, is the patent-pending technology his company invented, which enables the encapsulation of ozone gas within 1 trillion nanobubbles of water. “Ozone is the most effective against pathogens,” said Harmer.

Harmer explained that determining how to get the ozone gas—which is very hazardous on its own—into the bubbles was one of the challenges the company faced during the product development process. His team learned a lot as they iterated, and now the solution they developed has a provisional patent. The goal is to one day license the technology to a manufacturer.

To date, the company has received funding from the U.S. Department of Agriculture and a Small Business Innovation Research grant from the U.S. Food and Drug Administration. Winning the $25,000 prize from the Food Disruption Challenge will enable the company to further its mission to become widely used across the fresh produce industry. “We want to become established as the nanobubble ozone people,” Harmer told the judges.

And the People’s Choice Award Goes To… 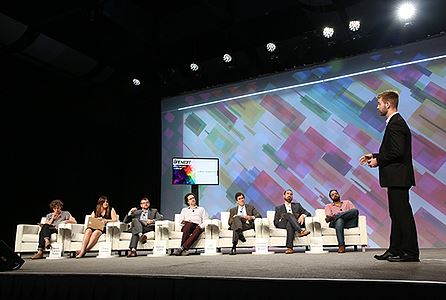 In addition to the top prize, IFT19 audience members had the opportunity to cast their vote and select one of the finalists for the Food Disruption Challenge People’s Choice award. Heliponix, the developer of an in-home, hydroponic growing device called a GroPod that enables consumers to grow their own produce, was chosen as the recipient of the competition’s $5,000 People’s Choice Award. Recent Purdue University engineering graduates Scott Massey and Ivan Ball created the energy-efficient appliance in hopes of turning “everyday residential consumers into self-sustaining hydroponic farmers.”

The dishwasher-size appliance can yield a full supply of leafy greens, herbs, and microgreens in a 30-day growing cycle. This equates to a 500x more efficient use of space than traditional soil growing operations. Although the young entrepreneurs have only sold 12 devices thus far, Massey is confident about the GroPod’s growth potential: “This is something we truly see as becoming a mainstream appliance,” he said.

Advancing the Science of Food

Round one of the IFTNEXT Food Disruption Challenge launched in November 2018 with 75 applicants. In the months to follow, participants went through two rounds of competition before being narrowed to a group of 10 companies. A final round of judging reduced the field to the five finalists.

The other finalists, who pitched their innovations during the final round at IFT19, included the following companies.