Founded 63 years ago by a visionary group of legendary professionals from industry, government, and academia, the Institute of Food Technologists has grown into a society of about 26,000 members. Throughout its history, IFT has contributed to the enhancement of the North American and world food processing, packaging, and distribution systems. But we face and have faced singular challenges. The overwhelming majority of members come from food industry organizations (processors and suppliers), but their representation in IFT’s governance (officers, committee members) remains low in proportion to other sources (academia, government, etc.).

Because of the disproportionate representation of industry in number of members and financial input (more than 90% of IFT revenues come from industry and industrial members), suggestions have been made that IFT needs to offer more programs tuned to the need of industrial members to involve them more in IFT’s programs and governance.

Since more than three-fourths of members are employed by industry, their relative nonparticipation in IFT activities has been a concern of IFT management. With the goal of increasing the number of industry members in leadership roles, then-IFT-President Mary Schmidl in 2000 formed a task force to identify and measure industrial member participation to develop means to better meet the needs of industrial members. The results would provide a basis for IFT management action to enhance offerings to industrial members.

In 2000, the yet-unformed IFT Task Force was charged to:
• Report and recommend on matters concerning members employed by industry.

• Investigate issues of recognition for members employed by industry.

• Review representation on committees and offices of IFT of members employed by industry.

• Identify means to increase the value of IFT to members employed by industry. 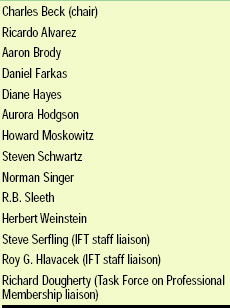 The Task Force on Industrial Member Participation was organized in 2001 and evolved into the members listed in Table 1. The task force held its first meeting in March 2001 with active input from the IFT Executive Vice President, President, and President-Elect, plus other interested individuals.

Before leaping to a conclusion that IFT members from industry are either satisfied or dissatisfied and have a smoldering demand for change, it was important to confirm and quantify the perception in a rational manner. The task force concurred that an in-depth survey of industrial membership was essential before any recommendations could be generated for IFT management action. Consumer research proposals were solicited, and the task force proceeded with a proposal by Moskowitz Jacobs, Inc., White Plains, N.Y.

The Study Methodology
The Moskowitz Jacobs proposal to determine industrial member attitudes was to conduct conjoint research employing their “Idea Map” technique, in which survey respondents are asked to compare items on the basis of attributes or features. This consumer testing protocol is based on the premise that “People can’t tell you what they want, but they can tell you when they see it.”

The technique offers the consumers—in this case, IFT industrial members—sets of 3 or 4 out of 120 existing or hypothetical IFT products or services (elements) and asks them to rate these elements on a scalar basis. By performing the survey on a repeating basis, with the same people each time, the results become a prioritized list of elements for each subject to describe IFT industrial member perceptions. These data can then be cross-tabulated among the demographic or psychographic (mindset) groups to quantify “target markets” for action if the results indicate such is warranted.

• Selection of Elements. To develop the list of elements, each task force member was charged to ask six or more colleagues from industry, “What new or improved products and/or services should IFT offer to improve industrial member satisfaction and employer benefit?” Inputs were also solicited from participants in the IFT Research Directors Roundtable. Within one month, a list of about 150 product/service element suggestions were compiled from all these inputs. The task force sorted the elements, removed the redundancies, and reworded the elements into a uniform comprehensible language.

In addition to the groups of structured elements that the IFT industrial members were asked to quantify, open-ended questions were included to minimize the probability that the task force had inadvertently omitted key issues that are critical to the members, and to crosscheck the conjoint results for consistency. All of the components came together in randomized groups of services. A single respondent would only encounter one-third of the 120 elements.

• The Survey. The task force decided to survey only IFT industrial members who have e-mail/Web access. The survey was pretested on a sample of respondents to determine that the survey form was understandable, was not ambiguous, and could deliver reproducible results. The data from the pretest were not used in the final tabulations.

The survey questionnaire was posted on the Internet, and IFT sent a letter by both mail and e-mail to 10,000 members with industry affiliations. The letter described the task force and its survey and invited them to participate. The letter emphasized the importance of participation.

Each survey participant was presented with a set of three or four products/services at one time and asked to answer the question, “How important is this set of offers from IFT to you?” on a scale of 1 = “Irrelevant to me” to 9 = Very important to me.” The data were tabulated, modeled by regression analysis, and statistically assigned a level of importance for each product/service, ranging from importance to irrelevance or rejection of the element.

One very useful aspect of the program is the ability to restructure the data into combinations that were not in the original research in order to predict what each respondent group would have answered had the question been presented. Experience has demonstrated a 0.85 correlation of simulated to real responses using this technique.

A total of 801 complete responses were received, a number regarded by Moskowitz Jacobs as quite sufficient to generate statistically significant results. This 8% response was also considered to be in the normal range for consumer research. The data were analyzed by Moskowitz Jacobs and critically reviewed by the task force.

• Psychographic Segmentation. Based on their responses, IFT industrial members were classified into the four distinct psychographic segments indicated in Table 2. The name of each segment was chosen on the basis of the elements most appealing to that segment.

The respondents could be distinguished by psychographics or mindset, but the mindsets did not correlate with demographics such as gender, age, income, education, job classification, geography, experience, industry type, etc. Traditional demographics appeared to be relatively uniform across all four psychographic segments; thus, trying to identify concerns or opportunities by demographics is futile.

As shown in the table, one segment (“mail boxers”), representing about 12% of the population surveyed, are satisfied just being members; they are not interested in personal interaction or involvement. Another segment (“enthusiasts”), representing about 31%, are so enthusiastic about IFT that they would support more than half of the 120 product/service offerings. The other two categories, representing nearly 60%, are interested and would respond to change and new offerings, but more selectively. Thus, a majority of industrial members are overtly interested in amplified activities of IFT.

• Results. Perhaps the most surprising result of the survey was the paucity of strongly held opinions, and a virtual absence of opinions coinciding with those perceptions that precipitated this study. These results do not, however, imply a lack of areas for improvement.

The findings from the open-ended questions were consistent with the conjoint results and, surprisingly, did not spotlight strongly felt needs. Neither did any complaints with quantitative support arise.

Indicated Actions
Many proposed services or service improvements received enough industrial member support to warrant action or at least serious consideration. Of these, some are easily implemented, while others may require more budget, planning, coordination, or testing. It is important to realize that any single new or improved service will never appeal to more than two psychographic segments, and often to only one segment. Nonetheless, by adding these services, we can strengthen the benefits to members, one segment at a time.

Short-Term Action Items. The following services or improvements were considered to be easily implemented; some have already been activated. None would be considered a turn-off to members who didn’t request these services; nonsupporters need not avail themselves of these services.

• Focus some symposia at the IFT Annual Meeting on technological and business issues.

• Organize roundtables to stay on top of regulatory and general (nonproprietary) developments.

• Include job descriptions and titles in the IFT salary survey.

• Hold a forum for face-to-face interaction with key suppliers.

• Offer one-year gratis (or substantially discounted) IFT membership to graduating food technologists at the time of their employment.

Longer-Term Action Items. These items may be expensive, be controversial, or require coordination and planning—but most can be implemented.

• Provide problem-solving resources. Three elements are involved: (1) Provide members access to retired scientists and technicians who can voluntarily assist with short-term problem solving. (2) Provide technical access to resources to solve problems. (3) Have a hotline for answers to regulatory questions.

• Provide a technical program on the science and potential of recent patents.

The IFT membership is highly diverse, so no single IFT product/service will please everyone. However, there were no clearly expressed dissatisfactions, so there can be no across-the board cures for any dissatisfactions. Although some members are very vocal, the survey did not generate any particular rational or emotional dissatisfactions that would act as a basis for dropouts. The data indicate that IFT and its current structures are certainly not considered universally negative by any population segment, i.e., that members are generally satisfied. As an aside, IFT industrial members did not express overt concern over the predominance of academics in IFT governance.

One key finding, however, is that, based on Moskowitz Jacobs’ experience and success stories, 20% or more of the IFT industrial membership can be significantly better satisfied by IFT’s implementing a set of actions to bring selected benefits to the IFT membership.

Target Markets
As stated above, the four target markets have different mindsets but common demographics. Therefore, IFT would have to launch the recommended changes and new programs without the ability to use existing demographic information to single out the members who would be most receptive to them. Still, IFT could expect the changes to lead to positive reactions among the members belonging to at least one of the three active psychographic groups, and might even generate good response among the non-enthusiasts (mail boxers).

IFT industrial members are a latent resource that can be tapped to grow IFT in size and vitality through greater involvement. However, the fact that individual industrial members cannot be specifically targeted by zip code, gender, or any of the other conventional demographic measurement tools means that such truly professional industrial members—defined as those who are interested plus those who are enthusiastic—are scattered among our entire membership. Thus, reaching them requires visible programs that will be recognized by them.

Conclusions
IFT’s industrial members are a large and diverse force, some of whom want to participate more actively. More than half of the industrial members—those interested and those enthusiastic—indicated that although they are happy and satisfied, they would respond positively to more innovative programs directed at them.

The most important results from this program are that although IFT industrial membership may be classified by traditional demographics, these segmentations are not meaningful in the perspective of the mindsets of the industrial members. Members who cannot be identified by traditional demographics constitute a majority and can be influenced by positive IFT actions.

The IFT leadership has already begun implementing some of these recommended actions and is evaluating others for the benefit of the IFT membership.