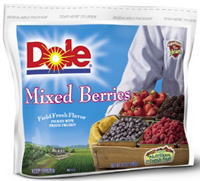 Frozen fruits (with sales up 11%) and breaded vegetables (up 7%) also made the Top 10 list, albeit from a small base. Dole’s new Fresh Frozen Fruit line is 100% natural and says “just as nutritious as fresh fruit.” Frozen vegetables—still the largest frozen segment—is shifting to gourmet blends, such as Birds Eye Foods’ Szechwan Vegetables in Sesame Sauce.

Organic frozen foods are another hot segment, reaching $206 million in 2004 with increases of nearly 20% per year since 2001 in mass channels according to ACNielsen. Organic frozen meat entrees posted the largest unit gains in 2004, up 356%, followed by organic meat 308%, seafood 148%, poultry 166%, poultry entrees 107%, snacks and hors d’ouvres 41%, and frozen breakfast foods, fruits, pizza, and snacks all up 26% respectively.

And the foods are getting healthier. Amy’s Kitchen introduced a sodium-restricted organic line, and Ian’s Foods’ has a new line of wheat- and gluten-free “mini’s” for small meals or snacks, such as Popcorn Turkey Dogs and Mini Cheese Burgers.

Why Cannabis Edibles Are Creating a Buzz February 1, 2019

Getting Creative With Confectionery August 1, 2018