Whether it is trying to remember important information or just wanting to keep an overall healthy mental state, brain health is a concern for the very young to the very old. Omega-3 fatty acids can be found in infant formula for brain development. Baby Boomers look to ginkgo biloba supplements to maintain their sharp mental states. 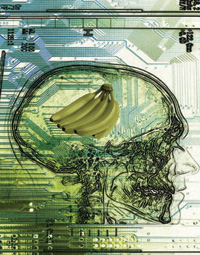 From fatty acids and botanicals to phospholipids and L-carnitine, brain-health ingredients are emerging. Some ingredients reportedly enhance mental performance, while others protect against neurodegenerative processes as one ages. For the young, they may aid in learning and cognitive function, while for the elderly they may offer protection against Alzheimer’s disease.

Here’s a look at some of these brain-boosting nutraceuticals and the latest research supporting them.

Blueberries
The antioxidants in blueberries, particularly the anthocyanins, are believed to be behind their reported benefits in areas such as memory and Alzheimer’s disease. Studies of older laboratory animals consuming blueberry-supplemented diets have shown measurable improvements in memory, coordination, and balance, says the U.S. Highbush Blueberry Council.

Researchers from the Universidad Nacional Autónoma de Mexico, University of Houston–Clear Lake, University of Texas, and Tufts University found that a blueberry-enriched diet prevented an age-related increase in the protein NF-B in rats (Goyarzu et al., 2004). NF-B is a protein transcription factor that is elevated by aging and oxidative stress.

Researchers at the University of South Florida College of Medicine, James A. Haley Veterans’ Hospital, and the National Institute on Drug Abuse recently found that rats fed diets enriched with blueberries, spinach, or spirulina experienced less brain cell loss and improved recovery of movement following a stroke (Wang et al., 2005). The authors suggested that antioxidant and anti-inflammatory substances in the fruits and vegetables may somehow reduce the nerve cell injury and death triggered by a stroke. Their earlier research demonstrated that treatment with diets enriched with blueberry, spinach, or spirulina reduced neurodegenerative changes in aged animals.

Researchers at the Neuroscience Laboratory, USDA-ARS Human Nutrition Research Center on Aging at Tufts University showed that a blueberry-supplemented diet reversed age-related decline in hippocampal heat shock protein 70 (HSP70) neuroprotection (Galli et al., 2005). Using rats, the researchers examined whether short-term supplementation with blueberries would enhance the brain’s ability to generate a heat shock protein 70 (HSP70)–mediated neuroprotective response to stress. Their findings suggested that a short-term blueberry intervention may result in improved HSP70-mediated protection against a number of neurodegenerative processes in the brain.

Zinc
A study at the USDA/Agricultural Research Service Grand Forks Human Nutrition Research Center in North Dakota showed that zinc supplements enhanced mental performance in 11-year-olds (Penland et al., 2005). In the study, 111 girls and 98 boys consumed 4 oz of fruit juice containing either 0, 10, or 20 mg of zinc gluconate each school day for 10 weeks. At the beginning and end of the study, students performed a battery of tasks designed to measure mental and motor skills, including attention, memory, problem-solving, and hand-eye coordination.

The children taking an extra 20 mg of zinc responded more quickly and accurately on memory tasks and with more sustained attention than classmates who did not take the mineral. According to the researchers, the findings indicated that young adolescents may benefit from increased zinc intakes.

Researchers at the University of California, Los Angeles, showed that mice fed a diet rich in DHA had less beta-amyloid, a protein that causes plaques in the brains of Alzheimer’s patients, than mice on a normal diet, indicating that DHA may help prevent Alzheimer’s (Lim et al., 2005). Total amyloid was cut by 70% in mice on the DHA-rich diet compared to those on another diet, said the researchers, while brain plaques were reduced by 40.3%.

Focusing on omega-3 fatty acids’ benefits in brain health, a new omega-3 milk was introduced into UK supermarkets in May of this year. Dairy Crest, Esher, Surrey, launched its omega-3 fortified milk, St. Ivel Advance, marketing it to families with young children. Information on the company’s Web site says that omega-3s may enhance learning and concentration in children.

According to Lonza Inc., Allendale, N.J., which offers L-carnitine and other forms under the L-Carnipure® brand name, recent research has found that both L-carnitine and its ester form, acetyl L-carnitine (ALC), may play a role in supporting cognitive function. ALC plays a role in nerve cell metabolism by acting as a source of acetyl groups for the synthesis of acetylcholine and for energy-producing reactions. Numerous studies, including studies in people with Alzheimer’s disease, have concluded that ALC has a role to play in maintaining brain health as one ages.

In another study, researchers reported that oral L-carnitine administration improves the learning ability of old rats and seems to be able to reduce the loss of cognitive functions that occur with aging (Lohninger et al., 2001). Furthermore, L-carnitine supplementation in healthy elderly subjects has been shown to significantly reduce mental fatigue, in addition to exerting other positive benefits (Pistone et al., 2003). These results with L-carnitine further support a role in maintaining brain function as one ages.

Botanicals
Ginkgo biloba and ashwagandha extracts have also been linked to potential benefits in mental health. In 2002, The Alzheimer’s Society and the Cochrane Collaboration at Oxford University in the UK published a comprehensive review of 33 clinical trials on the use of standardized concentrated extracts of ginkgo leaf for the treatment of dementia (Birks and Grimley Evans, 2005). The researchers concluded that “there is promising evidence of improvement in cognition and function associated with ginkgo.”

Researchers at Oregon Health & Science University’s Dept. of Neurology and MS Center of Oregon linked this botanical to improving memory in multiple sclerosis (MS) sufferers (Bagert et al., 2005). Thirty-nine patients completed the study, with 20 receiving ginkgo biloba and 19 receiving placebo. The researchers suggested that “ginkgo biloba may be effective in improving attention in MS patients with cognitive dysfunction. GB did not alter platelet function or cause significant side-effects.”

The study’s lead author, Jesus Lovera, Research Fellow in OHSU’s Dept. of Neurology, said that those receiving ginkgo “performed better on a test that measures a person’s ability to pay attention and to sort conflicting information.”

A commercial ashwagandha extract, Essentra™, from NutraGenesis, Brattleboro, Vt., is a GRAS functional ingredient that reportedly increases the body’s resistance to stress as it enhances balanced energy levels and mental focus.

“Essentra is currently the subject of a multiphase, double-blind, placebo-controlled study that is assessing the product’s effectiveness in several areas, including mental cognition and concentration,” stated Suzanne McNeary, company President. “We are getting significant improvement in several areas, including concentration and memory, as well as energy enhancement and mood.”

The active constituents in the patented ashwagandha extract provide a multifunctional mechanism of action that protects and enhances mental cognition, particularly memory and concentration, explained McNeary. “The first mechanism of action is associated with Essentra’s augmentation of the antioxidant enzymes superoxide dismutase, catalase, and glutathione peroxidase. The second mechanism of action is associated with Essentra’s up-regulation of cholinergic receptors. The active constituents, withanolides, are responsible for a number of therapeutic actions, including their ability to inhibit cholinesterase, increase acetylcholine, and thereby support mental cognition, in particular memory.”

Phospholipids
Phospholipids are based on a glycerol backbone, with two fatty acids and one phosphate ester of specific alcohols (referred to as “head group”). Several companies offer phospholipid-based ingredients that are targeted specifically for mental health. For example, Israel-based Enzymotec Ltd. introduced SharpPS pho-sphatidylserine in 2003. It contains 60% phosphatidylserine (PS) in a powdered fat-free formulation. Enzymotec’s biocatalytic process enriches soy lecithin with L-serine to give a high-quality soy-PS. According to the company, PS is a natural nutrient, which in supplement form is said to improve cognitive function and enhance various brain activities in all age groups.

The second claim uses the same wording but substitutes the words “phosphatidylserine may reduce the risk of cognitive dysfunction in the elderly.”

Phosphatidylcholine is another phospholipid linked to mental health. It is a major source of choline, a building block used to produce the neurotransmitter acetylcholine. This is a chemical messenger molecule that seems to be involved in neuron networks which are crucial for memory.

Aging is one process that may reduce the availability of neurotransmitters such as acetylcholine. Through dietary intake of phosphatidylcholine, choline can find its way into the cells so that the cells have more of the nutrient and can beneficially influence acetylcholine levels and therefore memory, explains information from Lipid Nutrition, Channahon, Ill. According to the company, a number of animal studies as well as some human studies have demonstrated that dietary supplementation with phosphatidylcholine has memory-boosting effects.

Citicoline
Information on citicoline, a precursor of phosphatidylcholine, and its effects in maintaining cognitive function was presented at this year’s SupplySide East show. Two poster presentations by Kyowa Hakko, New York, N.Y., discussed citicoline’s effects on brain health. The first poster presentation showed evidence that citicoline can increase phosphatidyol-choline synthesis in the human brain, thereby helping to maintain cognitive function. The second poster provided in-vivo data demonstrating that oral citicoline intake may be of use in reversing age-related cognitive changes.

The company was the recipient of the 2003 Nutracon NutrAward for the best new dietary supplement ingredient, for its Cognizin™ brand citicoline.

Market Opportunity
So whether it’s blueberries, fatty acids, or phospholipids, there are unique ingredients that may provide the opportunity to enter the brain-food market.