In the realm of hot topics in food packaging, no topic generates more heat than radiofrequency identification (RFID). Before the end of time, all of us will be affected by RFID in ways we cannot imagine today. 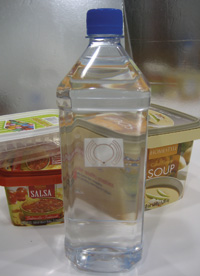 Many consumer packaged goods companies are trying to implement supply chain management with RFID to track all their inventories for time and location; to locate specifically where any single item is at any given time; to reduce out-of-stocks, the absence of a product from a shelf when a consumer wants it; and to reduce inventory levels while decreasing out-of-stocks.

If a retailer shelves 30,000 individual items in a retail location, how might he know if any single or multiple items are on the shelf, on the floor awaiting shelving, in the back room, on the receiving dock, on a truck wending its way to the store, in the distribution warehouse, in the packager’s warehouse, never produced, or, perish the thought, shoplifted? Information is a powerful tool to reduce costs of inventory, shelving labor, replenishment and even simply locating items "lost" in the system.

Imagine the ability to track dated refrigerated foods automatically, to stock only the items required for the day or the next two hours, to move short-expiration-date foods immediately, and to obtain supplies automatically without manual inventorying and ordering. Imagine the reduction in discards—now at as much as 15% in retail chilled foods such as fresh fruit or dairy products. As one example, Wal-Mart reported a 16% reduction in out-of-stock with only 300 suppliers in only the 1,000 stores in its system in 2005. Replenishment was three times faster with RFID tagging than with manual reading, an amazing achievement and major cost saving.

The U.S. Dept. of Defense is working to implement knowledge-enabled logistics through fully automated visibility and management of assets in support of the troops. And health care providers have enumerated benefits of implementation of RFID, including anti-counterfeiting of pharmaceuticals, patient safety, theft reduction, paperwork reduction, and ability to track and trace specific drugs.

Provides More than UPC Does
An RFID system is capable not only of location sensing and signaling—the major target of the moment—but also (with appropriate transducers) of communicating other crucial information, such as temperature history, microbiological status, oxidation state, age and residual shelf life, and even updated nutritional values.

According to Nigel Wood, Director of GS1 Canada ([email protected]), speaking at the April 2006 symposium on packaging sponsored by the Institute of Packaging Professionals and the Guelph Food Technology Center, the foundation for employing RFID is the Electronic Product Code (EPC), an extension of the Universal Product Code (UPC) that is printed on virtually every food package in the industrialized world.

The UPC consists of a machine-readable bar code and an eyeball-readable numeric code. Its principal rationale is for semi-automatic price summing and, to a degree, inventory control. However, it has limited information capacity. Limitations include requirement for line-of-sight reading, label space, and inability to read and identify multiple codes.

The EPC, in contrast, can store many orders of magnitude more data than the UPC. It consists of a header, an EPC manager number, an object class number, and a serialization number. In simplistic terms, it contains the UPC plus a header plus serialization. Thus, the individual item is identifiable—at a distance. Although specificity of this nature is not usually required for food, its usefulness for medical devices and pharmaceuticals is apparent.

The RFID System
An RFID system consists of four basic components:
• Tag. This is a device composed of an electronic circuit plus an integrated antenna, a portable memory using radio frequency to transfer data between the tag and the antenna and from the antenna to the receiver. This type of device may be read-only or read-write, and active (with battery and thus capable of transmitting data) or passive (actuated by an external signal). Presently, the electronic circuitry is in a silicon chip. The tags cost about 5–9¢ each, making them cost-prohibitive for most primary food packages. The cost depends mainly on the surface area of the silicon chip and the antenna metal.

• Antenna. The antenna connected to the chip (a critical link) receives, or harvests, and transmits electromagnetic waves, resulting in wireless data transfer. The antenna is usually constructed by etching a thin film of copper or aluminum deposited on the surface of the substrate that underlies the tag. The chip and antenna are mounted on a substrate, either plastic film or paper, that is adhered to the package.

• Reader. The external reader in the warehouse, store, or central site communicates with the tag via the antenna, interprets radio waves into digital information; and receives commands from the application software. Additionally, the reader may send power to passive tags.

• Computer. The premises computer reads/writes data from/to the tags through the reader; stores and evaluates the obtained data; and links the transceiver to application software. Today, it represents a high capital investment, since it is installed at every site. The less-expensive version reads transmissions from powered or active tags, which are more expensive on-package forms. Futurists envision miniature readers on every store shelf and home shelf to even more closely track packages. Data from the readers—location, identification, status, etc.—may be instantly interpreted for action.

Although nanotechnologies are being studied as substitutes for chips and tags, this development is in the future. Meanwhile, other, perhaps more-feasible, options to the relatively expensive chip/antenna tag are being pursued. Examples of these devices, which do not contain a silicon chip, include printed circuitry, RF inductor/capacitor arrays, diode arrays, and chemicals that emit signals when moved. If achieved, they could reduce the "tag" cost to about 1¢ per unit.

The cost of acoustimagnetic tags, such as the devices employed for nonstop road tolling, appears to be at an irreducible minimum. The cost of surface acoustic wave (SAW) devices has the potential to be reduced for potential packaging applications.

Electromagnetic tags and film transistor circuits (TFTCs) are printed conductive ink circuits. Conductivity is achieved by incorporating silver, carbon, or other semiconductor materials into a nonconductive matrix. Some observers ask if enough silver—or even silicon—is available to fill the demand if this system proves workable. The basic question is can the conductive printing ink technology be rendered sufficiently reliable to replace chip plus antenna technology? And, if so, when?

Challenges in Packaging
Although it is easy enough to envision an RFID tag on every single food package, that goal is very much in the future. For example, each package material exhibits different behavior in the presence of radio frequency, even at these low power levels. Metal obviously has a large effect, reflecting the radiations. Plastic’s interaction depends on the polymer and its mass. Glass and paper exert little effect in pristine form.

The presence of water in liquid or vapor form exerts major effects on readings. As more than one competitor has said, packaged food products are often RFID unfriendly. Packaged water or analogous aqueous beverages reduce accurate readings by as much as 75% and are thus a challenge.

As the moisture content of corrugated fiberboard cases (or paperboard cartons) increases, readability declines—sometimes to as low as zero—so accuracy of the data is affected. To overcome this deficiency, the position of the RFID tag on a pallet (where the tag is presently mainly applied) must be carefully considered. Placement of RFID tags directly on corrugated fiberboard cases is not currently advised because of adverse economics.

An additional challenge is the need for worldwide standards, if the many and various members of the vast packaged-product distribution chain are to communicate with each other. Standards are being developed by EPC Global so that uniform data may be transmitted and received over secure private networks. Many large companies, and especially those in the electronic interchange business, are involved in the development of standards.

Playing a Key Role
Today we are technically capable of incorporating RFID on every food package to gain the benefits of continuous single-unit monitoring, but costs, interferences, and our ability to meaningfully use the data and maintain privacy of the data are issues that must be addressed before it is universally adopted.

Adoption of UPC during the 1970s was excruciatingly slow. Since then, however, the package converting industry learned to print with the greater precision required, the electronics industry developed relatively inexpensive laser scanners, and retailers installed the now ubiquitous scanning equipment. The enormous benefits of accuracy, labor saving, and better inventory control are evident.

The leap from UPC to RFID should represent another order of magnitude with potential to communicate data on a host of variables that warrant our oversight and control. Food and food packaging scientists and technologists are obligated to play key roles in these new electronic linkages between the food itself and its many environments and constituencies.

Universities Take the Lead on RFID
Before anyone perceives the notion that the high-tech electronics industry is the sole technical basis for applications of RFID and retailers are the exclusive users, be advised that universities also populate this landscape.

At the core is Massachusetts Institute of Technology (www.mit.edu) through its AutoID Lab and Center for Transportation and Logistics. MIT is one of seven in a world consortium of universities—the others being the University of Cambridge (UK), University of Adelaide (Australia), Keio University (Japan), Fudan University (China), ICU (Republic of Korea), and University of St. Gallen (Switzerland)—working with the standards-setting organization EPCglobal Inc. (www.epcglobalinc.org).

An objective of the consortium is to develop a uniform Electronic Product Code (EPC) that (with security) can be read by any system in the world, as contrasted to each entity developing its own code which would be unreadable by other users or countries. EPCglobal is a nonprofit organization, whose members include food processors, working to integrate the products, systems, and standards required to permit companies to manage and share data.

In our universe of food and food packaging, Michigan State University School of Packaging’s Robb Clarke ([email protected]) jumped into a lead several years ago by drilling deeply into tags and their reading for packages and pallets. Bruce Welt ([email protected]) at the University of Florida followed with groundbreaking developments in application of RFID to distribution packaging. More recently, the University of Florida has established a vibrant Center for Food Distribution and Retailing, linked with major food retailers, foodservice companies, and food processors around the world, with an RFID lab under the direction of Jean-Pierre Emond ([email protected]). Among the center’s current projects are a process for embedding technology for RFID in plastic food packaging; temperature-tracking RFID with the ability to predict remaining shelf life; and tags capable of functioning in high-moisture environments.