Fractionation of cereal grains is an old and sophisticated industry, from which are obtained flour for baking, starch for industrial and food uses, sweeteners, animal feeds, oils, proteins, and dietary fibers. Without some form of processing, cereal grains such as wheat, corn, rice, barley, oats and rye are not edible by humans. 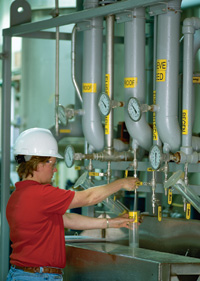 The discovery of milling, at first as tedious hand labor with stones, and later as one of the first communal industries using animal or water power, might have enabled civilization to arise by encouraging settlement and agriculture.

The major components of cereals are starch, protein, fiber, ash, and oil. Whole grains or coarsely cracked kernels are edible after boiling in water or parching in dry heat, but in many cases the results are bland and can be bitter from the phenolic compounds in bran (the outer brown layer of many grains). People developed a preference for lighter-colored cereal products as food, and later for more purified fractions from grains for special purposes.

One such purpose much in the news lately is the production of liquid fuels from renewable sources, especially ethanol from corn. The need for improved efficiency on a very large scale has inspired new developments in cereal processing. 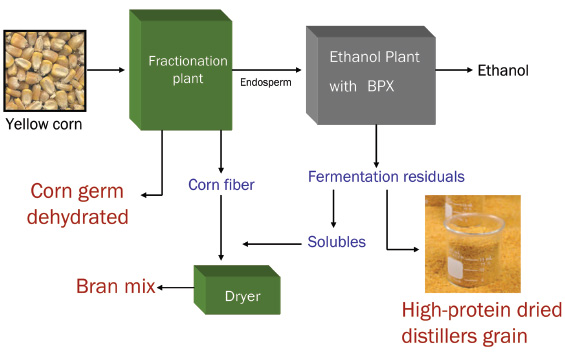 Basics of Milling
All cereal milling involves size reduction of the grain and then separation of its parts by relying on differing physical properties, such as size and density. Size reduction may be by crushing between steel rolls, by grinding between abrasive stones, or by striking with rotating blades. Proper operation of any mill demands careful control of moisture content of the grain so that it has the right hardness. At the same time, it is desirable that the bran remain relatively soft so that it forms somewhat larger pieces than those formed from the starchy endosperm.

Most grains are milled dry after tempering by drying or moisture addition, as needed. The dry powder is separated first by screening and then by air-agitated density separation. In the case of wheat, the bran is removed and then the particles of starch and protein are separated by a series of very fine screens, with larger particles being returned to roller mills. The flow pattern in a wheat flour mill can become very complex, adjusted as needed for the properties of the wheat and to produce the desired final products. Flours are graded by protein content, which is primarily affected by the wheat itself, and by ash, which is taken as an indication of bran content.

Flow in a flour mill is by gravity wherever possible, so the mills are normally tall, multi-floor buildings. Simpler and more-compact flour milling systems have been devised, especially intended for developing countries.

Milling of grains commonly consumed as whole kernels, such as rice and oats, may involve simply removing the outer layer of bran by abrasion or gentle cracking and air aspiration. Often the bran becomes animal feed, but an edible oil can be expressed from rice bran that has been cooked by extrusion to inactivate lipases.

Wet milling is used primarily for corn and is directed at producing pure starch and various by-products. In the conventional process, whole corn kernels are soaked in water for as long as 36 hr. The water has several thousand parts per million of sulfur dioxide added, which helps soften the bran and separate protein from starch particles. Size reduction may be by hammer mill or by rotating plates placed close together. The germ, which contains as much as 40% oil, is separated by flotation in the starch slurry. The fiber-containing bran is separated by self-cleaning screens, then the starch and protein are separated by density difference in hydroclones. These are small conical devices in which an entering slurry is swirled at high velocity so that centrifugal force enriches one exit stream in protein and the other in starch. Typically, many hydroclones are arranged in banks and fed countercurrently.

Since recovering starch is the main objective, the fiber and protein streams may be re-ground and washed to recover starch. The steep liquor from soaking contains solubles, which are concentrated by evaporation and added to the fiber and protein streams for animal feed. Corn steep liquor contains nutrients which have been helpful in pharmaceutical fermentations, but that is not a major market.

Starch is used to size paper and textiles, can be used as is or modified by chemical reaction for use in foods, is used as an adhesive in packaging, and can be converted to such sweeteners as corn syrup and high-fructose corn syrup. To make syrups, starch is first liquified by enzymes and cooking, then is cooled and saccharified (broken down into its component glucose units) by a different enzyme. High-fructose corn syrup is made by enzymatically isomerizing glucose in corn syrup to fructose, using immobilized enzymes. The fructose concentration can be increased by large-scale chromatography. Ion exchange and carbon adsorption are used to remove color and other impurities from corn syrups.

Corn syrups can also be dried to give corn syrup solids, which consist of glucose and maltodextrins (larger fragments of polysaccharides). Fructose can also be purified and crystallized. Finally, of course, starch can be saccharified and fermented to alcohol and other compounds.

Developments in Alcohol Production
George Robertson and Dominic Wong, Lead Scientists at the U.S. Dept. of Agriculture’s Western Regional Research Center, Berkeley, Calif. (phone 510-559-5866) have been researching ways to reduce the energy requirements of ethanol production from corn. One promising technique is raw starch hydrolysis (cold hydrolysis), in which starch is liquified without requiring cooking. The key is an altered enzyme which can attack the starch granule without requiring it to be swelled or gelatinized by heating. Broin Companies, Sioux Falls, S. Dak., a major contractor in the ethanol field, has commercialized cold hydrolysis by cooperating with a major enzyme supplier, according to Stephen Lewis, Broin’s Director of Research & Product Development (phone 605-965-2200 x10228). Broin also has commercialized two other developments, dry fractionation and very-high-gravity fermentation, all directed at improving efficiency.

Robertson points out that cold hydrolysis has some drawbacks, including a higher risk of contamination of the fermentation because the cooking step also serves as a sterilization. Without that protection, the broth or beer can be contaminated by microbes that consume nutrients without producing ethanol. One solution is to add antibiotics, but then the distillers grain by-product might be undesirable where antibiotics are not wanted in animal feed, as is the case in Europe. An advantage of cold hydrolysis is that the distillers grain by-product, which is high in protein, is not thermally damaged and so is more digestible.

Steve Eckhoff, Professor of Agricultural and Biological Engineering at the University of Illinois, Urbana-Champaign (phone 217-244- 4022), explained one approach to dry fractionation. Conventional dry corn milling separates the germ by gentle cracking followed by use of a vibrating gravity table. That may be what Broin is doing, he said. Another approach he suggested is to give corn a brief soak in water to take advantage of the fact that the germ selectively absorbs water faster than does the endosperm. Then the corn can be cracked on rolls, and the germ will flake as a result of its softness, while the rest of the kernel shatters. A simple screening can then remove the germ with its valuable oil. The rest of the corn is higher in starch and can increase the fermentor’s output.

Very-high-gravity fermentation requires finding yeasts that can tolerate a higher alcohol content. Anything that increases alcohol concentration reduces the energy needed to produce nearly pure ethanol. In the distillation of the fermented beer, an azeotrope of about 95% ethanol is first produced. To remove the last bit of water, the common practice now is adsorption. Mike Ladisch, Professor of Agricultural and Biosystems Engineering at Purdue University, West Lafayette, Ind. (phone 765- 494-1180), helped develop a commercially practiced process in which ground corn is the adsorbent. The corn is reused for many cycles, according to Ladisch.

Ethanol production from corn now consumes about 20% of the United States corn crop and is growing rapidly. Most analysts have concluded that increasing the value of by-products and reducing the energy consumed are keys to improving the economics of ethanol. One might speculate whether some of the developments in technology could be gainfully applied to brewing or other fermentations.