The process of evaluating food texture has come a long way since the 1950s, when scientists at the Massachusetts Institute of Technology developed a novel instrument called the strain-gauge denture tenderometer. Designed to simulate the masticatory action of the human mouth, its purpose was to record in an unbiased manner the physical condition of a food sample. 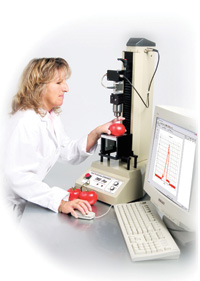 A dentist outfitted the device with a set of plastic dentures, so it’s no surprise the instrument was affectionately known as "Mr. Chewer." Since food slipped out during mastication, the dentures were replaced with a plunger and a plate to simulate their function.

This modified instrument was later used by Alina Szczesniak ([email protected]) for her groundbreaking work to quantify the mechanical parameters of texture. Szczesniak, retired Principal Scientist, General Foods Technical Center, Tarrytown, N.Y., began her career with General Foods, and one of the first projects assigned to her was to "make sense" of texture.

"The long-term plans we developed focused on three questions," Szczesniak relates. "Is texture important? How can it be measured? How can it be created and preserved?"

Using the modified Mr. Chewer, which she called a texturometer, she then quantified the mechanical parameters of texture, a method later known as texture profile analysis (TPA).

TPA is the sensory analysis of the texture complex of a food in terms of its mechanical, geometrical, fat, and moisture characteristics, as well as the degree that each of these characteristics is present and the order in which they appear from the first bite through complete mastication.

"This method recognizes that the sensory perception of texture is a dynamic process with respect to force, time, temperature, and the influence of saliva," Szczesniak says.

For her trailblazing work on texture, Szczesniak received the 1985 Nicholas Appert Award, the highest award that the Institute of Food Technologists bestows. She is the only woman thus far to receive this honor.

Subsequent work by others in the area of texture measurement led to such instruments as the TA.XTPlus Texture Analyzer, currently engineered and manufactured by Stable Micro Systems, Ltd., Godalming, Surrey, UK, and distributed in North America by Texture Technologies Corp., Scarsdale, N.Y. (www.texturetechnologies.com).

"The hundreds of available probes and fixtures, as well as built-in application studies, allow customers to leverage our test experience and not be forced to create test methods from scratch," Johnson elaborates.

"When applied to TPA," Szczesniak adds, "the instrument offers a big advantage of being computerized and automatically calculating values of the mechanical parameters of texture."

"With additions of acoustic signal-capturing capabilities, using electronic instruments to capture the crunchiness of food has become prevalent in the industry," Rao points out. "And dynamic measurements of different food strengths and stiffness, instead of just static measurements, are becoming standard in industrial applications."

According to Bourne, a "texture note" is a textural attribute that has been identified by people. For example, firmness, crispness, and creaminess are texture notes. Most foods show 15–30 texture notes from the time of pickup to final swallowing, compared to five taste notes detected on the tongue and hundreds of odor notes detected in the nose.

"Some texture notes, such as hardness or softness, are dominant and easily measured," Bourne elaborates. Others—e.g., tooth packing—are generally not directly identified by measurement.

Some say the interpretation of texture is a sensory attribute, and believe that only people—not instruments—can adequately measure texture, Bourne and Szczesniak point out.

"The universal testing machines that are used to measure textural properties of foods can be configured to use a number of different test principles, for example, puncture, gentle deformation, cutting, extrusion, bending-snapping, crushing, and tensile," Bourne emphasizes. "For the successful evaluation of texture, it’s critical to establish a principle that correlates instrument measurements with what people tell us is texture. Identifying the correct test principle is half the battle. Every test principle will correlate some texture properties and not others. If you use an inappropriate test principle for an instrument, you’ll never get a good correlation with the sensory assessment of texture quality."

"Texture measurement techniques are being transferred from established research through to the factory floor, providing practical benefits to today’s food technologist," he says.

According to Lakeway, manufacturers want to measure texture daily at processing facilities to decrease substandard product, and increase yield and product quality. "The goal is to produce a more consistent and acceptable consumer product, especially in developing countries looking to export. These users require affordable and easy-to-use quality assurance tools to maintain maximum product quality," he says.

There are new ways of measuring certain texture attributes besides firmness, Johnson says. "Now, for example, we can also determine the freshness of bread by evaluating its resilience, stiffness, and springiness. We can even simultaneously capture and analyze a product’s sound profiles."

Johnson adds that sound is a very high-profile textural attribute, particularly for consumers of cereals and snacks. "Food industry researchers are using jagged-line analysis to study the magnitude of force and acoustic signatures that products generate when tested. This type of analysis has been used for a long time to evaluate the effects of moisture and processing differences on a wide variety of foods. It was not a popular technique because it was a cumbersome analysis to conduct. It can now be automated with the click of a button."

When selecting texture analyzing equipment, people demand flexibility more than anything else, Johnson emphasizes. "It’s a tremendous benefit when you can solve a new problem tomorrow with the same instrument that you used to solve a problem yesterday."

Thanks to Szczesniak and Bourne, quantifying texture is now accepted as standard industry practice to solve design challenges and production issues, Johnson adds. "However, textural problems are as varied as customers’ products, manufacturing processes, and supply chains. No single test method can answer all of the textural problems a consumer will experience. Accordingly, texture analysis instruments must be easy to use, must offer methods that differentiate the methods at hand, yet must be flexible enough to handle today’s and tomorrow’s problems."