Clothing has them. So do electronics, toys, and many other products. And now country-of-origin labels are required for many different agricultural commodities, as well. 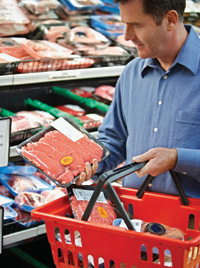 This new requirement is not without controversy. Consumer advocacy groups laud the country-of-origin labeling regulation, called COOL, saying that it provides important information to consumers concerned about the origin of their food. Others, particularly processors and retailers, have given COOL a chilly reception and believe that mandatory labeling will hurt their bottom line by increasing costs—from administrative/record keeping to segregating commodities based on country of origin.

This article presents a brief analysis of the law as well as insights from consumer groups and trade associations that represent retailers and processors.

Why Implement COOL?
Country-of-origin labeling is not new. Almost 80 years ago, the Tariff Act of 1930 required that all manufactured goods imported into the United States list the country of origin. Fast forward to 2002 when Congress amended the Agricultural Marketing Act of 1946 to include COOL in the Farm Security and Rural Investment Act of 2002, also known as the 2002 Farm Bill. The regulation required retailers to inform consumers about the country of origin of ground and muscle cuts of beef, lamb, pork, wild and farm-raised fish and shellfish, perishable agricultural commodities (fruits and vegetables), and peanuts.

The regulation was to become mandatory on Sept. 30, 2004, but because of comments from groups that would be affected by the law, as well as lobbying efforts, the implementation of it was delayed twice. The only exception was for wild and farm-raised fish and shellfish, which have been covered by the mandatory country-of-origin labeling regulation since April 2005. The Food, Conservation and Energy Act of 2008, or the 2008 Farm Bill, was amended to add chicken, goat, ginseng, pecans, and macadamia nuts to the list of covered commodities.

The final rule was published in the Federal Register on Jan. 15, 2009, and was under regulatory review by the U.S. Dept. of Agriculture since January 20. On February 20, Agriculture Secretary Tom Vilsack announced that COOL would become effective on March 16, 2009.

COOL does not address food safety; rather, it is a retail labeling program, and, therefore, "food products, both imported and domestic, must meet the food safety standards of the Food and Drug Administration and the Food Safety and Inspection Service" (Federal Register, 2008a).

Consumer advocacy groups say that COOL is a victory for consumers who want information about the origin of their food.

"If a food safety problem is identified in a particular imported product, as happened with jalapeño and serrano peppers from Mexico [in 2008], then consumers will be able to avoid that product," says Jean Halloran, Director of Food Policy Initiatives for Consumers Union, the nonprofit publisher of Consumer Reports.

More important, though, is the fact that, should such a situation arise, consumers can avoid a product from a particular country rather than the entire product category, thereby minimizing the financial backlash against growers/suppliers across the entire product category, points outs Christopher Waldrop, Director of the Food Policy Institute, Consumer Federation of America.

Having information about countries of origin does not mean that consumers will avoid imported products. "Some people like to buy certain imported products, like New Zealand lamb or Holland tomatoes," says Halloran. "Still others just want to buy local produce. Either way, the new labels will give consumers important new information."

Acceptable Labels
So under the law, what determines the origin of the covered commodities? Well, for fruits and vegetables, peanuts, pecans, ginseng, and macadamia nuts, the origin is simply where they are grown. For many of these commodities as well as for seafood, it is acceptable to list the state, region, or locality as in "Washington apples" and "Alaskan salmon." Listing the country of origin for meat becomes a little more involved. Animals can be born, raised, slaughtered, and processed in a single country, in which case, the country-of-origin label is straightforward. In many cases, though, the animals might be born, raised, and slaughtered in different countries. Postmortem processing may take place in a different location, as well. Here are the highlights of how the commodities covered by COOL will list country-of-origin information (Federal Register, 2009a).

• Ground meat. This product may often include meat from animals originating in several different countries; therefore, the country-of-origin declaration will list all of the countries.

About now, you might be wondering how processed foods fit into all of this. Simply put, they are not covered by the law, which states that a processed food is a covered commodity that has been processed (cooked, smoked, cured, and restructured) to the point it undergoes a "change of character" or that has been combined with another covered commodity or other food ingredients. However, when water, salt, or sugar are used to enhance or prepare for consumption the covered commodity, they are not considered additional food ingredients and the commodity is therefore not considered to be processed. Examples of processed foods are meatloaf, corned beef, breaded cutlets, sausage, flavored pork loin, breaded chicken tenders, roasted peanuts, fish sticks, fruit cups, mixed vegetables, and salad mixes that contain lettuce and carrots and/or packets of salad dressing.

This definition of processed foods is too broad and exempts from labeling large amounts of what should be considered covered commodities, and this is how the law falls short, according to Waldrop. "It means that 95% of all peanuts, pecans, and macadamia nuts will not be labeled because USDA defines 'roasting' as a form of processing," he argues. "About 60% of pork will not be labeled, again because USDA defines 'curing' and 'smoking' as forms of processing," Waldrop continues.

"It also means that many frozen fruits and vegetables and salad mixes will not be labeled because USDA says that combining any two covered commodities results in a new food product that does not require labeling," states Waldrop. "This creates confusion in the marketplace for consumers and means that consumers will find some products labeled while other very similar products are not labeled for no identifiable reason."

In a statement submitted to USDA, Consumers Union took issue with the definition of "processing," calling it "overly expansive" and asking USDA not to use it. "We urge USDA/AMS to make case-by-case rules for what is defined as 'processed' and to be conservative in terms of allowing exemptions for such items. Mixtures, such as fruits salad, should also not be exempted," the statement notes.

Complying With the Law
Under COOL, retailers are responsible for informing consumers about the country(ies) of origin, and they must rely on suppliers to provide them with records to verify the information. Retailers can place the country-of-origin information and method of production (wild or farmed-raised) directly on packages or on signs, placards, label stickers, bands, twist ties, or pin tags. If USDA finds the retailers or suppliers in violation, they face civil penalties of up to $1,000 per violation. But not all retailers are required to abide by the law. Only retailers licensed under the Perishable Agricultural Commodities Act need to comply; butchers, fish markets, and food service establishments are exempt. PACA defines a retailer as one who sells fresh fruits and vegetables at retail and who has an invoice cost for the purchase of these commodities that exceeds $230,000 per calendar year.

With these responsibilities placed on retailers, as well as on packers and processors, it stands to reason that these groups are concerned with how the law will affect their bottom line. USDA estimates the first-year costs to these parties to implement COOL at $2.6 billion; it puts initial and startup costs at $126 million and costs to store and maintain the records at $499 million annually (Federal Register, 2008b, 2009b).

Some argue that segregating livestock based on countries of origin is essential in order to ensure accurate labels and that these costs are overlooked in the estimates. "The challenges faced by packers and processors are brought about by the diverse sources of livestock and meat that are sold and processed in this country and the significant cost attendant to segregating, not only the livestock but the meat products throughout the entire distribution system," says Mark Dopp, Senior Vice President Regulatory Affairs and General Counsel, American Meat Institute (AMI). The trade association represents meat and poultry processors.

Waldrop disagrees with the argument that COOL will increase costs. "The law was changed in the 2008 Farm Bill to make it easier for processors and retailers to comply with the labeling requirements by allowing the use of existing paperwork to identify origin and by reducing the fines for retailers," he says. Indeed, USDA has stated that the 2008 Farm Bill and final rule allow for more flexibility in labeling products of multiple origins and consider animals present in the U.S. on or before July 15, 2008, as animals of U.S. origin. The latter addresses concerns that paperwork listing country-of-origin information for these animals might not be available. Also, the 2008 bill reduces the penalty-per-violation amount from its originally proposed level of $10,000 to $1,000.

Early on, groups like AMI and others advocated for a voluntary country-of-origin labeling system rather than a mandatory one, explaining that a voluntary system would be less costly. "Producers, processors, and retailers could have determined the value of labeling and implemented it accordingly," says Heather Vaughan, Associate Director of Policy Communications, National Cattlemen's Beef Association. She likens the mandatory country-of-origin labeling program to a mandatory marketing program and states that the government should not be in the business of marketing food products.

Labeling food commodities with country-of-origin information may satisfy a consumer's right to know as consumer advocacy groups have argued, but others question whether consumers demanded the information in the first place. "Prior to the passage of COOL, there was little, if any, evidence in the marketplace that consumers were concerned about the origin of meat products," reports Dopp. Rather, it is a food product's safety, price, and quality that concerns consumers, he maintains, adding that country-of-origin labels do not address these issues.

Waldrop, however, is satisfied that the labeling law is mandatory. "If consumers have concerns about a particular food from a particular country, they will have the information to allow them to avoid that food," he says. "Previously, consumers were in the dark in this regard."

"That will be a long fight, though, because of all the complexities involved with how companies source ingredients," says Waldrop.

The individuals interviewed for this article emphasize that COOL is not a food safety system and does not indicate that products from one country are safer than ones from another country. The U.S. has many laws and regulations in place to ensure strict food safety guidelines are followed. Rather, country-of-origin labels inform consumers about the origin of their food—nothing more, nothing less. But for some consumers, this information may be of interest, much like organic, locally produced, or kosher and halal.

Whether they perceive the law as beneficial to consumers or cite its shortcomings, the organizations mentioned in this article, as well as many others that represent the interests of consumers and the food industry, continue to work with the government to ensure a smooth transition and are committed to changing the law if they deem it necessary.