What can a nano technique such as atomic force microscopy (AFM), more commonly associated with surface science labs, do for such an overtly macro and everyday material as food? The answer lies in the relationship between the structure of food and its function. Many of the desirable properties of the food that we enjoy rely upon nano-or micro-scale phenomena. In addition, the importance of structure on the nutritional impact of food is beginning to be understood both in terms of delivering nutrients to the body (Lesmes and McClements, 2009), and also in terms of its potential to exert protective effects against chronic diseases (Gunning et al., 2009). In this article, we will illustrate these areas using two examples of the AFM work being carried out at the Institute for Food Research (IFR), Norwich, UK, using the MFP-3D AFM instrument from Asylum Research, Santa Barbara, Calif. 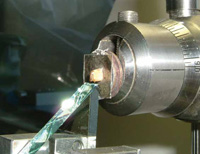 How AFM Imaging Works
AFM is an excellent technique for imaging single molecules deposited onto flat substrates such as mica. But when it comes to plant tissue, things become more complex. Tissue samples are typically rough and multi-component in nature, both of which present challenges for AFM—the former because the appropriate AFM probes only operate properly in a limited window of sample height (< 3μm), and the latter because AFM principally records topography, and thus cannot usually distinguish compositional differences unless the tips or samples are functionalized/modified to introduce contrast.

In addition, AFM is a surface technique, so if you wish to examine internal structure, crafty new methods must be developed. Traditionally, microscopists have used embedding, sectioning, and staining to reveal high-resolution images of internal structure.

AFM senses topography and textural differences, such as hardness, in generating an image. Consequently, textural changes need to be modified to introduce contrast. This can be illustrated through approaches to obtain high-resolution images of the internal structure of starch granules.

Image Contrast in Starch Granules
For isolated starches, the granules can be encased in a resin and sectioned using a microtome. The result is a very flat specimen surface. It is very important to use a non-penetrating resin because penetration of the resin into the granule produces artifacts and inhibits the subsequent development of contrast in the granule (Ridout et al., 2004). To overcome this problem, we have developed an embedding method using a high-viscosity, non-penetrating epoxy resin for isolated starch granules. This allows the granules to be sectioned and the interior of the starch granule imaged directly by AFM (Ridout et al., 2004).

For dry seeds such as legumes or cereals, it is possible to make use of the natural embedding of the starch within the seed (Parker et al., 2008). This has allowed us to study starch granules directly in their native environment with no staining or extraction steps. In the method developed by Mary Parker at IFR, the seed is cut open with a fine saw. The cut seeds are then glued to squares of mica, which are attached to the face of an aluminum scanning electron microscope stub using double-sided tape. The stub is inserted into the chuck of an ultramicrotome and the cut face planed away using a glass knife to produce a surface flat enough to allow imaging by AFM (Figure 1). The mica can be cleaved to produce a sample for imaging in the AFM.

As can be seen in Figure 2, the microtome produces a flat surface which lacks contrast. Gross features such as cell wall or starch granules can be identified because they respond differently to the cutting and polishing, particularly at boundaries, but detailed ultrastructure cannot be seen.

Figure 3 shows an AFM image of a starch granule following hydration. What was once featureless now yields a wealth of topographical detail. The image reveals a banded (growth ring) structure within the starch granules, reminiscent of the growth rings seen on a tree stump. 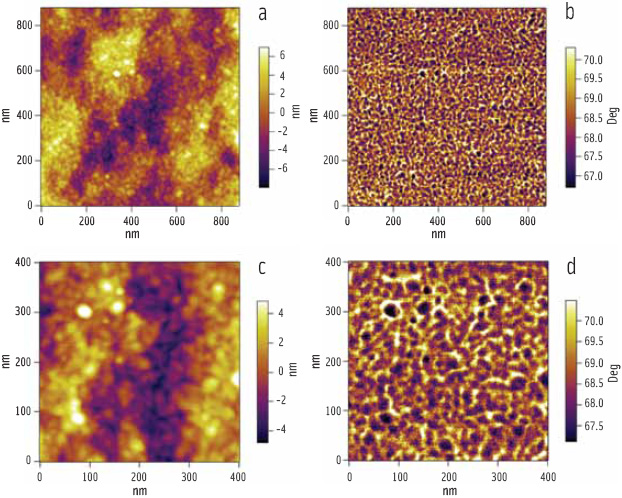 At higher magnification, there is another level of substructure; the rings are themselves composed of globular features of relatively uniform size and shape, known as “blocklets” (Figure 4). The blocklets are packets of hard crystal lamellae, which are contained within the softer amorphous matrix. The images confirm the proposed blocklet model (Gallant et al., 1997) for starch structure and dispel the accepted belief that granules contain alternating amorphous and crystalline growth rings. Furthermore, the images reveal that alternative bands are heterogeneous containing patches (dark in Figure 4) that show little or no swelling on hydration. It is the presence of these patches that allows the eye to see alternating bands.

Phase images are generally more sensitive to differences in the mechanical properties of a sample, and the complementary phase images (Figure 4b, d) reveal that the dark patches also contain blocklets—the crystalline/amorphous ratio within the patches seems to be higher leading to reduced softening and swelling of these regions.

The generation of contrast means that AFM can be used to map the material properties of the granule ultrastructure at high resolution with minimal sample processing. Two polysaccharides can be extracted from starch granules: amylose and amylopectin. Amylose is an essentially linear molecule, which is believed to be present in the amorphous regions of the granule. Amylopectin is a higher molecular weight, heavily branched molecule. The branches form stacks of crystalline lamellae contained within the blocklets. Hence, the combination of topographical and mechanical-based mapping allows the assignment of chemical composition within the granule.

The method reveals that new and interesting high-resolution images can be generated in complex plant materials through understanding and manipulating the contrast in the images. For starch, the methodology offers the prospect of using AFM as one of a number of microscopic techniques for probing changes in chemical and physical structure of starch during plant development and growth, and as a result of natural and induced mutations in biosynthesis.

Studying Fat Digestion
The Western world is facing an obesity crisis (Shi and Burn, 2004) with around 32% of the United States population now being classified as clinically obese, according to the National Institutes of Health. Although the solution to this problem clearly will not be simple nor singular, one avenue worthy of investigation is to try to develop a more fundamental understanding of the dietary uptake of fats. Within this context, the exploration of ways of reducing the rate of lipolysis of dietary fats is gaining increasing interest, since it is believed that retardation of lipolysis induces the so-called “ileal break” response in humans, triggering feelings of satiety which reduce the urge to eat excessively (Golding and Wooster, 2010; Sagalowicz and Leser, 2010; Singh et al., 2010).

The interfacial properties of oil droplets in emulsions can determine their physical interactions, and there is growing evidence that the composition of the oil-water interface also affects biological function in terms of fat digestion and absorption through lipolysis (Macierzanka et al., 2009; Maldonado- Valderrama et al., 2010). A large proportion of dietary fats become emulsified during gastrointestinal-tract passage by biological surfactants such as phospholipids and bile salts present in the body (Golding and Wooster, 2010).

Fat digestion is an inherently interfacial process, dependent on the adsorption of lipolytic enzymes onto the surface of emulsified fat droplets. The best way to study such interfaces with AFM is to create them in the controlled environment of a Langmuir trough and then transfer them onto supporting surfaces such as mica (Mackie et al., 1999; Lucero et al., 2008). Using this methodology, we have investigated the interfacial interactions of plant-derived galactolipids, which have been shown to slow fat digestion (Chu et al., 2009), with mixed phospholipid-bile salt monolayers to try to shed light on their bioactivity (Chu et al., 2010).

Bile salts are a series of biosurfactants secreted by the body during digestion. These salts are believed to facilitate lipolysis of fats by creating favorable charge interactions at the oil-water interface, allowing the lipase cofactor “colipase” to gain a foothold (Donner et al., 1976). Figure 5 illustrates that the addition of bile salts to a previously close-packed phospholipid monolayer disrupts the molecular packing. At the surface concentration chosen for the experiment, the phospholipid film exhibits a mixture of “solid phase” domains (where the phospholipid molecules are immobile due to their tight packing) within a more loosely packed “liquid phase” continuum. The AFM images are sensitive to the packing of the phospholipid molecules because the angle of the aliphatic tails determines the topography of the transferred film—the close-packed (solid phase) regions in the phospholipid film are taller and thus brighter than the surrounding loosely packed (liquid phase) regions (Figure 5a). The coexistence of solid and liquid phase regions allowed the visualization of changes induced by the introduction of bile salts to the phospholipid film.Figure 5b illustrates that the addition of bile salts to such a film causes a progressive reduction in the size of the solid-phase regions.

Looking just at a liquid phase region of the phospholipid-bile salt film, it can be seen that the enzyme complex forms close-packed arrays (Figure 7a) if the subphase concentration is high enough (Chu et al., 2010). By repeating the experiment with a galactolipid in place of the phospholipid, we gained insight into how they slow down lipolysis. The galactolipid in question, digalactosyldiacylglycerol (DGDG), has a bulky disaccharide headgroup and cannot form the solid phases seen in the phospholipid films, yet it stands up much better to penetration by the enzyme complex. Figure 7b shows an AFM image of a mixed galactolipid-bile salt monolayer which, when compared with Figure 7a, exhibits a much lower level of penetration by the lipase complex despite the presence of lipase-attracting bile salts.

The AFM data suggest that, in addition to the favorable charge that the bile salts impart to the interface, the enzyme complex also requires space at the interface in order to insert itself. In a pure tightly packed phospholipid film, such as would be found in physiological situations, this is facilitated by the bile salts’ ability to fluidize the molecules—this has a smaller effect with a galactolipid film. We hypothesize that this is because, in the latter case, it is the bulky disaccharide headgroup which acts to hinder the enzyme’s access so that fluidization of the lipid tails by the bile salts becomes less important. By revealing the subtle molecular details of the system, the AFM data show firstly how bile salts aid lipolysis in phospholipid-stabilized emulsions, and secondly help to explain how the introduction of a galactolipid can disrupt the lipolytic enzyme/bile salt synergy.

The authors wish to thank Boon-Seang Chu and Peter J. Wilde, who contributed to the lipolysis section of this article, and the UK’s Biotechnology and Biological Sciences Research Council for funding.