While there may be a small backlash against bottled water, driven in part by concern over disposal of the plastic bottles, there also appears to be a proliferation of new flavors and types of beverages. Many of these require unconventional processing and packaging. This month’s column will take a look at selected beverage categories and some of the processing challenges associated with them. 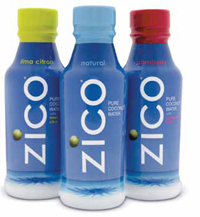 • Tea. Ready-to-drink tea is offered in cans and bottles and presents a processing challenge. Many varieties have added citric acid, allowing them to be hot filled, and often they are artificially sweetened, making them less prone to spoilage. In Europe, some are preserved with Velcorin, a proprietary preservative from Bayer. Velcorin decomposes to methanol, so its concentration is limited to that which results in a maximum level of 250 ppm of methanol. It also is toxic and has a high melting point, so it must be heated to form a liquid that can be metered precisely. If the metering system cools, it is difficult to clean. So far, Velcorin is not used in the United States.

• Fruit-based beverages and juices. Tropical fruits, along with their better-known cousins, such as mango, guava, and papaya, present processing opportunities and challenges. Most are seasonal, meaning most of a year’s supply becomes available over a short time period. Each will have unique physical and chemical characteristics, such as skin, seeds, and enzymes. A typical process for manufacturing juice, puree, or concentrate includes the following steps: washing the fruit; removing the skin or peel; removing the pit or seed; pulping; finishing (fiber removal); heat treatment to inactivate enzymes; and concentration (optional).

Many tropical fruits are fragile and easily bruised. Harvesting is often done by manual labor. This may be inexpensive, but the laborers may be relatively untrained in handling the fruit so as not to cause damage. Transportation from growing areas may be challenging, using pack animals or even people over unpaved trails.

Processing requires support resources, such as clean water, electricity, and waste disposal. There also is an economy of scale requirement in the sense that it takes a certain minimum volume to justify the investment in processing equipment.

It can be difficult to find industrial fruit processing equipment that is small enough for a developing country entrepreneur and yet is rugged, reliable, and efficient. One solution is to rely more heavily on manual labor, which is usually available and inexpensive. At the same time, the venture can provide an income to more people with a relatively low investment.

In a project supported by the U.S. government, the University of Florida is trying to improve mango harvest, transportation, marketing, and processing in Haiti, according to Art Teixeira, Professor of Food Engineering (phone 352-392-1864 x207). One of the project initiatives is to design and fabricate a pack frame to hold standard field crates that can be strapped to donkeys in place of woven baskets, which offer less protection to the fruit.

Another effort will be to design a pulp extraction and preservation process, probably resulting in bulk aseptic bags of single-strength mango puree that can later be mixed into beverages (see process flow chart). Large food companies in the U.S. have expressed interest in a reliable source of mango pulp. Processing close to the source of the fruit, combined with more-careful transportation to the city for export, will mean less waste of the fruit.

Some of the nonthermal processes, such as high hydrostatic pressure and pulsed electric fields, may have applications to beverages. There have been conceptual proposals for a semi-continuous high pressure process for pumpable liquids, but if any have been constructed, there has been little publicity. One natural juice processor commercialized pulsed electric fields, but unfortunately, the business failed and the processing unit was returned to Ohio State University. 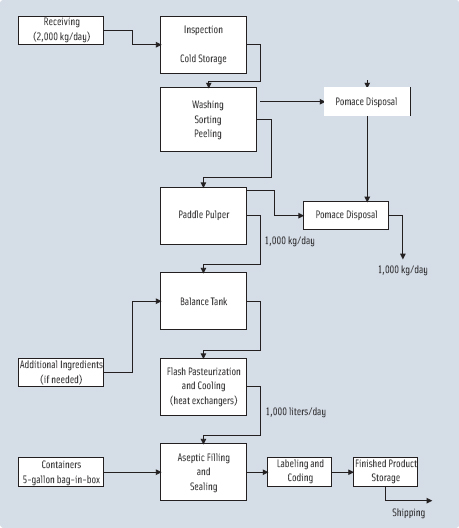 • Flavored and nutritious waters. Coconut water has become a popular beverage, as an electrolyte replacer and thirst quencher. It is probably low acid and so should be retorted to be shelf stable, but may not be. As found in the young nut, coconut water is sterile, but it is hard to imagine gathering and filling it without some risk of contamination. It contains about 5% sugar. It could be pasteurized and distributed refrigerated, like dairy products.

• Beer, wine, and energy drinks. Some other beverages, marketed as energy drinks, have significant amounts of caffeine added, often along with glucose and other sources of calories. Sports drinks have electrolytes and calories intended as thirst quenchers and replacements for nutrients lost in exercise. These are typically hot filled because they have low pH due to added organic acids.

Craft beers continue to be popular, including cases of assorted varieties, called samplers, which have 4–6 varieties in a case of 12 bottles. I’ve wondered how these are actually packed, since most bottling lines have traditionally packed cases directly after filling, capping, warming, and labeling. To merge three other varieties with those from a line would require a lot of space. One way would be to stack bottles on pallets and fill cases in a separate operation, which would also require more space than most breweries usually have available.

Cask-aged beers and Belgian-style ales seem to be popular, indicating a trend away from typically light American lagers. Beers are either filter sterilized or pasteurized by heating after filling. They are usually filled cold, and the heating also serves to prevent condensation, which interferes with labeling and could weaken cases.

Aseptic Processing
Paperboard juice boxes may still be one of the more popular aseptic packages, but stand-up pouches and plastic bottles are also widely used. There are lines in commercial use for dairy-based beverages in aseptic plastic bottles. So far, these are relatively slow because they use linear fillers with only a few filling heads. In Europe, carousel or rotary fillers with many more valves are used, but they have not been approved for use in the U.S. because regulators believe they cannot maintain a laminar flow regime. Laminar air flow means that filtered air flows slowly from the top of the space to the bottom, carrying particles—which may be bacteria or dust—away.

This contrasts with turbulent air flow, in which air velocity is higher and occurs in many directions, keeping particles within the space. “Clean” fillers, meaning they are enclosed, are used for extended shelf life (ESL) products and are less expensive than aseptic fillers, because they lack the rigorous controls and sterilization systems of an aseptic filler. For many products and distribution systems, these are adequate, giving perhaps 45 days of safe shelf life under refrigeration.

Other Ingredients
While many juice-based beverages are sweet, using fruit juice or pulp, there are savory beverages, often based on tomatoes. Companies are exploring how to deliver other nutritious materials to help increase vegetable consumption. Examples include carrots, cucumbers, peppers, broccoli, and peas. These are challenges because often they need to be cooked to be made digestible, they have high fiber content, and their flavors are not universally popular. Also the texture and rheology of vegetable purees prevent them from being appetizing beverages, so they will need to be diluted and probably blended with other flavors.

Efficient extraction of the desired fractions, size reduction to control viscosity, and cooking to make digestible are all relatively new unit operations in beverage processing. In addition, vegetables are typically seasonal, so most of a year’s supply of the vegetables or vegetable-based juices will need to be manufactured in a short time period, because few of them can be easily stored. Bulk aseptic processing and storage is one possible solution. Counter-seasonal supply, from South America and Asia, is another approach. Already, some tomato processors receive tomato paste from Chile, while China has become a source for many raw materials, including apples, garlic, and others. Unfortunately, the quality of some foods from China has been unreliable, and transportation costs can be significant.

The concern of some consumers for greener food, meaning more locally grown and having less of a carbon footprint, can conflict with the interest in exotic tropical fruit flavors and other imported ingredients. For example, the domestic supply of coconuts is probably too small to supply the coconut water demand. Likewise, there are cost advantages to off-season supplies from other parts of the world, but there are also additional costs to consider. At the same time, small producers in developing countries may benefit significantly by exporting fruits, vegetables, teas, cocoa, and coffee to the U.S. Helping them preserve perishable crops is an especially effective form of assistance.