The U.S. food regulatory system is “a ridiculous process,” according to Peter Barton Hutt, Senior Counsel at Covington & Burling LLP. In his opinion, the system is overloaded with laws and regulations that are either ignored or unenforced. Hutt’s provocative pronouncement was just one of the insightful and sometimes controversial perspectives revealed at IFT’s inaugural Food Policy Impact Conference, held December 1, 2011, in Arlington, Virginia. 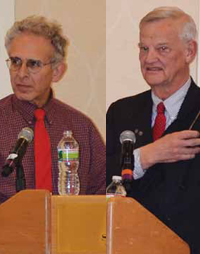 The conference convened experts in food laws and regulations to review and debate U.S. food policy as it pertains to two issues: food safety and food labeling & marketing. Michael Taylor, Deputy Commissioner for Foods, U.S. Food and Drug Administration (FDA), opened the conference with an overview of the FDA Food Safety Modernization Act (FSMA). Passed in January 2011, the FSMA increases the level of accountability on the part of food manufacturers and other food facilities and, for the first time ever, gives the FDA the mandate to require prevention-based controls across the food system and to recall food products.

Although it breaks new ground in the increased duty of compliance, accountability, and agency authority, the FSMA introduces new challenges as well. Jenny Scott, Senior Advisor, FDA Center for Food Safety and Applied Nutrition, said that new preventive controls have broad implications for the food industry. The law defines preventive controls as risk-based, reasonably appropriate procedures and processes that a person knowledgeable about safe-food handling would use to significantly minimize or prevent vulnerabilities identified in a hazard analysis. In this respect, the FSMA may seem very similar to HACCP.

Scott discussed the challenges of distinguishing certain aspects of the FSMA from HACCP as well as ensuring that all food facilities are aware of the FSMA’s requirements. There are 90,000 domestic firms and 100,000 foreign firms that must be informed of the law’s requirements. She said that the FDA is aware of the similarities and will therefore issue a proposed rule that will larify the distinction.

The FDA’s new power with respect to product recalls places more emphasis on product traceability. Brenda Lloyd, Equipment Purchasing Director with United Foodservice Purchasing Co-op LLC (UFPC), discussed how UFPC has been proactive in augmenting its capacity to trace food products. UFPC was one of 55 companies that joined the GS1 Foodservice Initiative in 2009 to standardize product coding globally. She relayed that an industry-led traceability task group is developing guidance materials for companies that wish to voluntarily conform to standards designed to improve product traceability with greater accuracy.

Brian Sterling, CEO of OnTrace Agri-Food Traceability, pointed out that product traceability serves purposes beyond just food recalls. Product tracing can help manage product supply chains, drive increased revenue, and provide more of what consumers really want, he said. According to Sterling, despite the obvious importance of product traceability, U.S. food regulators and the U.S. food industry have made the process unnecessarily difficult. “Without a vision of where you want to [be], it’s really easy to walk down any road and hope that you’re going to get to your destination,” he said.

According to Sterling, a one-size-fits-all solution to tracing the origins of food doesn’t exist because there are way too many businesses involved in way too much commerce. The food industry “is a culture of rugged individualism,” based significantly on “not trusting the people that you work with to get the food on a plate,” he said. The Canadian approach to traceability involved a commitment to a universal vision, recognizing individual stakeholder interests, not their positions. Each stakeholder needed to think not about itself but about how each fit into the food system as a whole. After building trust between different parties, commitment, collaboration, and confidence followed, leading to success.

Marketing and Meandering
Although food companies and regulators agree that food products need to be traceable, there is less agreement between industry and government on food marketing. The marketing of certain foods to individuals under the age of 17 has been implicated as a contributing factor to the skyrocketing rate of obesity among children and teens. In conjunction with the Council of Better Business Bureaus, 10 predominant food & beverage companies introduced the Children’s Food & Beverage Advertising Initiative (CFBAI), pledging to limit their food advertising to children based on certain nutritional standards. However, the Federal Trade Commission (FTC) believed the initiative, which applied only to traditional media, didn’t go far enough. “If you use a cross-promotion with Spiderman or Shrek and advertise it on a children’s TV program, that [food product] would have to meet the CFBAI’s nutritional criteria. But if you just stick [Spiderman or Shrek] on a box of cookies, then it’s not covered,” said Keith Fentonmiller, Senior Attorney with the FTC. As part of an interagency working group, the FTC has developed voluntary nutritional principles for foods marketed to children.

“When [four] agencies that control everything from the planting to the growing to the marketing to the final sale of [food] products … agree that a certain standard makes sense … [then] that’s far more than just a voluntary request,” said Dan Jaffe, Executive Vice President of the Government Relations Association of National Advertisers. He asserted that the CFBAI’s standards are more than sufficient because scientific research has been unable to “arrive at any finding about a causal relationship [between] television advertising [and] obesity.” He also pointed out that the interagency working group’s principles are more restrictive than the recommendations in the 2010 Dietary Guidelines for Americans.

According to Michael Jacobson, Executive Director of the Center for Science in the Public Interest, “It’s outrageous to have companies market junk foods to kids over the Internet, during television shows, and so on.” During a spirited debate with attorney Peter Barton Hutt, Jacobson extolled the benefits of food laws and regulations, saying that, if anything, food policies don’t go far enough. “Past food laws and regulations have been extraordinarily beneficial, and additional ones would help solve some of today’s problems.” He discussed how obesity costs America $150 billion a year in health care and how other diet-related diseases cause hundreds of thousands of unnecessary deaths every year. “To solve these kinds of problems, we need laws, regulations, and stronger enforcement of existing laws.” To illustrate his point, Jacobson expressed his opinion that the GRAS section of the Food, Drug and Cosmetic Act needs to be strengthened. “The way it is now, companies can add ingredients to the food supply without even telling the FDA that they’re adding them. That’s nuts!” he said.

“We’re not going to solve obesity by banning products; we’re not going to solve health problems by banning ingredients,” Hutt countered, calling the myriad of laws and regulations governing food excessive and ineffective. “Much of what is going on today is utterly useless and indeed failing,” he asserted. He referred to the FSMA as “the Food Safety Confusion Act” while expressing his belief that new laws do not solve any food safety problems. In Hutt’s opinion, enforcement of existing laws is the key to food safety. “We’ve become accustomed to the idea [that] if there’s a problem in the country, write a [new] law. We don’t need that,” he said.

To support his stance, Hutt used one of the worst cases of food contamination in U.S. history, involving the Peanut Corporation of America. The company had passed an FDA-contracted inspection just prior to the outbreak of contaminated peanut butter. “If with Peanut Corporation of America, there had been a criminal prosecution of the president of the company and [all of the other responsible people], that’s what wakes up companies across the country. The failure to do that is a dereliction of duty on the part of FDA. If you don’t enforce the law, then you have no law.”

Jacobson concurred that the enforcement of existing laws is poor: “The FDA doesn’t act on a whole bunch of things,” he said. But for many food-related issues, the FDA doesn’t have the clear authority to do something, and new laws give the agency more authority. “Laws help,” Jacobson added. Despite their differences, Jacobson and Hutt somewhat agreed that consumers bear some responsibility. Jacobson admitted that despite more food laws and better dietary guidelines, consumers continue to make poor food choices for the sake of convenience or because they “don’t know how to cook anymore.” Hutt replied that consumers should make their own dietary decisions, and that requires companies “educating people and telling them on the [label] what is in the package.”