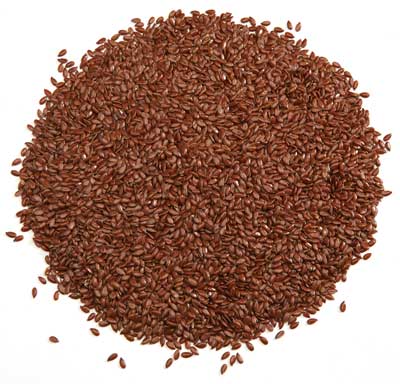 Superfruits and super seeds fit the bill for consumers’ desire for natural, minimally processed, or unprocessed foods. Although there is no universal standard definition of a super seed or superfruit, they are often described as providing a number of nutrients and possessing a nutritional halo with their reported health benefits that go beyond their nutritional profiles.

The appeal of today’s super seeds and superfruits is evident in retail establishments like Costco. A package of Kirkland Dark Chocolate Super Fruits includes blueberries, cranberries, and bing cherries. Dark chocolate–covered açai berries and dark chocolate–covered tart cherries are also available. Chia seeds are offered in bulk as well as being an ingredient called out on the package of Kirkland Signature Trek Mix.

This article will discuss information about some of the super seeds and superfruits available to consumers and their reported health benefits.

While many ingredient manufacturers offer flax or chia in whole seed form, milling the seeds helps the body acquire greater nutritional benefits by increasing the bioavailability of nutrients, explains Rees. “One of the key findings from a 2012 human trial [Nieman et al., 2012] showed omega-3 alpha-linolenic acid (ALA) levels increased 58.4% and eicosapentaenoic acid (EPA) levels 38.6% within the milled chia seed group compared to no increase in the whole seed and control groups.” Glanbia Nutritionals recently added BevGrad ® Chia to its portfolio. It is a finely milled form of chia seed to deliver vegetarian ALA omega-3, fiber, protein, calcium, phytonutrients, and antioxidants in ready-to-drink and ready-to-mix beverages without compromising on the taste or texture.

“Currently flax and chia are the major super seeds that consumers seek out,” says Rees. “They are both high in omega-3 fatty acids from a vegetable source. Despite chia dominating new product launches in 2013–2014, flax is still the best known of the super seeds. Flax also has the most dietary and medical studies to support its health benefits.”

Rees explains that flaxseed offers a good source of protein, fiber, antioxidants, and phytoestrogens in the form of lignans along with omega-3 fatty acids, which independent studies have shown can support cardiovascular health (Rodriguez-Leyva et al., 2010).

Whether in the stands or the dugout, sunflower seeds are oftentimes considered a traditional snack at the baseball park. They provide both monounsaturated and polyunsaturated fats, protein, fiber, vitamin E, and phytochemicals. Information provided by the National Sunflower Association, Bismarck, N.D. (www.sunflowernsa.com), states that sunflower seeds provide 6 g of protein and are an excellent source of vitamin E. One ounce of sunflower seeds provides 76% of the Recommended Dietary Allowance for vitamin E. In addition, sunflower seeds contain phytochemicals like choline, lignan, phenolic acids, and betaine. Phillips et al. (2005) found that sunflower kernels had the highest levels of phytosterols among sesame seeds, Brazil nuts, and pistachios.

A great snack, pumpkin seeds are packed with nutrients. They offer a source of protein, fiber, manganese, magnesium, and phosphorus. Kathie’s Kitchen, North Haven, Conn. (www.superseedz.com), offers SuperSeedz ® Gourmet Pumpkin Seeds. They contain 8 g of protein per oz, 2 mg of iron, and 2 mg of zinc, and they are cholesterol free and allergen friendly.

Superfruits
“Although the term ‘superfruit’ has not been strictly defined by any regulatory body, it has been used to describe fruits which are exceptionally rich in nutrients, primarily antioxidants, and can provide potential health benefits such as preventing the development of chronic diseases such as cardiovascular disease,” says Tom Payne,industry specialist for the U.S. Highbush Blueberry Council (USHBC), Folsom, Calif. (www.blueberry.org). “Superfruits contain a variety of phytonutrients; many contain high amounts of flavonoids such as anthocyanins, which give berries such as blueberries their deep color and also provide antioxidant and anti-inflammatory activity. Oxidation and inflammation may be components of various chronic diseases, thus components in superfruits may help protect against such diseases. 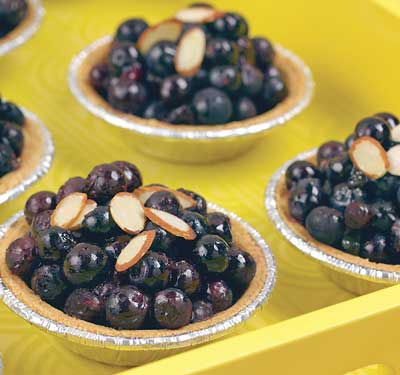 “Blueberries have always been popular because of their natural deliciousness, but their popularity has soared with the advent of antioxidant awareness. Consumers see blueberries as a value-added ingredient linked to heart health, anti-aging properties, cancer prevention, improved eyesight, and better memory.”

Though blueberries themselves are not a cure-all, they contain a number of substances that are thought to have health benefits, says Payne. “These substances include, but are not limited to, fructose, fiber, vitamins, minerals, and antioxidants. Antioxidants thus far seem to have the most conclusive role in the prevention/delaying of such diseases as cancer, heart disease, and the aging process.”

Johnson et al. (2015) indicated that daily blueberry consumption may reduce blood pressure and arterial stiffness, which may be due, in part, to increased nitric oxide production. In the 8-week trial, 48 postmenopausal women with prehypertension or stage 1 hypertension were randomly assigned to receive either 22 g of freeze-dried blueberry powder or 22 g of control powder. After 8 weeks, systolic blood pressure and diastolic blood pressure were significantly lower than baseline levels. Nitric oxide levels at 8 weeks were greater in the subjects who consumed the blueberry powder compared with baseline values.

“Blueberry-related scientific studies ranging from antioxidants, anti-aging and cancer, eyesight, brain function, diabetes, and other topics are constantly being added to the USHBC Health Research Library and Database,” says Payne. “These include women’s health, aging issues, bone, brain, eye, liver, and skin health, diabetes, obesity, urinary tract, cancer, and even beauty from within.”

Superfruits such as blueberries are more common and mainstream, whereas others are considered exotic or are lesser known. Fruits like baobab, mangosteen, and goji berries, which are high in antioxidants, don’t have as much attention yet, but they could find their way into the mainstream market like the popular açai berry.

Açai berries are an example of a lesser-known fruit growing in mainstream superfruit status. Laboratory tests show that açai is a rich source of anthocyanins and has a fatty acid ratio similar to olive oil, according to information from iTi Tropicals Inc., Lawrenceville, N.J. (www.ititropicals.com). Açai berries have been shown to have anti-inflammatory properties. iTi Tropicals supplies açai puree with 12% and 14% solid content and clarified açai juice and açai juice concentrate. 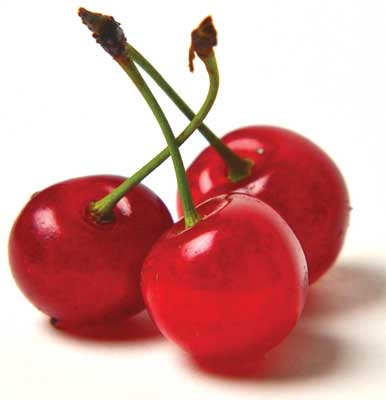 “Tart cherries have developed a dedicated following based on their distinctive sour-sweet taste and functional benefits,” says Jeff Manning, chief marketing officer at the Cherry Marketing Institute. “They also combine beautifully with the flavor of dark chocolate and almonds.”

Tart cherries are high in anthocyanins and have high antioxidant activity. Reported benefits include enhanced sleep, anti-inflammation in arthritis and gout, and sports recovery. “The pain associated with exercise involves muscle damage, inflammation, and oxidative stress,” explains Manning. “Tart cherries seem to help with all three due to the concentrated amounts of anthocyanins inside. Studies suggest Montmorency tart cherry juice has the ability to reduce muscle pain and weakness after bouts of intense strength training, as well as after long-distance running.”

The subjects who consumed Montmorency tart cherry maintained muscle function and experienced a reduction in certain inflammatory responses following the simulated cycling race compared to those who consumed the placebo drink. The tart cherry juice also appeared to maintain exercise efficiency, reducing the amount of oxygen muscles need to do work. The researchers concluded that the results suggested that Montmorency cherry concentrate can be an efficacious functional food for accelerating recovery and reducing exercise-induced inflammation following strenuous cycling exercise.

Avocados have grown beyond being the main ingredient in guacamole as consumers gain more understanding about healthy monounsaturated fats in avocados. The versatility of avocados in recipes is also appealing. A quick search on the popular website Pinterest reveals countless recipes for avocados, including chickpea, avocado, and feta salad, avocado chicken salad, healthy avocado cookies, avocado hummus, and even avocado mac and cheese.

Wang et al. (2015) demonstrated that avocados have beneficial effects on cardio-metabolic risk factors that extend beyond their heart-healthy fatty acid profile. In their study of 45 overweight or obese subjects, the researchers found that the subjects on a moderate-fat diet who ate a Hass avocado every day had lower bad cholesterol than those on a similar diet without eating an avocado a day or those on a lower-fat diet (American Heart Association, 2015). Several additional blood measurements (total cholesterol, triglycerides, small dense LDL, non-HDL cholesterol, and others) were also more favorable in the subjects who ate the avocados vs. the subjects in the other groups.

More than a side garnish at Thanksgiving dinners, cranberries can be found in salads, juice, trail mixes, and portable snacks. Cranberries have long been associated with benefiting urinary tract health, but according to the Cranberry Institute’s Cranberry and Human Health Research Review (Cranberry Institute, 2014), cranberries have also been shown to benefit heart health, cancer prevention, oral health, glycemic response, and infections such as those caused by Helicobacter pylori bacteria.

Polyphenols such as proanthocyanidins (PACs) in cranberries play a potential role in these observed benefits. Investigations have evaluated the role of PACs in the adhesion of bacteria to cells such as those that cause infections in the urinary tract and the gastrointestinal system (including the mouth and stomach). PACs have been reported to possess antimicrobial, anti-adhesion, antioxidant, and anti-inflammatory properties.


Members Only: Read more about superfruits and superseeds online at www.ift.org. Type the keywords into the search box at the upper right side of the home page.