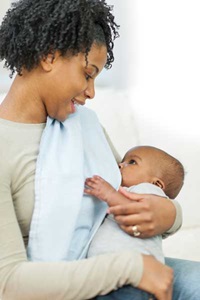 Ensuring the health of babies begins before they are born with proper prenatal care for mothers and continues after birth with proper feeding of infants. The medical establishment considers breast milk the best food that babies should receive after they are born because it contains proteins, carbohydrates, and fats in the proper proportions to help meet infants’ nutritional needs; it is rich in essential nutrients that help support healthy growth and development; its proteins are easy to digest; it contains hundreds of prebiotics that help support digestive health and a healthy immune system; and it may protect against the development of some allergies. The American Academy of Pediatrics recommends that infants be exclusively breastfed for about the first six months with continued breastfeeding alongside introduction of complementary foods for at least one year. According to the Centers for Disease Control and Prevention (CDC), 81.1% of infants born in the United States in 2013 (the most recent data available) started with breastfeeding, 51.8% were breastfeeding at six months, and 30.7% were breastfeeding at 12 months. But for mothers who can’t breastfeed or don’t want to breastfeed, infant formula is the way to go.

The Federal Food, Drug, and Cosmetic Act defines infant formula as “a food which purports to be or is represented for special dietary use solely as a food for infants by reason of its simulation of human milk or its suitability as a complete or partial substitute for human milk.” The U.S. Food and Drug Administration (FDA) has established regulations that relate to the composition, efficacy, quality, production, and marketing of infant formulas in the United States and defines infants as persons not more than 12 months old.

According to the FDA, an estimated one million infants in the United States are fed infant formula from birth and that by three months of age about 2.7 million infants rely on infant formula for at least part of their nutrition. The Infant Formula Act enacted in 1980 and amended in 1986 plus the FDA’s infant formula regulations ensure the safety and nutritional value of infant formulas. The ingredients used in infant formulas must be generally recognized as safe (GRAS), meet the FDA’s food additive regulations, or be authorized by prior sanction. The scientific evidence mandated for documenting the safety of these ingredients includes chemical characterization, anticipated exposure level, and data from animal models and clinical studies.

The FDA does not approve infant formulas before they can be marketed. However, all infant formulas marketed in the United States must meet the nutrient requirements, and infant formula manufacturers must notify the FDA prior to marketing a new or modified formula. That notification must include evidence that the infant formula supports normal physical growth when fed as a sole source of nutrition. This can be achieved through acceptable clinical studies that demonstrate adequate growth, using standards advocated by the American Academy of Pediatrics and published by the CDC. The FDA completed 33 reviews of new infant formula notifications during fiscal year 2015 (October 2014 through September 2015) and 20 during fiscal year 2016 (October 2015 through September 2016).

In June 2014 the agency issued the final rule “Current Good Manufacturing Practices, Quality Control Procedures, Quality Factors, Notification Requirements, and Records and Reports, for Infant Formula,” which requires manufacturers of infant formula to use current good manufacturing practices specifically designed for infant formula, test for the presence of Salmonella and Cronobacter, demonstrate that the infant formulas support normal physical growth and that the protein component has sufficient biological quality, and test infant formulas for nutrient content before entering the market and at the end of the product’s shelf life.

The agency has also issued several guidance documents and draft guidance documents for manufacturers of infant formulas and exempt infant formulas, including “Demonstration of the Quality Factor Requirements Under 21 CFR 106.96(i) for ‘Eligible’ Infant Formulas” in June 2014; “Exempt Infant Formula Production: Current Good Manufacturing Practices (CGMPs), Quality Control Procedures, Conduct of Audits, and Records and Reports” in April 2016; “Labeling of Infant Formula” and “Substantiation for Structure/Function Claims Made in Infant Formula Labels and Labeling” in September 2016; and “Preparation of Food Contact Notifications for Food Contact Substances in Contact with Infant Formula and/or Human Milk” in December 2016. The FDA also maintains the webpage “Exempt Infant Formulas Marketed in the United States by Manufacturer and Category.”

Evaluating Ingredients
At the annual event of the Institute of Food Technologists (IFT) in July 2016, speakers presented the symposium “Infant Formula Nutrition: Regulatory and Safety Evaluation of Ingredients.” The speakers discussed infant formula regulations, the GRAS determination of ingredients, novel ingredients being considered for use in infant formula, and preclinical testing requirements. The introduction to the symposium emphasized that research continues to increase the understanding of human milk biology and its physiological functions in newborns and that the safety of some substances in human milk, such as immunoglobulins, cellular membranes, uniquely structured phospholipids, and complex carbohydrates, may require extensive research to ensure safety and efficacy on behalf of infants.

Assar described the notification process. Manufacturers wanting to market a new infant formula or an existing infant formula that has undergone a major change in formulation, processing, or packaging must notify the FDA 90 days before marketing the product. The notification must include the name and description of the product, the formulation, the effects of changed ingredients on nutrient levels, processing information, how the infant formula meets the quality factor requirements (normal physical growth and biological quality of the protein), compliance with nutrient content requirements, the basis for each ingredient’s meeting the safety and suitability requirements, and exemption requests, if applicable.

She said that the FDA conducts yearly inspections of all manufacturing facilities to determine whether they meet CGMPs, follow quality control procedures, and keep records and reports, including complaint records. The agency also inspects new facilities during early production runs and conducts special inspections as needed. If the FDA determines that an infant formula presents a risk to human health, it can initiate a mandatory recall.

She emphasized that a GRAS evaluation for infant formula ingredients must rely on a risk assessment process that includes hazard identification, hazard characterization, exposure assessment, and risk characterization. The methods for assessing toxicity include computational toxicology, structure-activity relationships, in vitro tests, short-term and long-term animal bioassays, human studies, clinical trials, epidemiology, and post-marketing surveillance. And she described successful strategies employed in determining the GRAS status of canola oil used as a source of alpha-linolenic acid in infant formula, peroxidase derived from a genetically modified strain of Aspergillus niger used in infant formula, galacto-oligosaccharide, and lactoferrin derived from cow’s milk.

Roger A. Clemens, adjunct professor of pharmacology and pharmaceutical sciences, University of Southern California, said that recent innovations in infant formulas include technologies to reduce the allergenicity of cow’s milk and soy protein and the addition of docosahexaenoic acid (DHA) for improved cognitive development and visual acuity. He pointed out that breast milk is composed of carbohydrate (lactose and oligosaccharides), protein (casein and whey), and fats (cholesterol, linoleic acid, DHA, carnitine (which is important in fat metabolism), and lipase enzymes for fat digestion). He said that the human milk fat globule membrane (MFGM), a lipid fraction rich in phospholipids and cholesterol, contains more than 190 different proteins that may function as cell protectants, modulate cell signaling, and have anticancer and antimicrobial effects. He also said that since infant formulas use fat sourced from vegetable oils instead of milk fat, they contain no MFGM and that bovine MFGM, a byproduct of butter production with many similarities to human MFGM, may be beneficial to include in infant formula to aid in brain and cognitive development. Future innovations in formulation of infant formulas, he said, will require an increased understanding of human milk biology, infant physiology, and strategic, progressive clinical research.

Thorsrud said that a number of different animal models are available for infant formula testing, including in vivo, in utero, in vitro, and in silico (computer modeling). He described the advantages and disadvantages of using various species for the testing, including rodents, dogs, primates, and pigs, and concluded that the neonatal piglet appears to be the most relevant research model for testing infant formulas because of the similarities in anatomy, physiology, dietary requirements, and immune system to those of human infants during the nursing period.

There are four major manufacturers and marketers of infant formula in the United States. Perrigo Nutritionals (perrigo.com) manufactures store-branded infant formula, and the others are as follows: 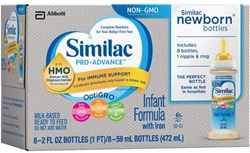 Abbott (abbott.com) offers the Similac line of infant formulas, including the new products Similac PRO-ADVANCE and Similac PRO-SENSITIVE, said to be the first and only infant formulas in the United States with 2’-FL human milk oligosaccharide, an immune system–nour…

There are four major manufacturers and marketers of infant formula in the United States. Perrigo Nutritionals (perrigo.com) manufactures store-branded infant formula, and the others are as follows:

Abbott (abbott.com) offers the Similac line of infant formulas, including the new products Similac PRO-ADVANCE and Similac PRO-SENSITIVE, said to be the first and only infant formulas in the United States with 2’-FL human milk oligosaccharide, an immune system–nourishing prebiotic previously only found at significant levels in breast milk. The company also offers a complete line of Similac products designed with its OptiGROblend of DHA, lutein, and vitamin E to help support brain and eye development. Similac PRO-SENSITIVE is designed to ease fussiness, gassiness, and mild spit-up due to lactose sensitivity; Similac TOTAL COMFORTis a partially hydrolyzed formula for babies who experience discomfort from persistent feeding difficulties; PURE BLISS by Similac is a non-GMO formula that starts with fresh milk from grass-fed cows; and Similac NEOSURE promotes catch-up growth in premature babies. 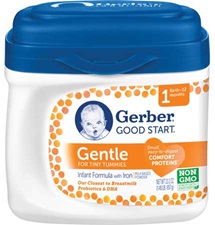 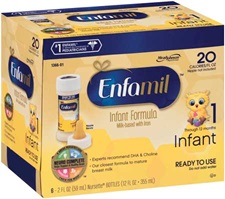 Mead Johnson Nutrition (meadjohnson.com) offers the Enfamil line of infant formulas, including Enfamil Infant,which meets the nutritional needs of babies aged 0 months to 12 months; Enfamil Enspire, which contains MFGM and lactoferrin, is said to be the company’s closest formula to breast milk and is designed to provide complete nutrition for babies aged 0 months to 12 months; Enfamil Gentlease, for gassy and fussy babies; Enfamil Reguline, designed to promote comfortable stools; Enfamil A.R., to reduce spit-ups; Enfamil ProSobee, a soy-based formula designed to ease fussiness and gas due to sensitivity to milk-based formula; Nutramigen, for the dietary management of infants allergic to cow’s milk; and Nutramigen with Enflora LGG, which contains the probiotic Lactobacillus rhamnosus GG. Nutramigen contains a milk protein that is hydrolyzed and reduced in size to reduce allergic reactions to protein in cow’s milk and DHA and arachidonic acid, which are also found in breast milk and are building blocks for a baby’s brain and eyes. The company also produces Enfamil Premature products providing levels of nutrients and DHA for premature newborns and low-birth-weight infants.